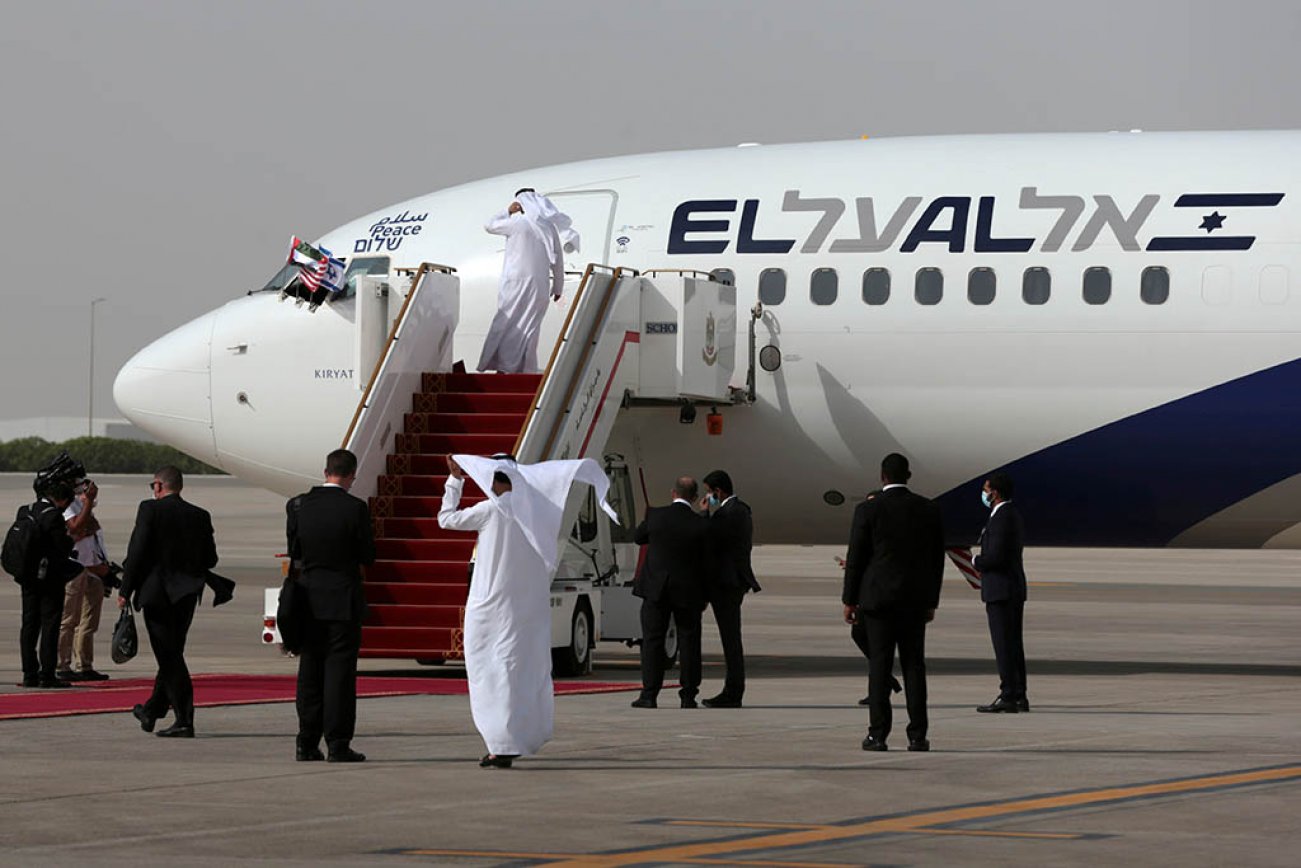 Riyadh will benefit from Abu Dhabi’s boldness as a trailblazer. It will have the chance to gauge how the region and the Arab world react.

With the historic normalization of relations between Israel and the UAE announced on August 13, the question many have been asking is: who’s next? Although initial expectations pointed at Bahrain and Oman as the most likely to follow suit, the possibility of Israel and Saudi Arabia establishing full diplomatic relations has undoubtedly received the most attention.

It is easy to understand why. Saudi Arabia is the Arab world’s biggest economy (in terms of GDP) and a leading actor in the Gulf, which automatically makes a scenario of peace with Israel more significant than that of the UAE. With a shared enemy—Iran—coordination between Saudi Arabia and Israel in the security field theoretically makes sense.  Both countries have signaled in recent years that they maintain relations despite officially still being away from each other. In November 2017, General Gadi Eisenkot, the Israeli army’s chief of staff at the time, stated that Tel Aviv was ready to exchange intelligence information with Riyadh to counteract Iran, adding that there were many shared interests between the two countries. Just last month, a verified Twitter account linked to the Saudi embassy in Washington posted that the Saudi Council of Ministers had decided to hire Israeli cybersecurity firm Check Point Software to integrate the development of Neom, the kingdom’s planned megacity that is a central part of Vision 2030. Triggered by the threat that stems from a common enemy, Israel and Saudi Arabia have apparently been developing covert relations that focus on but also transcend the security field, embracing technology as an important part. Therefore, analysts have delved into the question of whether the kingdom would follow the UAE’s example.

The most realistic answer, however, is that Saudi Arabia will not rush to follow in the UAE’s footsteps and normalize relations with Israel anytime soon. By following suit, the kingdom would likely suffer a much fiercer backlash from the Arab community than the UAE mainly because it is the custodian of the two holy mosques of Mecca and Medina.

While the tensions between Saudi Arabia and Iran are not new, and are unrelated to Israel (in fact the opposite is true as the rapprochement between Israel and Saudi Arabia owes much to Iran), an official rapprochement would likely boost Iran’s image as the last defender of the Palestinian cause, and cement its “Resistance Axis” narrative—mitigating the damage done by its intervention in Syria. Fighting Saudi Arabia would equate fighting Israel in a much more concrete way than before.

Beyond that, jihadist groups also pose a significant threat should the kingdom move toward normalization. ISIS condemns the Saudi government for two main reasons. The alleged support (or “tolerance”—in their views) for Shia Muslims in the kingdom, whose faith they consider heretical, and Riyadh’s proximity to the west, mainly the United States. Over the years, Saudi security forces have already arrested many Saudi citizens accused of having joined ISIS—with estimates suggesting hundreds of Saudis may have joined the group over the years. The Sunni jihadist group’s 2016 coordinated attacks on the kingdom can be seen as symbols of that rhetoric. One bomber struck near the U.S. consulate in Jeddah and another struck close to a mosque that belongs to the Shia minority. For Riyadh, establishing ties with Israel would mean going more deeply into cooperation with the United States, likely further increasing anti-Western/American sentiment within the jihadist movement and consequently its threat.

At this time, the decision by Bahrain (which often acts as a Saudi “test pilot” in terms of foreign policy) to rule out normalization with Israel suggests Riyadh has no plans to follow the UAE’s example.

That is not to say, however, that Saudi Arabia has closed the door on the normalization of relations. The kingdom’s strategy is likely to wait and see what the reaction towards the UAE’s groundbreaking decision will be.

The fact that the flight carrying the Israeli and U.S. delegations to Abu Dhabi on August 31 flew over Saudi Arabia, and the subsequent Saudi announcement allowing flights to and from the UAE “from all countries” to use its airspace, show that the kingdom is at least not opposed to the idea. Underscoring this assessment, Saudi prince Turki al-Faisal, a former ambassador to Washington and ex-intelligence chief, stated that the UAE’s decision was comprehensible since it secured in exchange the suspension of Israeli annexation plans. Ironically, even if Saudi Arabia did wish to establish relations with Israel now, the halt to annexation justification can no longer be used.

Things could, however, change if and when Crown Prince Mohammed bin Salman (MBS) ascends to the throne. King Salman is a strong supporter of the Palestinian cause, having voiced such support on various occasions, such as when he reaffirmed on a phone call with President Donald Trump “the kingdom’s steadfast position toward the Palestinian issue and the legitimate rights of the Palestinian people to an independent state with Jerusalem as its capital.” These comments came after MBS stated that Israelis had the right to live peacefully on their own land.

With King Salman still in power, it is hard to imagine normalization taking place. On the other hand, when MBS ascends to full control of the kingdom there may be more room for negotiations, especially if that coincides with a second term for Trump at the White House. MBS’s already close relationship with Trump himself and his son-in-law and senior adviser Jared Kushner could play an important role in that matter.

As of now, while the two countries could enhance their not-so-covert cooperation amid the Israel-UAE deal, a similar accord seems unlikely. Saudi Arabia still has much to lose from officialising its ties with Israel due to its geopolitical and religious centrality in the region. Therefore, the kingdom’s most likely attitude is to wait and see. Ultimately, Riyadh will benefit from Abu Dhabi’s boldness as a trailblazer. It will have the chance to gauge how the region and the Arab world react to the agreement, being unharmed if there is a major blowback or having time to prepare a strategy in case it eventually deems a deal to be advantageous—without any losses for waiting.

Marco Túlio Lara is a Regional Security Analyst at Le Beck International, a geopolitical security consultancy based in the Middle East.