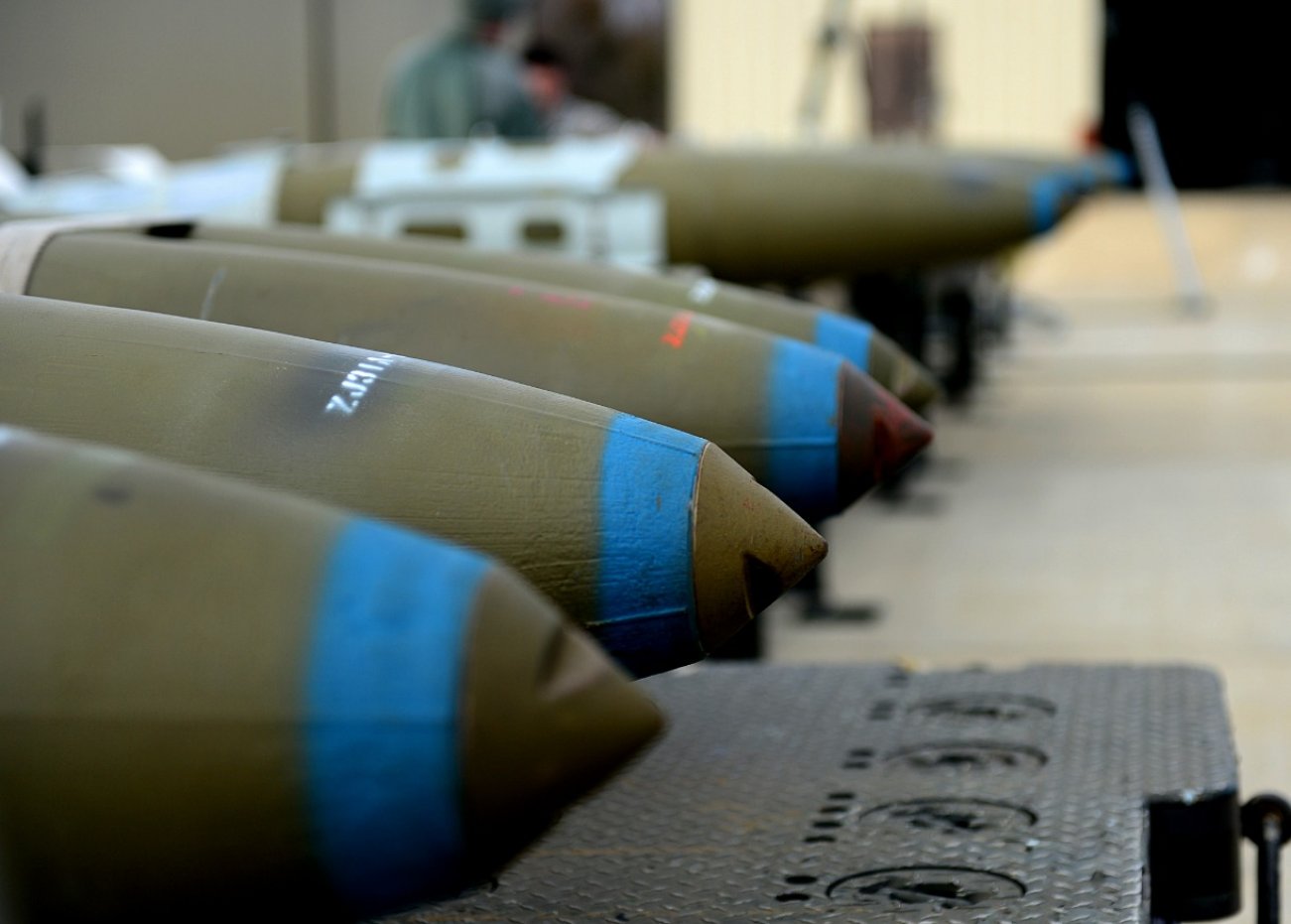 The United States will fight ISIS with precision-guided munitions, and apparently little else.

Here’s What You Need To Remember: There are at least some reasons to suspect ISIS may prove a tougher nut than the previous regimes that have collapsed under a PGM onslaught. For one, ISIS cadres appear more dedicated and more combat-hardened than the Gaddafi Loyalist forces of 2011 or the 2001 era Taliban.

How has the growth of the Precision-Guided Munitions (PGM) complex changed the balance of international power? More specifically, how has the U.S. military’s embrace of this system of weapons affected its ability to accomplish U.S. national goals? The president’s decision to pursue the war against ISIS strictly through the means of airpower and seapower makes the question particularly relevant. The United States will fight ISIS with precision-guided munitions, and apparently little else. It’s worth asking how effective they are in accomplishing national ends. The answer, it turns out, is surprisingly mixed.

Last year, Barry Watts contributed an outstanding article to The National Interest on ways in which the PGM has matched, exceeded, and fallen short of expectations based on a much longer monograph for the Center for Strategic and Budgetary Assessment, Watts concentrated on differences between the expectations of early “Revolution in Military Affairs (RMA)” theorists and the actual record of U.S. PGM use. Watts also asked why other countries have been so slow to develop their own systems of support for the use of precision-guided munitions.

In contrast, this article concentrates on an evaluation of the effect of PGM munitions on the ability of the United States to accomplish its interests through military means. The possession of a nearly unique class of weapons would presumably convey upon the United States a massive advantage on the international stage, potentially beyond the advantages that the United States already enjoyed by virtue of its great size and wealth. For any serious assessment, we need to consider the technical effects of PGMs against the political impact of the end of the Cold War. Both have allowed the United States to fight wars differently, and to fight wars in which it might not otherwise have been engaged.

In short, we can imagine that the growth of the PGM complex would have allowed the United States to fight wars more cheaply, with a better chance of success, and with lower overall costs in terms of blood and treasure. We would expect these effects to exist along with the huge increase in relative American power that accompanied the collapse of the USSR.

The first elements of the modern American PGM complex emerged towards the end of the Vietnam War, where the use of laser and video guided bombs dramatically increased accuracy in the final months of the conflict. Over the 1970s and 1980s, PGMs became deeply integrated into U.S. plans to fight the Soviet Union. They played a small role in the 1989 invasion of Panama, and a much larger role in the 1991 U.S.-led war against Iraq.

In the first Iraq War, the United States used PGMs against Iraqi tactical, operational and strategic targets, severely attriting Iraqi forces without fully destroying either Iraqi command and control or the willingness of elite Iraqi forces to fight. PGMs made the war quicker, easier, and probably less painful for the U.S. military, but beyond this did not transform the final outcome.

Arguably, the existence of PGMs made possible the 1999 Kosovo War, where the United States and its NATO allies used precision airpower to push Serbia out of Kosovo. Had the United States not had weapons available that could strike at Serbian military, economic and political power without causing enormous civilian casualties, it is unlikely that NATO would have intervened. Even the relatively modest Serbian civilian casualties tested the commitment of many NATO partners.

As Watts argues, the lack of strong competitors to Israel and the United States within the PGM field is remarkable. U.S. allies have demonstrated great reluctance in developing the full systems necessary to generate their own strike complexes, instead relying on U.S. capabilities. This is not to say that France, the United Kingdom, Italy, Canada and a few others cannot fulfill the demands of multilateral operations, or even of certain small-scale operations of their own.

Kosovo was surely important, but it was in the Wars on Terror that PGMs began to have a major systemic effect. In brief, PGMs make the Afghan Model possible. They allow the United States and its allies to defeat governments and quasigovernmental organizations through a combination of special forces, precision airpower and local proxies. Having won the first round of the Afghan War through such methods in 2001, the United States replayed the campaign in Libya in 2011, and seeks to replay it one more time against ISIS.

PGMs have also enabled the long-running drone campaigns that the United States has conducted in Somalia, Yemen and Pakistan, making the wars relatively bloodless from the U.S. point of view. Advocates insist that they’ve also made the wars less costly for the target populations, although the campaigns might not have happened at all in the absence of precision weaponry.

The Second Iraq War was more of a conventional conflict, undertaken for reasons that now appear absurd, but are more connected with America’s hegemonic moment than with the opportunity granted by a particular system of weapons. PGMs affected the operational and tactical conduct of the early stages of the war, as well as the counterinsurgency campaigns that ensued in both Iraq and Afghanistan, but didn’t fundamentally change the nature of the conflict, or the reasons for fighting it.

The growth of the PGM complex has spurred several types of resistance. From a legal point of view, precision-guided munitions may actually have complicated the projection of U.S. power. The ceiling for concern over civilian deaths has dropped precipitously, certainly since Vietnam and even since the First Gulf War and the Kosovo War.

The success of PGMs has generated difficult, potentially unreachable expectations with respect to the ability of U.S. military forces to discriminate between soldier and civilian. But many civilian deaths stem not from inaccurate weapons, but from weak intelligence, and intelligence invariably has a probabilistic quality that technology cannot unlock. This has resulted in PGMs becoming the source of legal and popular resistance in ways that were difficult to imagine forty years ago. A stray bomb from a B-52 might hit a school in Hanoi; tragic, but such things happen. A precision-guided missile destroying a home full of refugees today feels much more deliberate.

Potential targets have a sense of how the United States and its allies respond to the likelihood of civilian casualties, and have modified their behaviors accordingly. The ability of insurgents and fighters in Iraq and Afghanistan to maintain their campaigns, with different tactics but the same essential forms as insurgents a century ago, suggests hard limitations on the usefulness of the PGM complex for certain military tasks.

Future improvements to the reconnaissance-strike complex will likely come on the margins. We can build weapons that can strike farther, faster, and with better terminal guidance and loiter capability that allows missiles to become opportunistic, and improves their ability to hit moving targets. On the intel side, surveillance and analytical techniques can help further tighten the noose around targets (whether installations or individuals), but it’s hard to imagine major leaps that prevent the accidental targeting of civilians.

Conclusions, and the Future

The growth of the PGM complex appears to have had a significant, independent effect on how the United States uses military force to accomplish national ends. Precision-guided munitions helped the United States military destroy an Afghan government in a few months, with minimal footprint. They enabled the United States and its allies to force a recalcitrant Serbia to abandon one of its most prized provinces without a conventional ground fight. They allowed the United States to defeat the outsized military establishment of Iraq on two separate occasions, with casualties far lower than we had any right to expect. They even made it possible for a half-hearted coalition to overthrow the regime of a Libyan dictator who had remained in power for four decades.

Have PGMs made war easier from a domestic political perspective? Again, answering the question depends on assessing the impact of PGMs against the effect of the end of the Cold War. Without the Soviet Union, the United States would naturally find it easier to intervene in targets of interest. The collapse of the USSR may also have increased the net chaos in the international system, leading to the proliferation of targets of interest. However, even with this prior few analysts could have expected that the United States would conduct precision air campaigns in Iraq, Syria, Yemen, Somalia, Afghanistan and Pakistan, much less simultaneously.

However, there are at least some reasons to suspect ISIS may prove a tougher nut than the previous regimes that have collapsed under a PGM onslaught. For one, ISIS cadres appear more dedicated and more combat-hardened than the Gaddafi Loyalist forces of 2011 or the 2001 era Taliban. Having watched both campaigns from afar (and in some cases, potentially, from close up), ISIS fighters have a much better sense of the capabilities of an American PGM led campaign than the previous organizations. Western special forces, key to success in both 2001 and 2011, will apparently be in shorter supply this time around (although this could change). Finally, the forces arrayed against ISIS, in particular the moderate Syrian rebels and the Iraqi Army, appear to fall short even of the Afghan Northern Alliance and the ragtag anti-Gaddafi coalition. Only Kurdish militia forces and the regular units of the Syrian Army have thus far demonstrated the interest and capacity to fight ISIS; the former has little interest in pushing beyond a limited geographic area, and the latter poses deep political problems that the United States may find unsolvable, even with the most accurate weapons the military-industrial complex can provide.

Robert Farley is an assistant professor at the Patterson School of Diplomacy and International Commerce. His work includes military doctrine, national security, and maritime affairs. He blogs at Lawyers, Guns and Money and Information Dissemination and The Diplomat. Follow him on Twitter:@drfarls. This article first appeared several years ago.