President Joe Biden’s welcoming of French President Emmanuel Macron at the first White House state visit on Thursday since the U.S. Democrat took power in early 2021, is being celebrated by officials from both countries as a recognition of France’s status as America’s oldest ally.

The visit also highlights the unique way that Macron has raised France’s profile on the world stage, and particularly in the United States. Since he swept to power in 2017, Macron has launched a flurry of international initiatives that have made him one of the most active global leaders.

From Beirut to Bangkok, and from the Kremlin to the White House, he has sought to place himself at the center of every crisis, with a flair for seizing the moment.

At the White House, Macron is expected to confront Biden over new U.S. subsidies riling European leaders, and the two leaders may disagree over the endgame in Ukraine and China policy, experts say.

But Macron’s importance to Washington is clear, former and current officials from both countries say. Notably, he was also the first foreign leader former President Donald Trump invited for a formal state visit.

Given the uncertainties coming from London, Berlin or Rome in recent years and “although the French vision and strategy is not always the one the U.S. would like, at least it is quite readable and consistent,” said Mathieu Droin, a former French foreign ministry official and visiting fellow at the Center for Strategic and International Studies in Washington.

Supporters say Macron has brought energy and creativity to the staid world of diplomacy, with his cheeky campaign to “Make Our Planet Great Again” for instance or a new European forum (the ECP) to unify Europeans against Russia.

Critics say his provocative style can backfire and that he has divided Western allies with his scathing comments about Nato’s “brain death” in 2019, and his views on Russian President Vladimir Putin.

Still, senior Biden administration officials credit the French president for being a leader within the G7, NATO, the U.N. Security Council, and for boosting the European Union’s support for Ukraine as it tries to repel a Russian invasion.

“If you just look at the last year, France has literally been at the center of almost every single national security issue that matters to the American people and to our allies,” White House national security spokesperson John Kirby said.

The White House defends the bill as necessary to boost the electric vehicle industry and other clean energy initiatives, saying subsidies play an important role.

Kirby told reporters traveling with Macron on Tuesday that there have already been “very productive discussions” on the IRA and that “the team here is exploring options”.

Biden and Macron expect to consult on how to further help Ukraine as it faces winter with many electric power facilities bombed by Russia, the officials said. Macron is hosting an international conference on the matter in Paris on Dec. 13.

They also plan to discuss China, after both met with Chinese President Xi Jinping two weeks ago in Bali and before Macron visits Beijing early next year. Macron is exploring a “third way” on China, neither confrontational nor naive, while Biden has urged his fellow NATO leaders to stand up to China’s authoritarianism and growing military might.

“Our views on China are not identical. But I think there is a strong view that we should be speaking from a common script in response to China,” said one of the U.S. officials.

Asked why Macron got the honor of being Biden’s first state visitor, the White House cited Macron’s “longevity in the job” and his involvement in European and global affairs.

“He has exuded leadership, certainly inside the G7, for the longest of any of us, including the president,” Kirby said. “And I think this is also recognition of his uniquely individual leadership on the Continent.”

The visit comes a year after Macron was angered by a deal between Australia, Britain and the United States in which Australia will get American-made nuclear-powered submarines instead of the diesel subs it had contracted to buy from France.

The French president was so perturbed at being blindsided by the deal that scrapped a multi-billion dollar contract for France that he recalled the French ambassador to the United States, Philippe Etienne, back to Paris for consultations.

After Biden apologized publicly, Macron seemed less than mollified, saying “Trust is like love: Declarations are good, but proof is better.”

The French official, speaking to reporters on condition of anonymity, said the two governments had moved past the contretemps and that France had gotten closer coordination on the Indo-Pacific region as a result.

Macron arrives on Wednesday and will visit NASA headquarters with Vice President Kamala Harris to highlight U.S.-French cooperation in space before having a private dinner with Biden and his wife Jill, ahead of Thursday’s state dinner.

Ultimately, “France is seen as a country that doesn’t refrain from speaking its mind, which is sometimes aggravating but it’s also what makes it a valuable partner,” Droin said. 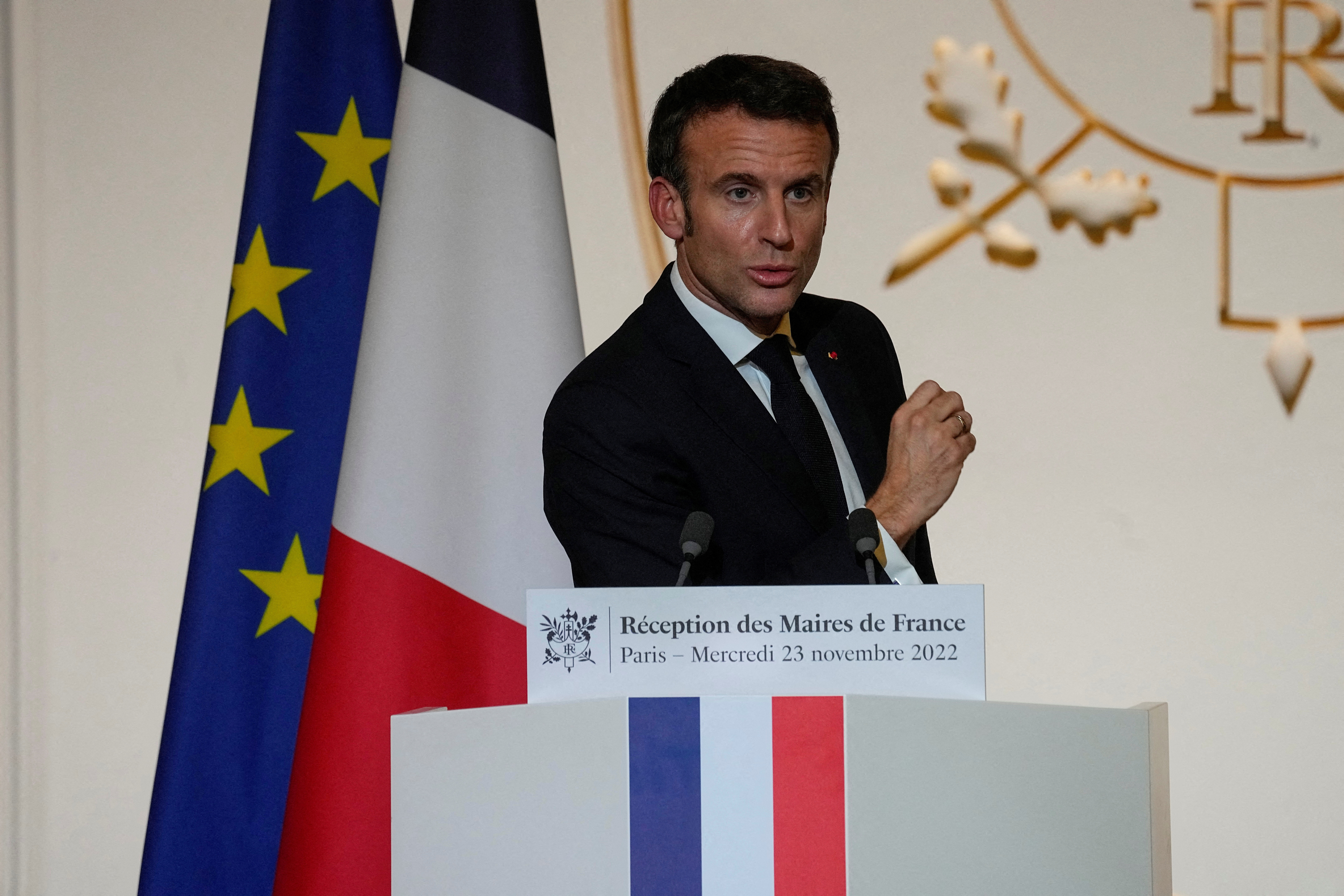 French President Emmanuel Macron delivers a speech as he hosts a reception for the mayors of France, at the Elysee Palace, in Paris, France, November 23, 2022. Michel Euler/Pool via REUTERS/File Photo 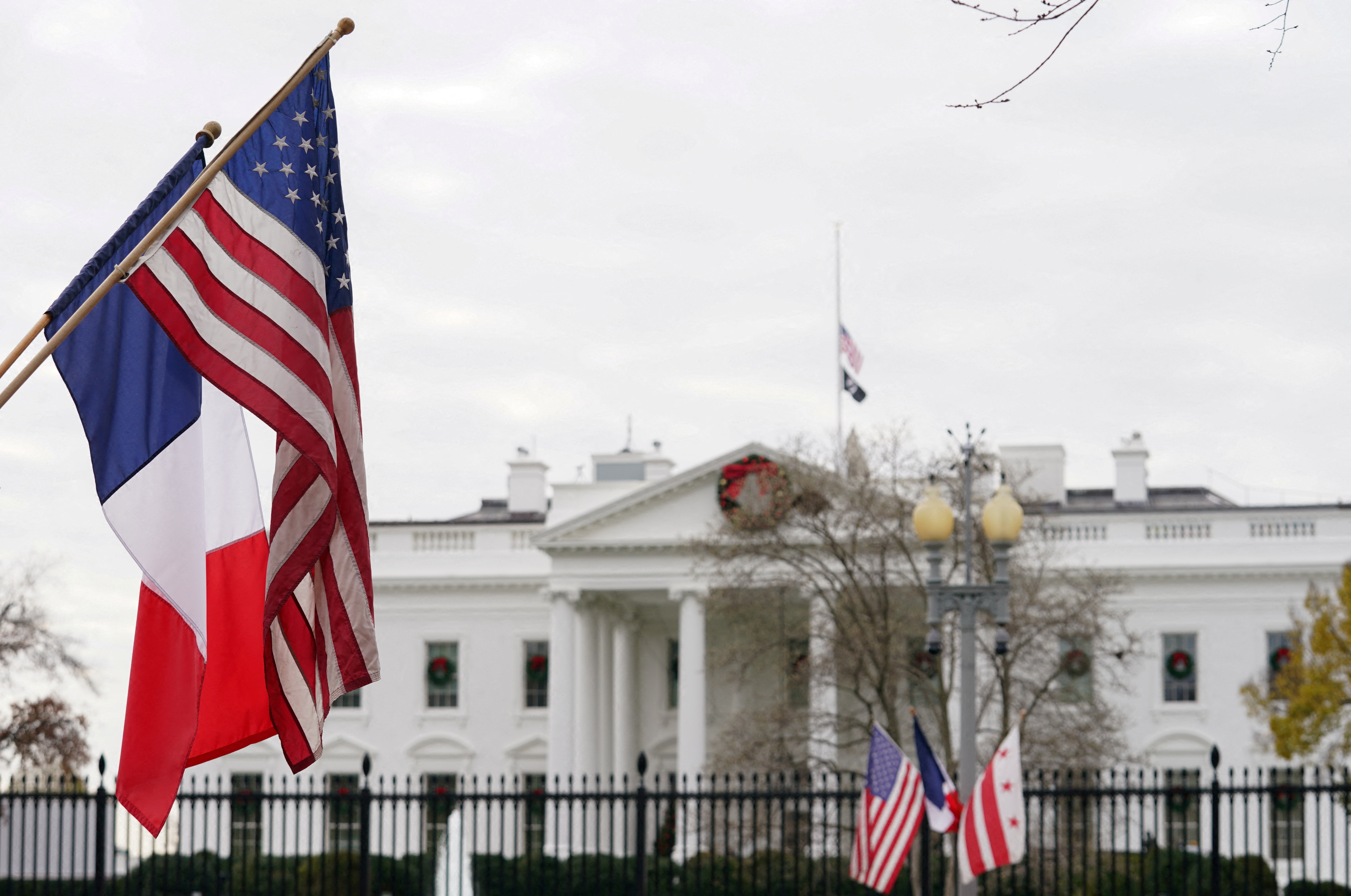 A French flag flies alongside the U.S. flag in front of the White House in preparation for this week?s state visit by French President Emmanuel Macron, in Washington, U.S., November 29, 2022. REUTERS/Kevin Lamarque/File Photo
获取更多RSS：
https://feedx.net
https://feedx.fun