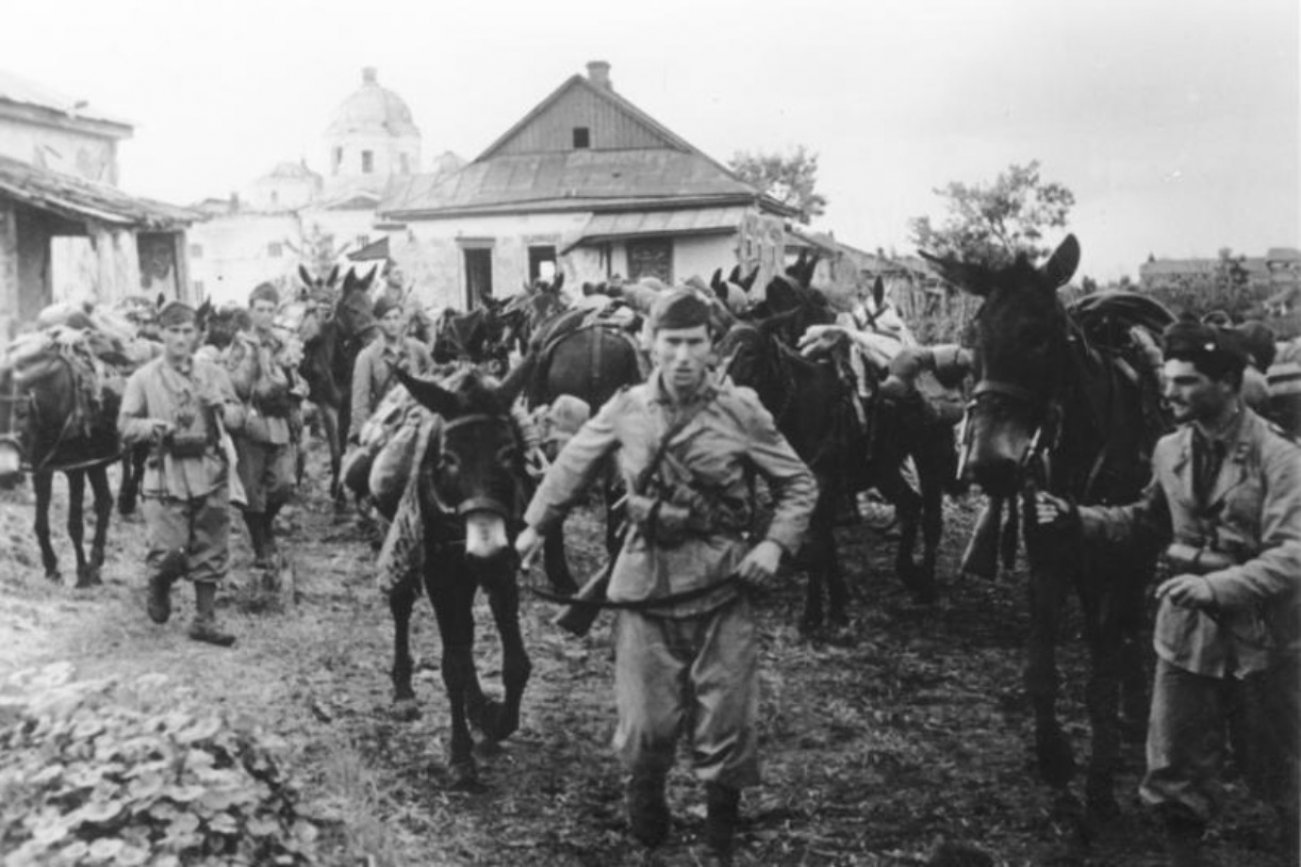 Why in God’s name were Italian peasants freezing to death outside Stalingrad?

Here’s What You Need To Remember: A few survivors couldn’t change the fact that the Italian army in Russia was destroyed. And with the western Allies capturing North Africa, and soon to invade Sicily and Italy, Mussolini’s tottering regime was in no position to send another army eastwards.

Mamma mia! Why in God’s name were Italian peasants freezing to death outside Stalingrad?

They should have been home eating pasta in Palermo, or veal in Venice, during that bitter winter of 1942–43. Instead, they were being trampled into the snow by waves of Soviet tanks that had materialized like demons from the freezing fogs of the vast Russian steppe.

Some Italian soldiers fought, and others fled. Many were killed, and those that weren’t disappeared into the Soviet gulag prison camps. Nearly half of the Italians who fought in Russia never made it home.

But what were they doing in Russia in the first place?

Blame the megalomania of two dictators. The first is Adolf Hitler, who conceived and ordered Operation Barbarossa, the fateful invasion of the Soviet Union in June 1941. The second was Benito Mussolini, the clown prince of despots, who sent 115,000 Italians to die in a conflict where they didn’t belong.

Mussolini had become the first Fascist dictator in 1922, when Hitler was just the obscure leader of a minor extremist party. How humiliated he was that Italy should end up as the bumbling little brother in the Axis family. Even more humiliating was that Germany never told Italy that it was planning to invade Russia (perhaps because the Germans were convinced that anything they told the Italians would soon be leaked to the British). When Mussolini learned of Hitler’s plans, he insisted as a matter of Fascist solidarity that the Italians participate. Besides, if the Soviet Union were to be conquered, might there not be some spoils for resource-poor Italy, whose economy desperately needed Russian oil, coal and other raw materials denied it by the British naval blockade?

No thank you, replied the Germans, who had a more realistic view than Mussolini of what his Fascist legions were capable of. In the summer of 1940, Italy had not entered the war until France had almost surrendered, and still the Italians were roughly handled by French troops (Italy’s vulture-like behavior led Roosevelt to proclaim that “the hand that held the dagger has struck it into the back of its neighbor”). Next, Italy had invaded little Greece, only to be so badly beaten by the Greeks that Hitler reluctantly had to send his armies on a Balkan campaign he would rather have avoided. Also in 1940, the huge Italian army in Libya launched a halfhearted invasion of Egypt, only to be routed by a small British force that almost ejected them from Africa. Again, the Germans came to the rescue, this time by dispatching Rommel and his Afrika Korps.

Is it any wonder that Hitler and his generals felt the Italians in Russia would be more trouble than they were worth? Better that Mussolini keep his forces in the Mediterranean, tying down the British while Germany fought the real war in the east.

But Il Duce eventually got his way. First to be dispatched in July 1941 was the Corpo di Spedizione Italiano in Russia (Italian Expeditionary Corps in Russia), or CSIR, consisting of sixty thousand men in three divisions, plus a small contingent of about a hundred aircraft. In July 1942, the CSIR was expanded into the Armata Italiana in Russia (Italian Army in Russia), or ARMIR. At peak strength, ARMIR, now the Italian Eighth Army, comprised 235,000 men in twelve divisions.

This was not a token contingent dispatched in the name of coalition solidarity. A quarter-million men was more than Mussolini committed to North Africa, a battleground on Italy’s doorstep.

The problem was that the Italian military was not well prepared for the Eastern Front, or any front for that matter. The soldiers were peasants, barely literate, with poor training, poor tactics and an officer corps more concerned with its own creature comforts than the welfare of its men. A large chunk of the Italian contingent was elite Alpini mountain troops, a formidable force in the mountains, but ill-suited for facing tanks on the open steppe.

Weapons such as modern artillery and heavy anti-tank guns were in short supply, and there were so few trucks that Italian infantry in North Africa actually had to walk the thousand miles from Libya to Egypt on foot. The ARMIR had just a handful of tanks, and these were the laughable Italian models such as the seven-ton Fiat L6/40 light tank, soon to be pitted against twenty-nine-ton Soviet T-34 tanks that even the Germans could barely stop in 1941.

Even against the British, who themselves were amateurs at warfare compared to the Germans, the Italians couldn’t win without German help. Now they were to take on the huge, ruthless Red Army, which bristled with modern tanks and artillery, and which didn’t care how many casualties it took as long it destroyed the enemy.

At first, Russia was a walk in the sun for the Italian soldiers. They performed well in southern Russia in the summer of 1941, though they were only advancing against disorganized and retreating Soviet armies. Even when the Red Army counterattacked in the winter of 1941–42, the Italians held—but only with German support. The soldiers of the German “master race” didn’t think much of the emotional Italians, a feeling reciprocated by Italian soldiers, some of whom would rather have been fighting the Germans than being their allies. On the other hand, the Italians got along much better than the Germans did with Russian civilians, including the women.

When Germany launched Operation Blue, its summer 1942 offensive in southern Russia, the Italians advanced along with them. Their armies weakened from the brutal weather and Soviet counterattacks the previous winter, the Germans needed all the manpower they could get. Advancing seven hundred miles to Stalingrad in the east and the Caucasus in the south, the German couldn’t muster enough troops to guard their vastly expanded front lines while still concentrating enough forces to maintain their offensive.

The need to feed division after division into the meat-grinder of Stalingrad, while supporting a separate offensive south into the Caucasus, resulted in the Axis forces guarding the flanks and rear being thinly spread. Among them were the Italian Eighth Army to the northeast of Stalingrad, defending a long front almost two hundred miles long, with almost no German reserves to support it.

Stavka, the Soviet high command, realized that the weak points of the German bulge into southern Russia were those defended by the Axis allies.

Operation Uranus, the first phase of the Soviet counteroffensive, opened in November 1942 with a blitzkrieg that steamrollered the Romanian armies guarding the German flank, and went on to encircle the German Sixth Army at Stalingrad. The onslaught missed the Italians—at first. Then in December 1942 came Operation Little Saturn, which targeted the Italians, Romanians and Hungarians. Two Italians divisions were slammed by fifteen Soviet divisions and a hundred tanks, while the few German reserves were too busy to support the Italians. Meanwhile, other Soviet forces attacked the Romanian and Hungarian troops on the Italian flanks, and soon the Eighth Army was encircled.

The Germans blamed the Italians for cowardice. “At Kantemirovka, the mere sight of attacking tanks drove thousands of Italians into headlong flight, which only confirmed German biases, as well as the fact that the Italians usually discarded their weapons so as not to be sent back to the front immediately,” writes historian Rolf Dieter-Muller. “Even within the ARMIR, many officers felt ashamed and embittered by this state of affairs.”

On the other hand, the Italians were convinced that the German abandoned them to save their own precious Aryan skins. In fact, the Italians fought on for almost two weeks, despite inferior numbers and inferior weapons. Some troops, led by the redoubtable Alpini, managed to break out of the encirclement in the desperate battle of Nikolayevka.

But a few survivors couldn’t change the fact that the Italian army in Russia was destroyed. And with the western Allies capturing North Africa, and soon to invade Sicily and Italy, Mussolini’s tottering regime was in no position to send another army eastwards.

The Eighth Army returned home to Italy in March 1943, six months before Italy surrendered to the Allies. By September, Italy would be at war with Germany.

Michael Peck is a frequent contributor to the National Interest and is a regular writer for many outlets like WarIsBoring. He can be found on Twitter and Facebook.

The War On History Has Come for George Washington

Meet America’s Best and Worst Presidents Ever Ever