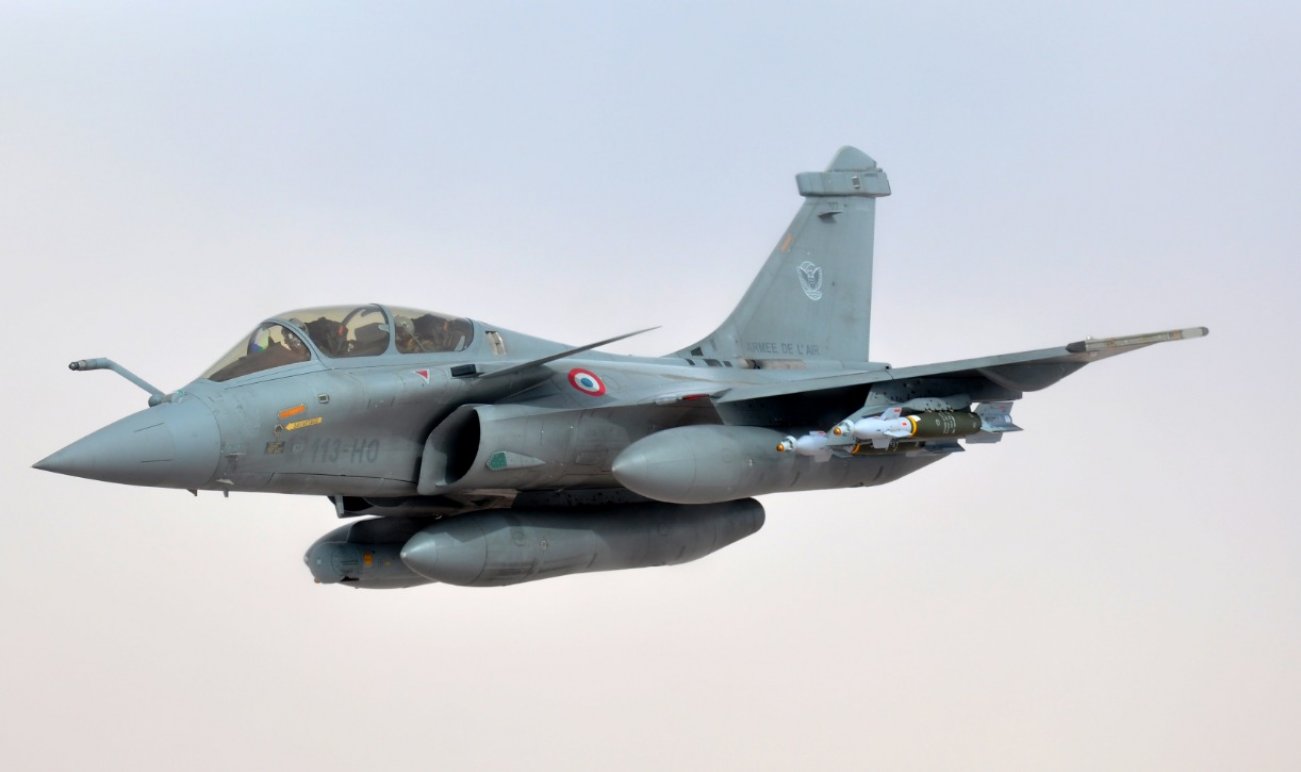 Here’s What You Need To Remember: As France must wait nearly two decades before a European stealth fighter can enter service, its armed forces are betting that in the interim adding networked sensors and weapons to the Rafale’s superior kinematic performance and powerful electronic warfare systems will keep the agile jet relevant in an era of proliferating stealth aircraft and long-range surface-to-air missiles.

In January 2019, French Defense Minister Florence Parly announced France would commit $2.3 billion to develop an F4 generation of the Dassault Rafale twin-engine multirole fighter.  This would include production in 2022–2024 of the last twenty-eight of the original order of 180 Rafales, followed by the purchase of an additional thirty Rafales F4.2s between 2027–2030, for a total of 210.  Since 2008, France has deployed land- and carrier-based Rafales into combat in Afghanistan, Iraq, Libya, Mali and Syria.

Despite incorporating stealth technology, the Rafale (“Burst of Fire” or “Gust of Wind”), is not a true stealth aircraft like the F-35. True, the French jet’s wings and fuselage are primarily composed of radar-absorbent composite materials and lightweight titanium.  Other stealthy design features include S-shaped engine inlets, serrated edges and a channel exhaust cooling scheme designed to reduce infrared signature.

These give the Rafale an estimated Radar Cross Section (RCS) of slightly above one square meters—comparable to peers like the Super Hornet and Typhoon, but orders of magnitude greater than that of the F-35 jet.  Land-based Rafales are currently priced $76–$82 million per plane, only modestly cheaper than the F-35A which benefits from vastly greater economy of scale, though the Rafale’s operating costs are likely lower.

Paris particularly prizes maintaining an independent domestic arms industry and has never seriously considered purchasing F-35s.  Instead, France is working with Germany and other partners to develop a sixth-generation Future Combat Air System stealth jet to enter service in 2035-2040.  Until then, France is doubling down on the 4.5-generation Rafale by integrating additional F-35-style avionics and improving its network-centric warfare capabilities.

The Rafale is much more agile than the F-35, with superior climb rate, sustained turn performance, and ability to super-cruise (maintain supersonic flight without using fuel-gulping afterburners) at Mach 1.4 while carrying weapons.  The Rafale’s all-moving canards—a second set of small wings near the nose—give the Rafale excellent lift and low-altitude speed and performance, as you can see in this majestic airshow display.

The Rafale’s agility won’t help as much if it is engaged at long distances by enemy surface-to-air missiles and stealth jets.  To compensate, the Rafale boasts an advanced Spectra electronic warfare system that supposedly can reduce the Rafale’s cross-section several times over—it is rumored by reflecting back signals using ‘active canceling.’  Spectra also incorporates powerful jammers and flare and chaff dispensers, provides 360-degree early-warning, and can even assist Rafale pilots in targeting weapons to retaliate against attackers.

Spectra’s capabilities reportedly allowed Rafales to deploy on raids over Libyan airspace in 2011 before air defense missiles had been knocked out.

Other key capabilities include sensor fusion of the Rafale’s RBE-2AA Active Electronically Scanned Array multi-mode radar, which can track numerous targets over 124 miles away, with its discrete OSF infrared-search and track system, which has an unusually long range of sixty-two miles.  Rafale pilots also benefit from uncluttered instrumentation combining voice command with flat-panel touch screens.

The multirole jet carries a punchy thirty-millimeter revolver cannon and up to twenty-one thousand pounds of weapons on fourteen hardpoints, making it a versatile air-to-ground platform.  Because Paris requires expeditionary capability in Africa, the Rafale can refuel in flight and carry up to five fuel tanks for very long transits, and can be operated from relatively unprepared airfields, unlike most high-performance jets.

What’s new in the Rafale F4?

Dassault produces three basic types of Rafales: the single-seat Rafale-C, the two-seat Rafale-B (the additional weapon systems officer being preferred for strike and reconnaissance missions) and the carrier-based single-seat Rafale-M, which has an arrestor hook, reinforced landing gear and buddy-refueling pod capability. Each type has evolved in common generations designated F1, F2, F3 and F3R.

The F4 generation introduces additional network-centric warfare capabilities and data-logistics similar to those on the F-35 Lightning, enabling Rafales on patrol to build a more accurate picture of the battlespace by pooling their sensors over a secure network, and even exchange data using new satellite communications antenna.  The pilots also benefit from improved helmet-mounted displays.

Other systems to be tweaked include the air-to-ground mode of the RBE-2AA radar, the M88 turbofan’s digital computers, and a new AI-system for its reconnaissance and targeting pod allowing it to rapidly analyze and present information to the pilot.  Rafale-Ms will also receive a new automated carrier landing system.

New weapons set for integration most notably an improved model of the Mica short-to-medium range air-to-air missile, which has a range of forty-nine miles.  The Mica can be launched without initially being locked and guided remotely by a data link on the fighter before engaging either an infrared or AESA radar seeker to close in for the kill, using a vector-thrust motor to pull off tight maneuvers.  Because both the Rafale and the Mica missile can employ passive infrared targeting without using an indiscrete active-radar for guidance, the MICA can be launched with little warning for the target.

The Mica-NG model will incorporate new infrared-matrix sensors for better performance versus stealth fighters, carry additional propellant for longer range, and integrate internal sensors to reduce maintenance costs.  Its dual pulse motor will allow it to accelerate just prior to detonation for a greater probability of achieving a kill.

Another weapon set for integration is heavier 2,200-pound variants of the AASM HAMMER, a guidance kit similar to the U.S. JDAM.  Previously, the Rafale could only carry 485-pound variants of the weapon which can use either GPS-, laser- or -infrared guidance to deliver precise strikes.  Unlike the JDAM, the HAMMER also incorporates a rocket-motor, allowing it to hit targets up to thirty-seven miles away when released at high altitude.

The Rafale will also be modified to integrate future upgrades of the French SCALP-EG stealthy subsonic cruise missile and the supersonic ASMP-A cruise missile which carries a 300-kiloton-yield nuclear warhead.  Reportedly France may develop a hypersonic AS4NG variant increasing range from 300 miles to over 660 miles.

Currently, the French Armée de l’Aire has three Rafale multi-role squadrons and two nuclear-strike squadrons based in Mont-de-Marsan (south-western France), Saint-Dizier (north-eastern France) and al-Dhafra in the UAE.  There are also an operational conversion unit and a testing and evaluation squadron.

The French Navy has three Rafale-M squadrons which rotate onboard France’s nuclear-powered carrier Charles de Gaulle.  In 2018, a squadron of Rafale-Ms proved their capability to operate from the U.S. carrier George H. W. Bush.

The forthcoming Rafale F4s will progressively replace France’s fourth-generation Mirage 2000s, over 110 of which remain in service today.  French periodical Le Figaro claims that older Rafales will also eventually be updated to the F4 standard.

Abroad, Dassault is finish delivery of orders from Egypt (twenty-four), Qatar (thirty-six) and India (thirty-six).  All three countries may order additional Rafales, though the price of its initial Rafale order has caused a political scandal in New Delhi.

As France must wait nearly two decades before a European stealth fighter can enter service, its armed forces are betting that in the interim adding networked sensors and weapons to the Rafale’s superior kinematic performance and powerful electronic warfare systems will keep the agile jet relevant in an era of proliferating stealth aircraft and long-range surface-to-air missiles.

Sébastien Roblin holds a master’s degree in conflict resolution from Georgetown University and served as a university instructor for the Peace Corps in China. He has also worked in education, editing, and refugee resettlement in France and the United States. He currently writes on security and military history for War Is Boring. This first appeared early in June 2018.