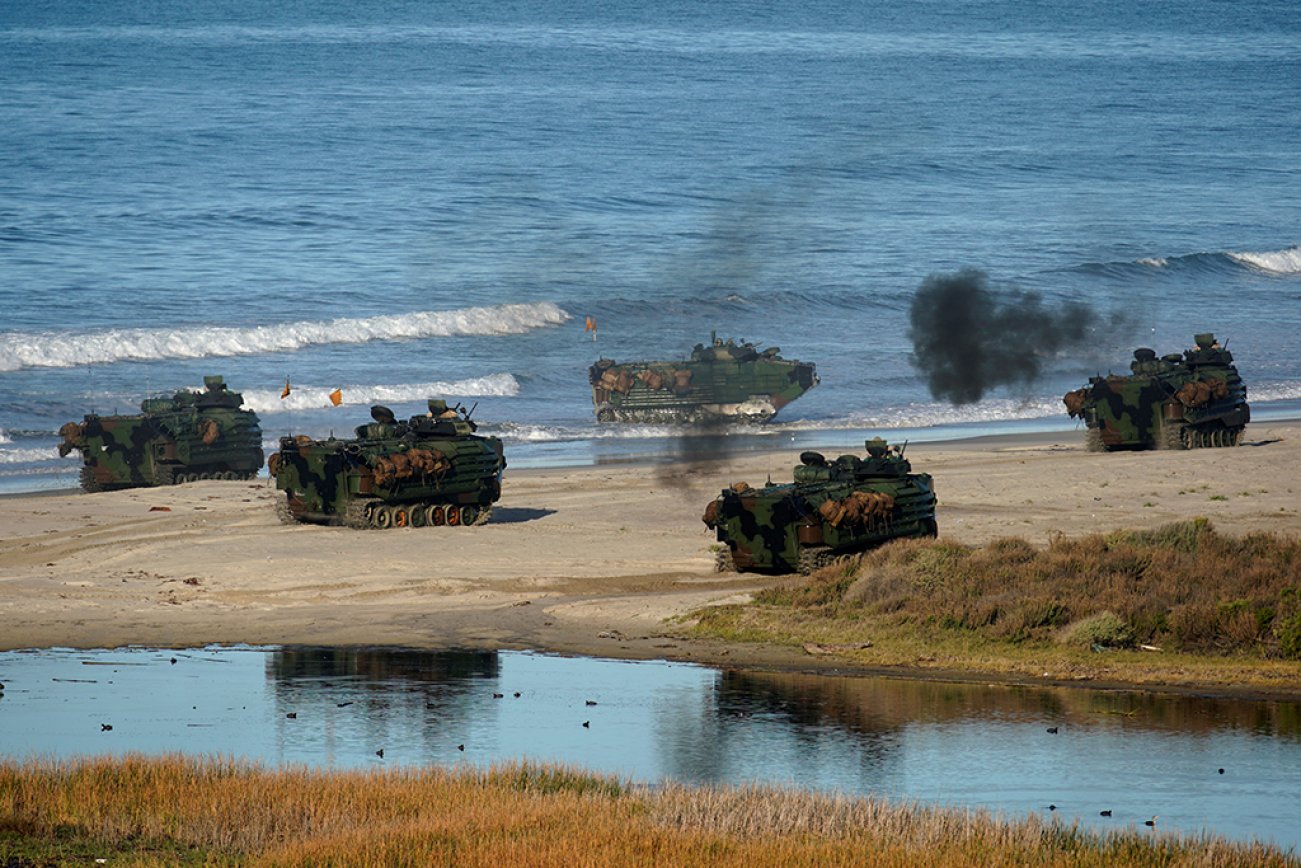 it is a useful option in the event Iran escalates and a major military operation is considered.

Here’s What You Need to Know: Land wars are generally difficult affairs. Modern technology makes attacks from the sea even harder.

One of the greatest truisms of life is that land wars in Asia are futile. The continent’s vastness allows defenders to trade space for time, extending the logistical lifelines of invaders to the breaking point. This argument holds for Iran, which at a population of one quarter that of the United States and the size of the West Coast is too large for even the largest of modern armies to occupy. But what about an amphibious raid against select targets on Iran’s coastline? Military action against the Islamic Republic is by no means imminent or even on the horizon, but it’s important for the public to understand the tools the Pentagon—and the White House—believe they have in their toolboxes. As The National Interest noted last week, Iran has a sprawling coastline. At 1,550 miles, Iran’s southern coastline is longer than that of California, Oregon and Washington combined. While such a long sea border is useful for projecting power into the narrow Persian Gulf, it is also a double-edged sword. The downside is that Iran has 1,550 miles of coastline it must defend from a highly capable amphibious force such as the U.S. Marine Corps.

The Marine Corps trains for a broad spectrum of operations, from pilot and aircraft personnel recovery to full-scale amphibious and airmobile assaults. One type of operation the service specializes in is the amphibious raid: using a small landing force to capture an objective, occupy it for a short period for a specific purpose, and then evacuate back to the sea.

If tensions with Iran continue to heat up, one option would be to stage an amphibious raid against a land or sea-based Iranian military facility. Iran has a large number of military facilities along its coastline belonging both to the Iranian Navy and the naval arm of the Revolutionary Guards. The Navy typically operates east of the Strait of Hormuz, while the Revolutionary Guards operate west of the Strait and generally across the Persian Gulf. The Iranian Navy operates larger, more capable ships, while the Revolutionary Guards Naval Forces tend to operate smaller watercraft, along the lines of civilian speed boats armed with heavy infantry weapons.

An amphibious raid would be targeted against an island, oil platform or coastal facility with a military purpose. Ideally, the target would be one directly responsible for some provocation, such as the laying of sea mines, capturing Western naval personnel, or staging small boat attacks. The Revolutionary Guards have historically been more willing to instigate incidents with Western navies at sea, making a Guards base a more likely target. The United States could also choose to deliberately target the more belligerent Revolutionary Guards over the more reserved Iranian Navy, in order to humiliate them and weaken them politically.

A raid would involve the deployment of an Amphibious Ready Group of amphibious assault ships and their destroyer escorts backed by at least one carrier strike group. Each ARG travels with a Marine Corps infantry battalion and the air and amphibious assets to get them ashore, plus attached armor, artillery, communications, medical, and supply. Overall, the raiding force could well consist of over 16,000 American Marines and sailors.

The operation would kick off with the neutralization of local enemy air defenses. Tomahawk cruise missiles would destroy fixed air defenses and command and control centers that might organize a counterattack, while the five-inch guns of the destroyers sailing with the ARG could strike the objective itself. Lately, the Marines have been experimenting with launching Guided Multiple Launch System (GMLS, or Gimler) rockets from the flight decks of amphibious ships, essentially giving the Corps an organic shipboard precision guided weapon. U.S. Navy F/A-18E/F Super Hornet, F-35C, and Marine Corps F-35B fighters could also strike targets at a distance, using the new Stormbreaker all-weather glide bomb.

Once the objective is softened up by missile, artillery and air strikes it is time to launch the raid itself. A Marine Expeditionary Unit can assault a target by air with the MV-22 Osprey and CH-53E Sea Stallion, with AH-1Z attack helicopters in support. By sea, Marines would land by amphibious assault vehicle, LCAC hovercraft, and LCU landing craft, bringing with them artillery, armored vehicles, and in some cases a small number of Abrams tanks. Over the course of several hours a MEU could put a thousand Marines on the objective. After a predetermined amount of time, the raiding force would withdraw to the ships of the ARG.

An amphibious raid would be a very dangerous operation, with Marines exposed to air defense weapons, anti-ship weapons, artillery, and infantry close combat. Casualties, whether by enemy fire or the fog of war, would be a certainty. Landing on and seizing, if only temporarily, Iranian territory would be highly escalatory by nature. There is nothing Iran has done at this point, or in the last thirty years, that would warrant such an operation.

That having been said, it is a useful option in the event Iran escalates and a major military operation is considered. As belligerent and posturing as Iran is, its armed forces are under-equipped and would find themselves stretched thin if seriously challenged from the sea. Even the threat of an amphibious raid could force the Iranians to rush to defend their extremely long coastline, an expensive and time-consuming proposition that would preoccupy Iran from making mischief elsewhere. In the end, the mere threat of an amphibious raid may do the United States more good, deterring Iran from an action that would warrant such a complex operation, than a raid itself.

Kyle Mizokami is a writer based in San Francisco who has appeared in The Diplomat, Foreign Policy, War is Boring and The Daily Beast. In 2009 he co-founded the defense and security blog Japan Security Watch.

This article first appeared in July 2019.