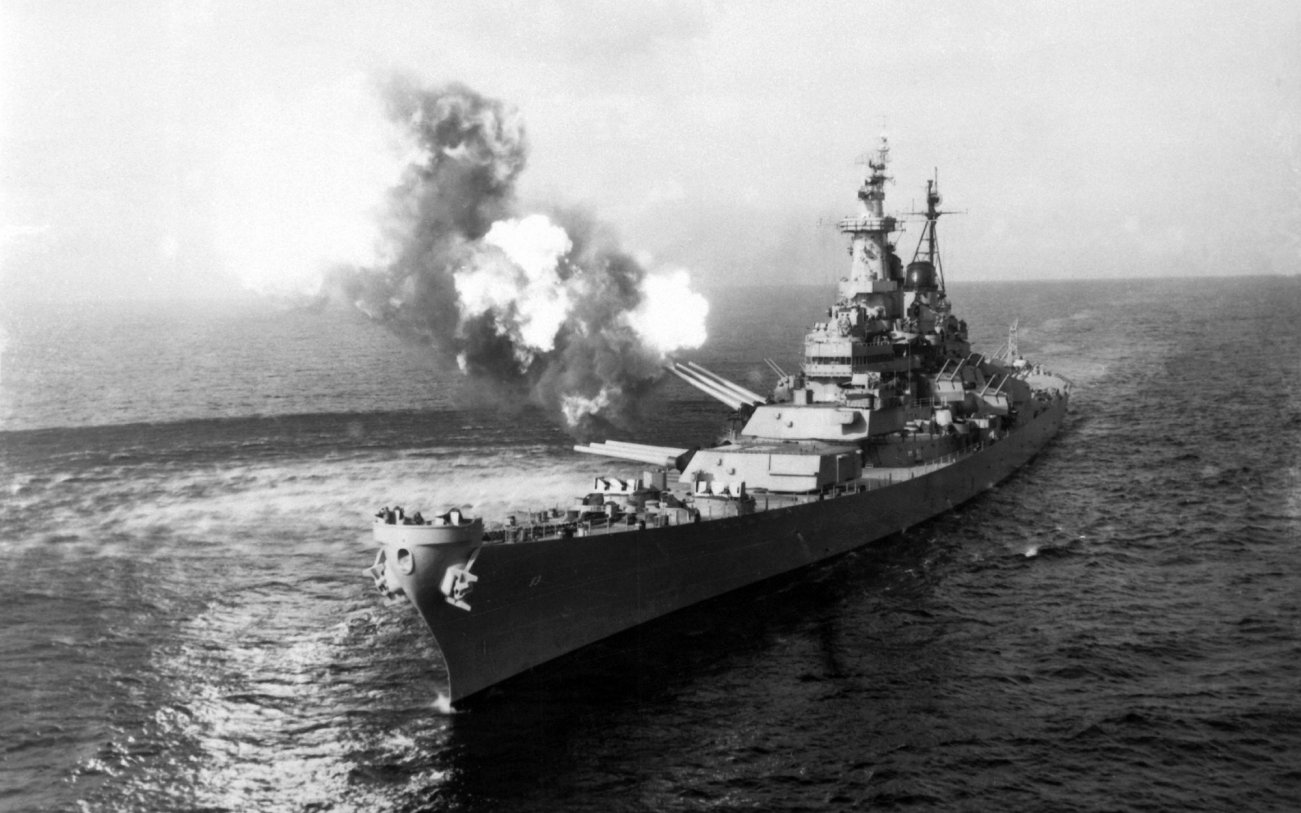 The famed warship served from World War II to the Gulf War.

Key Point: All of the late American battleship designs combined a grim practicality with a streamlined aesthetic.

The North Carolina– and South Dakota–class battleships were designed with the limits of the Washington Naval Treaty in mind. Although much more could be accomplished in 1938 with thirty-five thousand tons than in 1921, sacrifices still had to be made. As had been practice in the first round of battleship construction, U.S. Navy architects accepted a low speed in return for heavy armor and armament. Consequently, both the South Dakotas and the North Carolinas had speeds a knot or two slower than most foreign contemporaries. The Montanas, the final battleship design authorized by the Navy, would also have had a twenty-eight-knot maximum speed. In any case, Japan’s failure to ratify the 1936 London Naval Treaty bumped the maximum standard tonnage from thirty-five to forty-five thousand, giving the designers some extra space to work with. The result was the Iowa class, the most powerful and best-designed battleships ever built.​

USS Missouri, the third laid down but last completed of the Iowa class, carried a slightly heavier main armament than the South Dakotas and could make five extra knots. The Iowas were the first U.S. Navy battleships to make speed a primary value, and achieved the speed through a longer hull and more powerful machinery. Indeed, the Iowas are the fastest battleships ever built, outpacing even the Italian Littorios by a knot or two. While no Iowa ever recorded a speed higher than thirty-one knots, rumors over the years suggested that the battleships might be able to make thirty-five knots over short distances. Part of the rationale for building the Iowas was to have ships capable of chasing down and destroying the Japanese Kongo-class battlecruisers, themselves built in 1913, but the Navy also wanted to ensure that it had battleships capable of keeping up with the Essex-class carriers.

Missouri’s guns were also a step up from previous classes. The sixteen-inch/fifty-caliber could fire a heavier shell, at a longer range and with more penetrating power than the guns carried by the South Dakota class. Indeed, while the 18.1-inch guns of HIJMS Yamato launched a heavier shell, the sixteenth-inch/fifty-calibers had more penetrating power and could fire at a slightly faster rate. On the downside, Missouri’s great length and narrow beam (necessary for transit through the Panama Canal) made it a mediocre seaboat in heavy oceans.

USS Missouri entered service in June 1944 and joined Vice Admiral Marc Mitscher’s Task Force 58 (fast carrier task force) in January 1945. Missouri’s primary mission was aircraft-carrier escort, although it participated in the bombardment of Okinawa in 1945. On April 11, it suffered superficial damage from a kamikaze strike.

Adm. William “Bull” Halsey took Missouri as flagship of the Third Fleet in May. As U.S. carriers destroyed what remained of Japanese airpower and seapower in spring 1945, Missouri bombarded Honshu and Kyushu directly. On August 29, 1945, Missouri entered Tokyo Bay and prepared to accept the Japanese surrender. On September 2, Japanese envoys boarded Missouri and signed instruments of surrender with representatives from most of the Allied combatants in the Pacific.

After the surrender ceremony, Missouri participated in Operation Magic Carpet and some occupation-related activities, then retired the United States and training duties. In part because of the affection that President Harry S. Truman had for the ship (he hailed from Missouri, and his daughter christened the battleship), Missouri remained more active than its sisters in the immediate postwar period. This included a major show-the-flag cruise in the Mediterranean, reaffirming the U.S. commitment to the security of Greece and Turkey. Active at the beginning of the Korean War, it carried out shore bombardment missions along the Korean peninsula for the better part of three years. After the war, Missouri again served as a training ship before entering reserve in 1955.

Various proposals were floated for reactivating the Iowas over the next twenty-five years. New Jersey returned to service in 1968 to bombard North Vietnam, but was soon sent back to mothballs. Some proposals in the late 1970s envisioned the replacement of the aft turret with a flight deck capable of operating helicopters and V/STOL aircraft, but these were rejected because of high cost. At the beginning of the Reagan administration, however, funds began to flow more freely, and plans were hatched to reactivate the four remaining battleships. That the Soviets were putting into service the Kirov-class battlecruisers, the largest surface combatants in the world, helped the battleship advocates make their case.

Missouri returned to service in May 1986, less eight five-inch/thirty-eight-caliber guns, but with mounts for Harpoon and Tomahawk cruise missiles, as well as Phalanx point-defense guns and Stinger short-range surface-to-air missiles. In addition to the helipad (installed in the 1950s), Missouri was given the capability to launch and recover unmanned drones.

In 1990, Missouri deployed as part of Operation Desert Shield, and in January it contributed to the air offensive against Iraq with several salvos of Tomahawk missiles. When the ground invasion began, Missouri and its sister Wisconsin began bombarding Iraqi positions with sixteen-inch and five-inch guns. Missouri narrowly avoided an Iraqi antiship missile when the accompanying HMS Gloucester shot the missile down.

With the Cold War over, Missouri decommissioned in March 1992. The cost of maintaining the battleships in service, which required large crews and specialized training, was simply too much for the Navy to bear. It was struck from the Navy List in 1995 in anticipation for conversion into a museum ship. Its sisters Wisconsin and Iowa remained on the Navy List until early 2006. The viability of returning the ships to service was debated for much of the 1990s and early 2000s. The Marine Corps argued that the battleships were necessary for the provision of amphibious gunfire support, a concern that the promise of the Zumwalt-class destroyers would only partially allay.

In 1999 USS Missouri opened as a museum ship at Pearl Harbor, not far from the wreck of USS Arizona. It has subsequently appeared in a pair of terrible movies; the 2001 Michael Bay effort Pearl Harbor, in which it fills in for USS West Virginia, and the 2012 film Battleship, in which it fights aliens. Missouri was also the setting for 1992’s Under Siege which was altogether better than either of the other two films.

All of the late American battleship designs combined a grim practicality with a streamlined aesthetic. Because of their length and narrow lines, the Iowas were the pinnacle of the effort. They are truly beautiful ships, and it is fortunate that all four are now on display. Wisconsin resides in Norfolk, New Jersey in Camden and Iowa in Los Angeles.

Robert Farley, a frequent contributor to TNI, is a Visiting Professor at the United States Army War College. The views expressed are those of the author and do not necessarily reflect the official policy or position of the Department of the Army, Department of Defense, or the U.S. Government.

This article appeared in 2019 and is reprinted due to reader interest.