There has been a surge of global interest in Taiwan’s security in recent years. Amidst the noise, it can be easy to lose sight of broader trends that are shaping the environment within which Taiwan operates. Taking a broader view can bring into focus what tasks are most important for Taiwan to protect its democratic way of life.

At the global level, several trends are unfolding in parallel. First, great power competition is intensifying. Russia is employing violence to seek to redraw boundaries. China is advancing its ambitions by operating below the threshold of conflict. China-Russia relations are unnaturally close by historical standards. Moscow’s and Beijing’s revisionist undertakings are attracting coordinated pushback from developed countries. Iran and North Korea also are contributing to rising geopolitical tensions.

At the same time, transnational challenges are intensifying. The effects of climate change and global pandemics are roiling societies on every continent. The global economy appears headed toward recession. Emerging markets are facing rising debt distress. Russia’s use of food and fuel as strategic weapons is generating insecurities, particularly among the world’s most vulnerable populations. And geostrategic competition is hindering coordination to deliver solutions.

European powers are dealing with the largest land war on their continent since World War II. They are working to limit destruction of war in Ukraine even as they cope with the costs of the conflict for their own people.

Many Asian countries are searching for a strategically stable position between the United States and China. None wish to see China dominate the region and limit their freedom of maneuver. At the same time, none see profit in joining any type of anti-China containment coalition. Many Asian countries are relieved that the United States has returned to an active leadership role. At the same time, they are disenchanted by the meagerness of America’s economic agenda and unsure whether Washington will continue to lean forward in Asia after its next presidential election in 2024.

Over the past two years, the United States has re-invested in alliances and in domestic initiatives to spur innovation. Over the next two years, America’s politics will become more charged; divided government and a presidential election could deepen partisan divisions. There is no appetite among the American electorate for bold projects to solve global problems. The public mood is more focused on addressing challenges at home.

In other words, there is not ready enthusiasm in the United States or elsewhere for a military showdown with China over Taiwan. China also has its own reasons not to want to force a military test of wills in the Taiwan Strait. China’s leaders face mounting challenges, from zero-COVID lockdowns to high youth unemployment, a sagging property sector, mounting debt, worsening demographics, and a less permissive external environment for China’s rise.

Against this backdrop, it is unsurprising that President Xi largely repeated boilerplate Chinese language on Taiwan in his work report to the 20th Party Congress. His reported instruction to the People’s Liberation Army to be prepared for military operations in the Taiwan Strait by 2027 is an acknowledgement that they are not yet prepared now. Xi also left President Biden with an impression that conflict is not imminent when both leaders met on the margins of the G-20.

This is not to suggest that China’s appetite for absorbing Taiwan has diminished. To be sure, China will work to tilt cross-Strait dynamics in its preferred direction. Beijing will continue to invest aggressively in its nuclear arsenal as well as its conventional military capabilities. They will study Russia’s mistakes in Ukraine for lessons on vulnerabilities that they must remedy in their own force. They will seek to disrupt European Union unity on Taiwan policy to limit European involvement in cross-Strait issues. They also will employ threats and incentives to try to keep other countries such as South Korea, the Philippines, and India on the sidelines. Beijing will seek to strengthen self-reliance in key sectors to future-proof against anticipable Western economic sanctions. And they will attempt to limit Taiwan’s economic and political links with the rest of the world as part of a strategy to increase Taiwan’s dependence upon China for future growth.

In other words, China is not standing still, even as it continues to operate below the threshold of military conflict. The key question, therefore, is whether Taiwan will use the coming years more effectively than China to strengthen its relative position.

With clarity of vision and unity of purpose, Taiwan can put itself in a stronger position to protect its democratic way of life. This will be a tough task, but also a worthy national project. 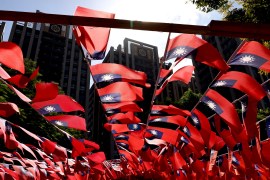