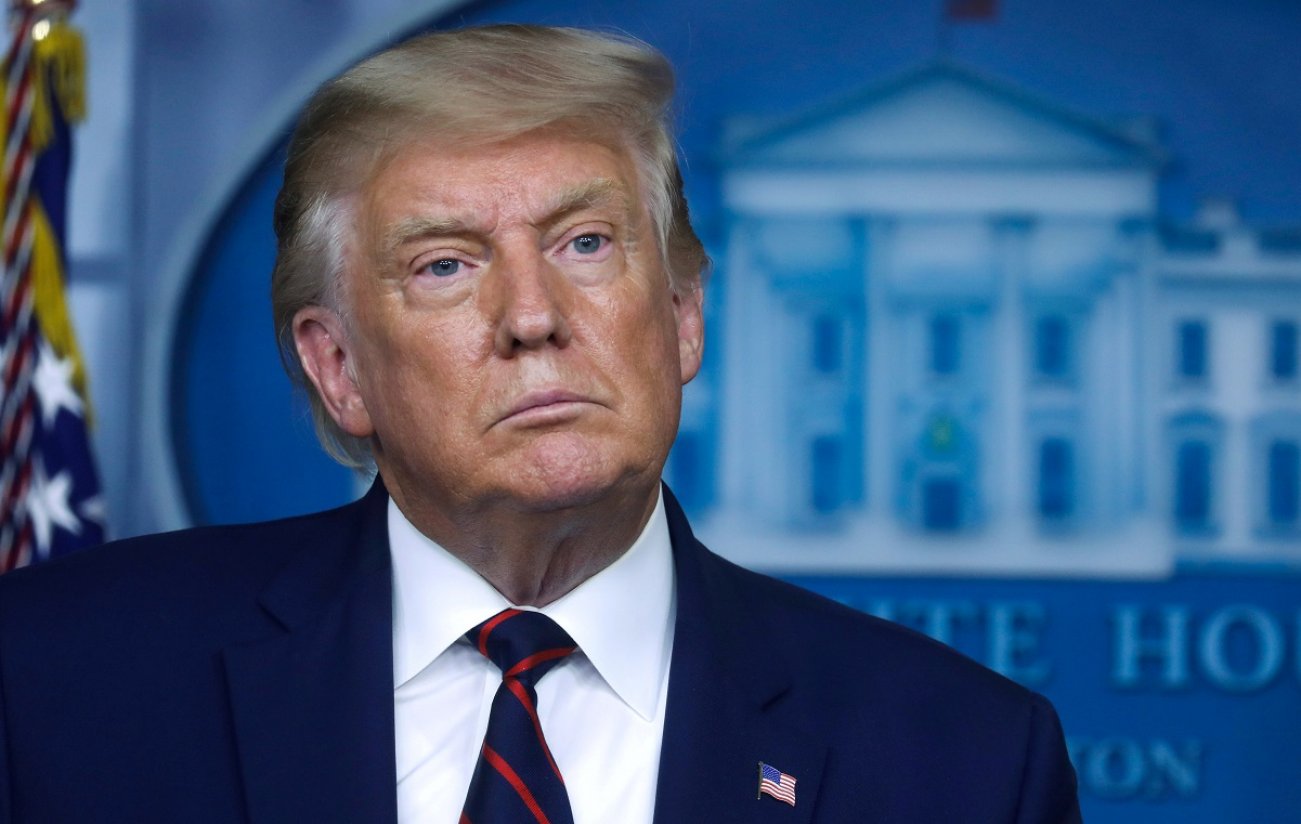 Trump should use the North’s current difficulties as an excuse to re-establish contact. He should send a note to Kim, to match those the North Korean leader used to write to Trump. The latter should indicate his concern over the difficulties faced by the people of the DPRK and suggest this would be a good moment to work together for their benefit.

The year 2020 is shaping up as annus horribilis for North Korea. Ravaged by seven decades of socialist mismanagement, the Democratic People’s Republic of Korea is under economic siege by America. In January Pyongyang shut out most foreign trade and contact to limit the spread of COVID-19. Subsequently, North Korea was battered by torrential rains and floods. And most recently was hit by multiple typhoons. Kim Jong-un’s vision of accelerated economic development was washed away along with much of his nation’s landscape.

The Korean Workers’ Party Central Committee recently announced that the “economy was not improved in the face of the sustaining severe internal and external situations and unexpected manifold challenges” over the last five years. The danger for Kim is that hardship will taint even Pyongyang’s elite, which could cause destabilizing unrest for a leader who has proved willing to imprison and kill to ensure his political survival. Unless China or Russia offer large-scale aid, the North could suffer a deadly economic crisis that reprises past natural disasters.

James Fretwell of NK News recently pointed back to the 1990s: “The DPRK faced similar circumstances prior to the Arduous March—estimates vary, but somewhere between 200,000 and 1.5 million people died as a result of the famine.” The cause was complex and multifaceted. Then socialist control of the economy was almost complete and thus enervating. The collapse of the Soviet Union cost Pyongyang foreign trade and assistance. North Korean agriculture suffered through a series of floods and droughts. Fretwell noted that “already the parallels are evident” and the DPRK “could soon be facing serious shortages in its domestic food supply.”

Gaining international aid will be more difficult than in the past. No doubt, Kim does not want to show weakness to the U.S. and South Korea. The North’s COVID-19 restrictions have driven out diplomats, aid workers, and humanitarian volunteers. Pyongyang previously said it would maintain its self-blockade until development of a coronavirus vaccine, which almost certainly means next year. Even if the DPRK changed policy and invited the return of international organizations, they would be reluctant to send personnel given uncertainty over the degree of infection in the North and the difficulty in arranging travel for anyone willing to go.

Should the situation materially worsen the People’s Republic of China, most likely, or Russia, or both might step in. They fear chaos in the North, which could spur desperate North Koreans to attempt to cross a border which has been largely locked down. Moreover, Beijing and Moscow might hope to undermine U.S. policy, both because doing so forces Washington to focus on the seemingly intractable North Korea problem and reduces the likelihood that a desperate DPRK would cut them out in making a denuclearization deal with the U.S.

The latter point should not be underestimated. The PRC has little love for Pyongyang, despite their wartime alliance and rhetorical brotherhood. China’s Xi Jinping refused to meet with Kim Jong-un for six years until early 2018, after the Kim-Trump summit was scheduled. Then Xi was worried about being bypassed and his interests ignored, forcing him to soften his stance toward the North. Even though the possibility of a Trump-Kim agreement has ebbed, Xi likely remains wary of the possibility, especially given Trump’s unpredictability.

Although fans of “maximum pressure,” which as yet has failed everywhere, hope the DPRK’s current travails will force surrender. Unfortunately, Pyongyang’s painful resistance seems likely to continue. The resulting situation is not good for Washington.

First, Kim’s increased desire for sanctions relief may cause him to be more provocative. Kim and his officials long have promised serious, even dramatic action to assure the regime’s security. Some analysts forecast the imminent launch of an SLBM; this worries Washington since submarines are relatively invulnerable to American attack.

Pentagon officials predict that the North will unveil a new ICBM, capable of hitting the U.S. A parade mock-up of the latter—on October 10 the DPRK will be celebrating the 75th anniversary of the Korean Workers’ Party—would be a threat only modestly expressed. A launch, however, would be harder for Washington to ignore. Even more disruptive would be a nuclear test.

Trump would be embarrassed if one of his few claimed foreign policy successes turned into a dramatic and complete fiasco. Before the election, he would have an incentive to respond in a way that demonstrated resolve and toughness to the public. If he returned to “fire and fury,” the two countries might find themselves catapulted back to the mutual threats and insults, and corresponding fears of war, of late 2017.

If he is reelected, an angry Trump feeling personally betrayed might find his inner-Bolton, abandon negotiations, and resume threats. The North’s inevitable response—another threes years of North Korean missile and nuclear development—would exacerbate the crisis. A newly elected Joe Biden, already skeptical of Trump’s approach, also might drop active diplomacy in favor of another round of “strategic patience,” with an emphasis on bolstering ties with South Korea, perhaps leavened with warnings of possible military action.

Instead of tossing away his unique opportunity to engage Kim, Trump should use the North’s current difficulties as an excuse to reestablish contact. He should send a note to Kim, to match those the North Korean leader used to write to Trump. The latter should indicate his concern over the difficulties faced by the people of the DPRK and suggest this would be a good moment to work together for their benefit.

The president should state his interest in relaxing restrictions on travel, making it easier for aid workers and others to visit North Korea when Pyongyang opens its borders again. Moreover, a liaison office is more imperative than ever, allowing communication over constantly changing circumstances, such as weather disasters.

Finally, Trump should suggest, humanitarian problems facing the North demonstrate the need for greater flexibility in sanctions. The president should express his desire to move forward to increase trust and commitment at a time when many people have written off the two nations’ joint commitment to peace. That would require taking a meaningful step toward halting Pyongyang’s production of nuclear material and toward reducing its capacity to produce nuclear material. That is, picking up their discussions from Hanoi.

Both sides should choose negotiators and initiate discussions. The president might note that it is in Kim’s interest to begin the talks now. Few believe that Joe Biden would pick up where Trump left off and, given the record of the Obama administration, Biden seems less likely to pursue the sort of deal Kim is seeking.

However, if Trump and Kim reached an agreement—a reasonable one that would withstand hostile political scrutiny in America—then Biden would be unlikely to revoke it. Even if the Trump administration eliminated or suspended some sanctions. Performance by Pyongyang would be necessary for any permanent rollback, but Trump will be in office until January 20 even if he loses, providing sufficient time to inaugurate a meaningful if limited deal upon which an incoming Biden administration could build.

Even when the president has had a good idea, such as negotiating with pariah nations such as North Korea and Iran, he has assumed that applying “maximum pressure” will cause them states to simply surrender. He’s consistently been wrong and, in the case of Tehran, actually encouraged the regime to do everything America sought to prevent: enrich uranium, disrupt Gulf oil traffic, and attack U.S. forces in Iraq.

In the case of North Korea, the president has seemingly squandered an opportunity to make a good deal. But he still has time left and should use the North’s present difficulties as leverage. However, he would have to find the right Goldilocks solution, applying pressure that is neither too harsh nor soft. Lest that seem utterly improbable, he recently made important progress in the Middle East and Balkans. Why not give the Korean peninsula another try?

Doug Bandow is a Senior Fellow at the Cato Institute. A former Special Assistant to President Ronald Reagan, he is author of Tripwire: Korea and U.S. Foreign Policy in a Changed World and co-author of The Korean Conundrum: America’s Troubled Relations with North and South Korea.