After a highly stable first year in office, the Biden administration experienced a substantial increase in senior staff turnover. The significant uptick in “A-Team” departures moved from five individuals departing in year one to 21 in year two. Though the increase itself is not surprising — all administrations but one since 1981 experienced an uptick in second year “A-Team” departures — the magnitude of the increase is noteworthy.[1] The second-year turnover in the Biden “A-Team” was the second highest (32%) behind Ronald Reagan at 40%. Combining year one and year two, the Biden turnover rate (40%) is the third highest behind Presidents Trump (66%) and Reagan (57%).

The year, 2022, was challenge-filled for the Biden administration: rising inflation, continued struggles with COVID-19, Russia’s invasion of Ukraine, a preternaturally slow confirmation process and fears of a “red wave” rolling over the midterm elections. At the same time, the administration lay claim to important legislative victories on gun safety, semi-conductor manufacturing (CHIPS), prescription drug costs, climate change, and the historic swearing-in of Ketanji Brown Jackson as the first Black woman to serve on the Supreme Court. In addition, the Biden administration’s coalition-building efforts in support of Ukraine have remained robust so far despite the Russian onslaught. None of Biden’s successes could have occurred without the efforts of presidential appointees. This study focuses primarily on turnover in the president’s “A-Team,” defined as 66 senior executive office positions within the Executive Office of the President (EOP). These individuals occupy highly influential positions and do so at the pleasure of the president. Examining the comings and goings of these staff members teaches us something about the functioning of the presidency.

Counting staff departures is a tricky, painstaking endeavor. For the purposes of my research, turnover refers to vacancies created through promotion, resignation, or firing. Any of these movements cause disruption and reduce efficiency since they require White House resources (e.g., hiring, vetting, training, on-boarding). In addition, there is the added burden on staff members who remain, but often take on additional work when staff members depart. High-level staff departures may also have ripple effects and result in lower-level departures within a single office. Junior staff members may depart because they were specifically brought in by their departing boss, or the successor may wish to “clean house” and start with a favored set of individuals. Organizational fallout, in short, may extend well beyond a single departed individual. Those who serve on the “A-Team” are, by definition, critical participants in the working of the presidency, such that any departure affects presidential operations.

Perhaps more importantly, “A-Team” members possess important relations across the government, among key constituents, interest groups, the media, party organizations and others. Broadly speaking, the central role of the modern White House is promotion and coordination, illustrating the importance of external professional relationships. These relationships are simply invaluable. Any successor will need to devote time to re-establish these critical relationships — essentially reinventing the wheel and ultimately reducing the efficiency of White House operations.

Initially, I relied on a single source to determine who among the many White House staff members are most influential: “Decision Maker” editions of the National Journal. From 1981-2009, the National Journal published a special edition at the start of each new administration titled “Decision Makers”. They assigned a group of reporters to identify the most influential staff members in the new administration. Once published, the volume included formal titles, short biographies, and headshots of most of these staff members. The five editions published over the course of 28 years included an average of 60 staff members from the Executive Office of the President (“EOP”), and identified individuals working in the White House Office, the National Security Council, Office of Management and Budget, Council of Economic Advisers, members of the vice president’s office and the U.S. Trade Representative Office, among other entities. Of course, there is variation across administrations in terms of positions selected, but most were recurring. Using this data set of high-ranking presidential staff, I then relied on a variety of web resources, personal interviews, and journalistic accounts to track tenure.

The National Journal stopped publishing this special edition after the Obama administration, at which point I partnered with Bloomberg journalist Madison Alder. In 2017, we collaborated to identify “A-Team” members in the new Trump administration. We systematically compiled every job title in the five editions, noted the frequency with which it was included, and then analyzed the Trump appointments based on the criteria (noted above). It is also important to note that the National Journal’s successive editions included new positions (19 on average), so we added 19 unique positions among the Trump presidential staff. Such a development is not surprising since new presidents like to put their own imprint on the institution or respond to a new crisis or issue by establishing a new office or senior adviser position.[2] I utilized the same approach to create a list of “Decision Makers” for the Biden administration in 2021: matching staff positions to those identified by the National Journal and identifying significant new positions.

A look at the data

Looking at the cumulative turnover after 24 months in office, turnover among the Biden advisers (40%) ranks a distant third behind Ronald Reagan at 57% and Donald Trump at 66%. In sharp contrast, the Obama team had a 24% turnover rate after the first two years in office, and President George H.W. Bush had a 25% turnover rate.

Analyzing turnover from a different vantage point by focusing solely on year two, turnover among the Biden presidential advisers was 32% (or 21 individuals) and ranks second highest behind Ronald Reagan with 40%. Close behind President Biden was President Trump’s second year turnover at 31%, a four percent drop from year one’s record-shattering 35% turnover. Of the 21 individuals contributing to the turnover figure, 17 resigned for a variety of reasons, three were promoted and one resigned under pressure (Office of Science and Technology Director, Eric Lander). This forced resignation may have been the most dramatic of the lot since he resigned, apologizing for verbal abuse of subordinates. His forced resignation was the second of this type under Biden.[3]

A closer look at the 21 Biden “A-Team” departures revealed big names like White House Counsel, Dana Remus; Counselor to the President and Coordinator of the COVID-19 Response, Jeff Zients; Press Secretary, Jen Psaki; and National Climate Advisor, Gina McCarthy. Other critical departures included Assistant to the President and Director of Management and Administration, Anne Filipic. This role has been described as the “administrative backbone” of the White House, and despite the non-policy nature of this position, strong leadership in this office is critical to an administration’s success.

Recall that first year turnover among Biden’s key advisers was one of the lowest, which may have indeed laid the groundwork for a larger uptick than normal during the second year. The reasons for departures are varied (e.g., burnout, more lucrative opportunities in the private sector, a need to move back to one’s home state or a promotion within the executive branch among other reasons), but departures are often the result of cumulative exhaustion (e.g., a hard-fought campaign, a contested election battle, a truncated transition and a challenging first year).

With the better-than-expected midterm election results in the rearview mirror, the new White House preoccupation will be the president’s quest for reelection. No doubt, this quest will be front and center in the mind of the president and many senior advisers, as it has been for prior presidents.[4] Every presidential movement and word will be evaluated with an eye toward its impact on the reelection campaign. In addition, 2022 news stories about the potential departures of three high-level advisers — Ron Klain (Chief of Staff), Cecilia Rouse (Chair, Council of Economic Advisers) and Brian Deese (Director of the National Economic Council) — suggest that the level of turnover will be on the rise. The intensified focus on politics at the cost of policy may encourage some policy-oriented staff members to move on. At the same time, those focused on political outreach (think Office of Public Engagement and Political Strategy and Outreach) often move to the reelection campaign where their political skills can serve the president well (e.g., the 2018 departures of Political Director Bill Stepien and Public Liaison Director Justin Clark, the 2011 departures of Senior Advisor to the President David Axelrod, and Press Secretary Robert Gibbs). The bottom-line is that with cumulative staff turnover at 40%, there is a good chance that by the end of year three, over 50% of the “A-Team” will have moved on. Time will tell and speculating is always risky, but given the experience of the six prior presidents, the White House Presidential Personnel Office may want to begin vetting so they can fill some high-level vacancies.

[1] The one exception was President Trump whose first-year turnover rate was an outlier (35%), and while there was a decline in the second year, it was only down four points (31%).

[2] For example, a new addition at the start of the Biden administration was the emergence of a “Covid-19 Response Team” to oversee vaccine implementation, federal prevention efforts and other pandemic-related tasks designed to develop a comprehensive government response.

[3] The other resignation under pressure was Deputy Press Secretary, TJ Ducklo, in February 2021. 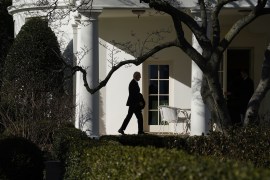 This week on Rational Security, Quinta and Scott were joined by special guest Michel Paradis to talk over the week’s big national security news, including: