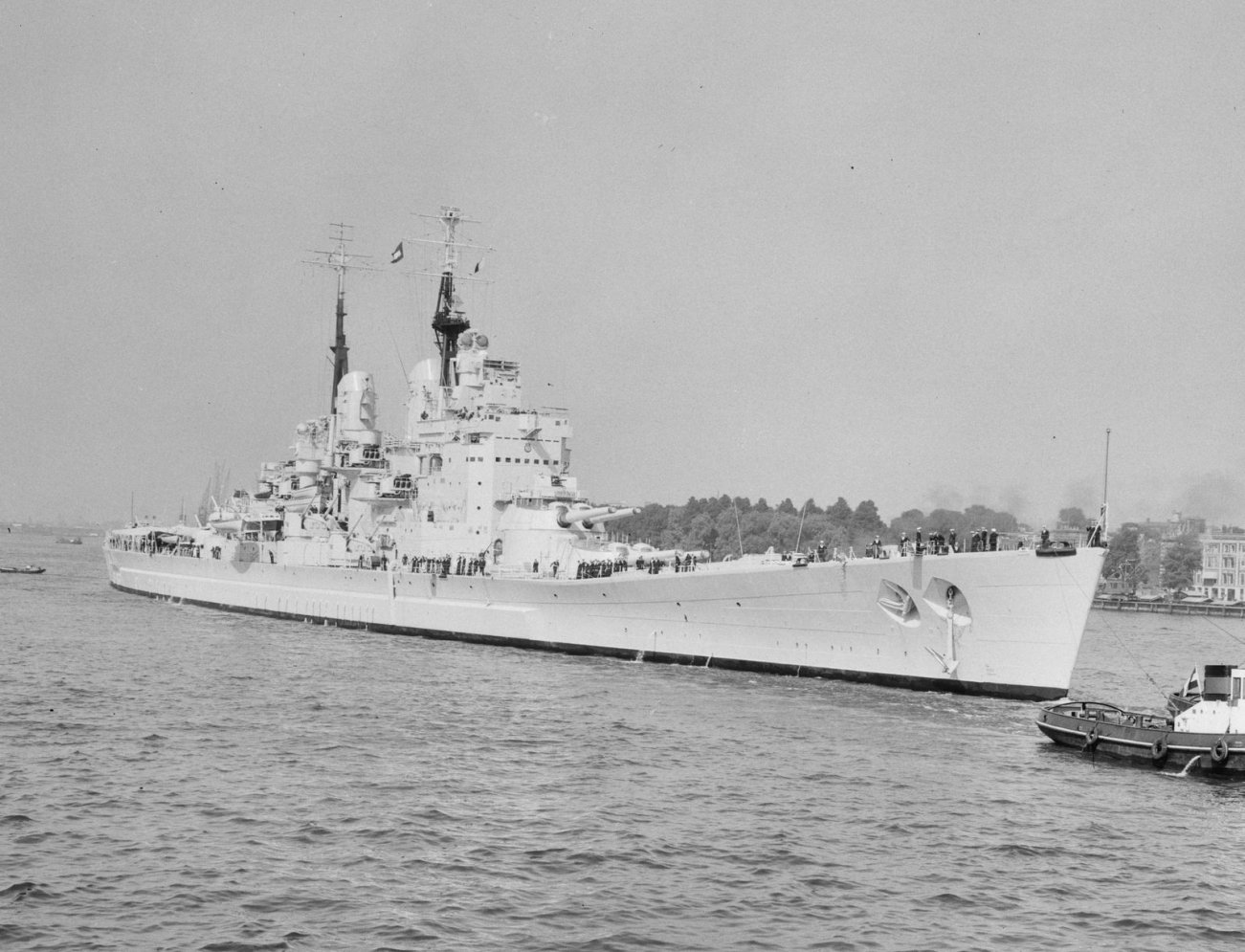 London’s final battlewagon was powerful, but it was born into a world of aircraft carriers.

Key point: The battleship was impressive, but it didn’t have much to do during peace time. Eventually, the ship was put in emergency reserve as the Cold War and modern technology passed it by.

In an effort to take advantage of the superiority of the Royal Navy in World War I, First Sea Lord John “Jackie” Fisher developed a scheme to land British troops in Pomerania, thus directly threatening Berlin and forcing the Germans to withdraw troops from the Western Front. To this end, Fisher authorized design of a group of shallow-draft “large light cruisers” that would carry guns heavy enough to support the landings. HMS Courageous and HMS Glorious would each carry four fifteen-inch guns in two twin turrets, while HMS Furious was expected to carry two eighteen-inch guns in single turrets. The light cruiser designation, incidentally, enabled Fisher to evade government restrictions on the construction of new battlecruisers.

As it happened, the Baltic landings never proved practical, and Courageous and Glorious joined the Grand Fleet as battlecruisers. After the war, the Royal Navy removed the heavy guns and converted all three ships into aircraft carriers, a procedure enabled by the Washington Naval Treaty. All three served in World War II, although only Furious survived the conflict.

The conversions left four twin fifteen-inch turrets lying about, guns that couldn’t be used on new ships because of the Washington Naval Treaty. Gun turrets are among the most expensive and difficult to construct parts of a battleship, however, so they were retained in the hope of future use. The British fifteen-inch/38-caliber gun was regarded as a great success, and suitable for use in later ships.

The Royal Navy’s first post–London Treaty battleships were the five ships of the King George V class, which served with honor in every theater of World War II. The Navy intended to follow these up with the Lions, which would have represented the apogee of British battleship design. Each of the six ships would have displaced 43,000 tons and carried nine sixteen-inch guns in three triple turrets. The Lions would have carried heavier armor than the American Iowa class, with a design speed of twenty-eight knots. However, the war intervened, and the Admiralty determined that smaller ships should take precedence, shifting resources allocated to the Lions to aircraft carriers and antisubmarine craft.

Fortunately, the availability of the four old fifteen-inch turrets meant that a seventh ship, Vanguard, could be completed more quickly than the Lions. Intended for use in the Pacific, the ship would be fast enough to catch and powerful enough to destroy the Japanese Kongo-class battlecruisers. The design went through several evolutions (at one point the Royal Navy declared that the ship would be a replacement for HMS Royal Oak, sunk by U-47 in 1939) before the keel was finally laid in 1941. Work proceeded slowly, incorporating the lessons of the war, and Vanguard was not finally completed until late 1946. It was the last battleship ever launched, although not the last one completed, an honor that would belong to the French Jean Bart.

Displacing 44,500 tons (standard) and capable of thirty knots, Vanguard was the largest battleship ever built by the Royal Navy, and was only exceeded internationally by the Iowa and Yamato classes. However, many of its foreign contemporaries carried a heavier main armament. Vanguard was well armored and an excellent seaboat, but because of its light main battery it likely would have struggled against the Japanese and American super battleships. Visually, its great size made the fifteen-inch turrets look diminutive.

Vanguard saw only limited opportunities for action in the years after the war, but played an important ceremonial role. In 1947 it carried King George VI, Queen Elizabeth and a young Princess Elizabeth on a royal visit to South Africa. Elizabeth had presided over Vanguard’s launching in 1944, the first (but far from the last) such ceremony she would conduct. It was also present at the Coronation Fleet Review of Elizabeth II in 1953. Vanguard spent the rest of its career with the Home Fleet and the Mediterranean Fleet. It was placed in reserve in 1956.

The Royal Navy has rarely demonstrated the same enthusiasm for ship preservation found in the United States. Several of the most storied battleships of the twentieth century (HMS Warspite, HMS Rodney, HMS Queen Elizabeth) were quickly sold to the scrappers after World War II, in part because of the demands of postwar austerity. Four King George V–class ships survived until 1958 before meeting the same fate, leaving Vanguard as the only remaining Royal Navy battleship. Desultory efforts at preservation failed, perhaps in part because of its brief, uneventful career, and Vanguard went to the cutters in 1960.

Vanguard was an idiosyncratic curiosity, but would have filled its role effectively if it had been completed in time. Although not comparable to its contemporaries of modern design and armament, it was a beautiful ship, and well worthy of service to the royal family.

The above is part of an ongoing National Interest series based on Robert Farley’s recent publication, The Battleship Book.

Robert Farley, a frequent contributor to TNI, is author of The Battleship Book. This first appeared in 2019 and is being reposted due to reader interest.