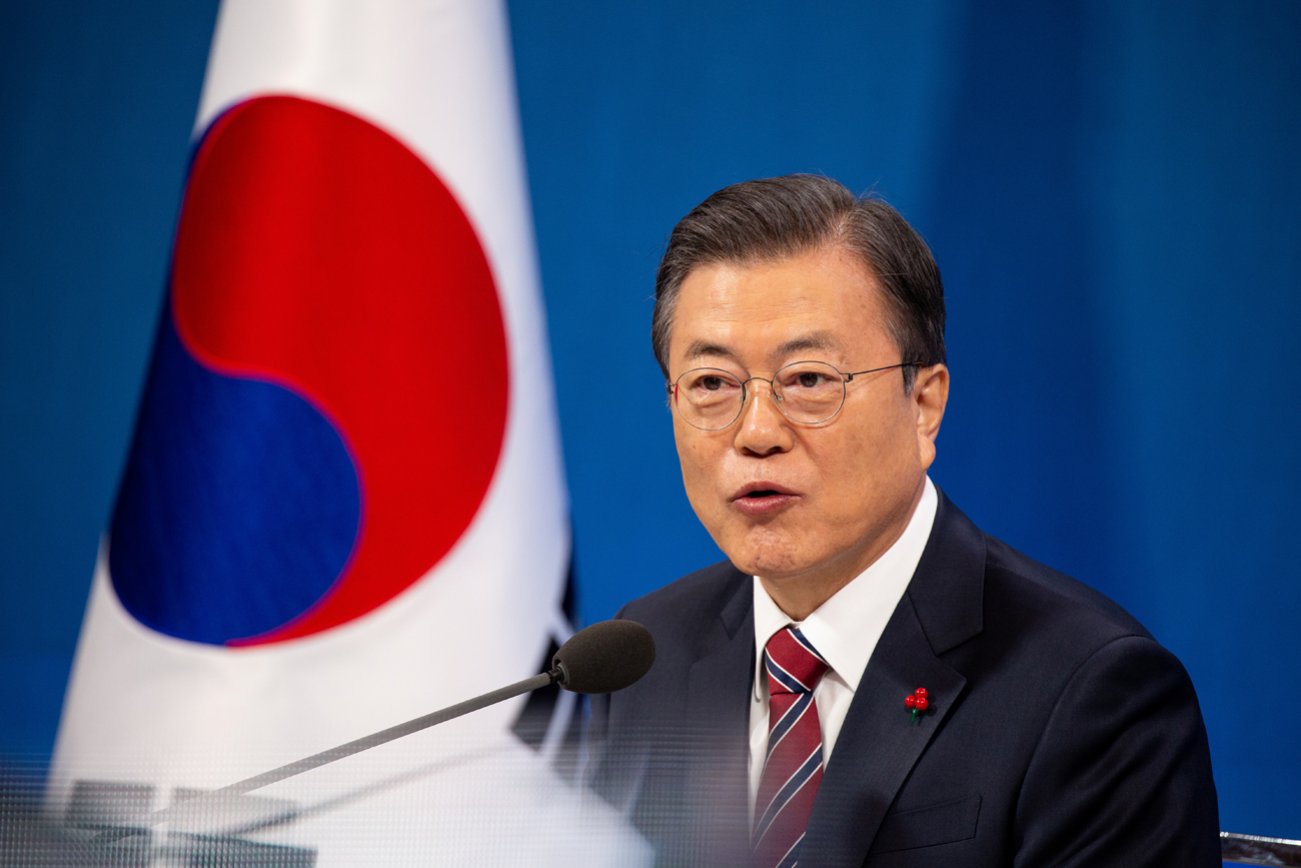 Moon should deemphasize the DPRK and focus on other issues. Taking risks could yield one or more diplomatic breakthroughs as important and unexpected as his forlorn push for detente with Pyongyang.

It isn’t easy being a progressive president of South Korea. The world has refused to conform to South Korean President Moon Jae-in’s expectations.

He hoped for détente with North Korea, especially after the country’s supreme leader, Kim Jong-un, held a summit with President Donald Trump. However, after the failure of the Kim-Trump meet-up in Hanoi, Kim dismissed Moon’s efforts with contempt. Last year the North further humiliated Moon by destroying the liaison office constructed by Seoul. Contra South Korean hopes, the Eighth Congress of the Workers’ Party of Korea (WPK) earlier this month failed to offer any friendly words for Moon.

The South Korean president also hoped to repair once warm ties between the ROK and China after the 2016 clash over the THAAD missile defense deployment. Although Beijing ended its economic war on the South shortly after Moon took office, the relationship remains fraught. Last year Chinese social media erupted against the boy band BTS for praising the wartime U.S.-ROK relationship. Seoul also found itself under pressure from the other direction, as Washington urged the Moon government to criticize the People’s Republic of China (PRC) over its crackdown in Hong Kong.

The South’s relations with Japan went from bad to worse. The inability of South Koreans to let go of history combined with Tokyo’s inability to recognize the genuine pain caused by history led to multiple clashes over “comfort women,” who had been forced into brothels for Japanese soldiers during World War II, and conscript labor from what then was a Japanese colony.

Tokyo contended that such claims had been settled by the 1965 treaty regularizing the two governments’ relations and a 2015 agreement between Moon’s predecessor and Tokyo. However, the threat of South Korean courts to seize Japanese company assets to satisfy damage claims triggered trade sanctions by Tokyo, followed by suspension of intelligence cooperation by the Moon government. In turn, Washington criticized Seoul, which reluctantly reestablished the intelligence ties. The rise of a new Japanese prime minister, Yoshihide Suga, led to hope for renewed negotiation, but nationalist passions remain hot.

Then there is the United States. Moon surely recognizes that having an American defense guarantee is convenient; otherwise the ROK would have had to double or treble its military budget. Nevertheless, many on the left blame Washington for the original sin of Korea’s division. Moreover, U.S. support for military regimes opposed by the former human-rights lawyer must rankle. Worse, even today, after seven decades, American administrations effectively set South Korean security policy on the peninsula.

What should Moon Jae-in do?

With fifteen months left in office, his opportunities to improve the Republic of Korea’s stature and security are diminishing. He could help his country the most by challenging some of the shibboleths of progressive rule. For a country long known as a shrimp among whales, Seoul would do best to root its foreign policy in the sometimes unpleasant reality.

North Korea is likely to be with the ROK for years if not decades. The Democratic People’s Republic of Korea poses a severe challenge to the South because of the nature of the regime. The WPK was born surrounded by Soviet guns. Kim’s grandfather, Kim ll-sung, was chosen by Joseph Stalin’s Soviet Union, went to war armed by Moscow, and survived near disaster in the Korean War with the support of Mao Zedong’s China. The North was forged by oppression and war.

Although the regime has moderated over time, there still is no hint of liberalization on politics or human rights. Kim Jong-un implemented some economic reforms, though he has retreated some recently, and demonstrated talent as a diplomat, suggesting an opening to promote better bilateral ties. Although he may not share his grandfather’s willingness to use war to achieve reunification—Kim has hyped the importance of improving the economic well-being of his people—Moon should not expect a new North Korea from a leader who has executed subordinates, tightened border security even pre-coronavirus, and targeted access to information from abroad.

To start, Moon should stop begging Kim to negotiate. Rather, the South Korean president should send Kim, recent recipient of his father’s title of WPK general secretary, a tough note. With the next South Korean presidential election a little more than thirteen months away, Moon’s ability to make significant policy changes and gain legislative action, if necessary, will steadily shrink. If Pyongyang wants to move the relationship forward, as Moon has proposed, then it needs to act soon.

Moon should insist that the North Korean leader treat the South with respect. If not, then Kim will lose his best opportunity to demonstrate positive results which might improve chances for sanctions relief from the new Biden administration. Moreover, Moon should warn that Seoul would take a no from Kim as a security threat and respond accordingly, with an enhanced military budget and closer relationship to the United States. Finally, Moon should explain that continued DPRK recalcitrance would enhance chances of the election of a conservative ROK president less inclined to deal with the North.

Moon also should spend his final months in office preparing for the potential fall-out from the deteriorating U.S.-China relationship, which threatens to pull South Korea into the maelstrom. Whatever America’s problems, the PRC is a far more threatening power for the South and surrounding region. Although China is very unlikely to attempt physical conquest, it does seek to dominate the region.

The Biden administration is likely to continue toughening Washington’s stance toward the PRC and pushing for South Korean support, a difficult request to reject given America’s seventy-year-plus military commitment to the South’s security. Indeed, attempting neutrality could rupture the alliance. To balance its two most important relationships Seoul needs to consider under what circumstances it is prepared to decouple economically from China and back U.S. military operations against the PRC.

These profound questions would be best considered before a crisis hits. While everyone hopes that Washington and Beijing will avoid a clash, Taiwan is becoming an ever more dangerous flashpoint. Chinese officials appear to be increasingly impatient with Taipei and angry at U.S. involvement. Although Washington appears to be toughening its position on Taiwan, the former’s policy of strategic ambiguity could lead to mistakes and misperceptions all around.

Japan poses a very different problem. History is difficult to forgive and forget, especially when successive Japanese governments displayed more conceit and condescension than remorse and regret. Even when Tokyo’s position seems indefensible, Japanese officials are defensive when they should be apologetic.

Nevertheless, the ROK needs Tokyo as a friend and ally. South Korea exists in a bad neighborhood, with North Korea, Russia, and China nearby. Southeast Asian states are at best dubious and uncertain partners. Australia and India are too distant. Which leaves Japan, a fellow democratic industrialized state allied with America, as the best option. To his credit, Moon reached out to Suga; both governments should prioritize finding a modus vivendi that allows them to focus on common threats. With credibility on the left and a legislative majority, Moon could move the relationship forward if Tokyo was prepared to respond positively.

Finally, there is the United States. As has long been evident, the South pays a high price in lost sovereignty for the privilege of being defended by a superpower. That means being burdened with a status of forces agreement, enduring the consequences of hosting thousands of largely young, male foreigners, and turning defense decisions over to a nation with its own, and often different, security interests. Sharp disagreements between the two governments arose over Seoul’s response to North Korean military provocations and desire for OPCON transfer.

Moon’s greatest frustration has been his inability to offer the North economic aid and trade, which could strengthen ties and help draw Kim into denuclearization talks. However, with Washington in control of sanctions policy, the ROK is largely impotent. Yet South Korea obviously has much greater interest in ties with and is at greater risk from the North. Were the alliance more equal, Seoul’s concerns would receive greater respect. Given Biden’s interest in rebuilding alliances, the new U.S. president might be receptive to a request from Moon to rebalance the relationship.

Moon’s presidency is ebbing with little expectation that he will achieve much in foreign policy. His signature commitment to détente with the North appears dead in the water. The impact of a China-U.S. cold or hot war could fall more heavily on the ROK than any other nation. Despite the change in governments in Japan, improving relations between Seoul and Tokyo remains politically toxic. Washington’s commitment to South Korea’s defense almost inevitably puts Seoul in a subordinate position.

Rather than giving up, however, Moon should deemphasize the DPRK and focus on other issues. The fact that he does not need to face the voters again gives him greater freedom to address these difficult relationships. Being a noted progressive would allow him to challenge left-wing verities. Taking risks could yield one or more diplomatic breakthroughs as important and unexpected as his forlorn push for detente with Pyongyang.

Doug Bandow is a senior fellow at the Cato Institute. A former special assistant to President Ronald Reagan, he is the author of Tripwire: Korea and U.S. Foreign Policy in a Changed World and co-author of The Korean Conundrum: America’s Troubled Relations with North and South Korea.