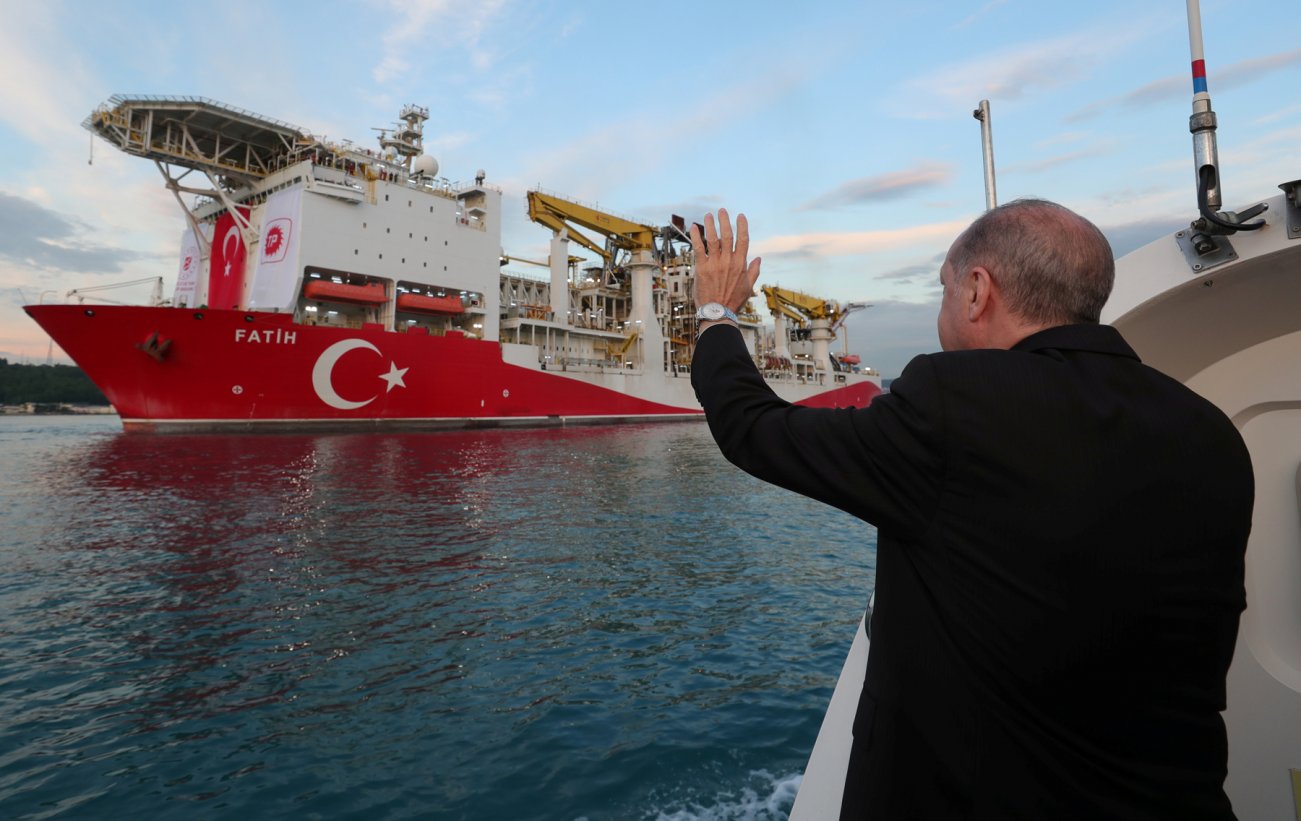 Erdogan appears to feel that his aggressive policies, which include lunging after energy resources and are reminiscent of Ottoman behavior, have broad domestic support.

Heightening tensions over energy reserves in the Eastern Mediterranean, which recently led to a collision between Greek and Turkish warships, have cast renewed attention on Turkey’s aggressive regional policy.

The country hosts senior Hamas operatives and allows them to plot terrorist attacks against Israel from Istanbul. It sent troops to Qatar after Doha was accused of supporting terrorism by Arab countries and blockaded. It attacked Kurds in Syria who helped the United States fight ISIS. And it threatened to cut ties with the United Arab Emirates (UAE) over the recently announced peace deal with Israel—even though Turkey has an embassy in Tel Aviv.

Turkish president Recep Tayyip Erdoğan has extended this belligerent approach to the Mediterranean, sending soldiers to war-torn Libya and tipping the scales in favor of the Muslim Brotherhood-influenced Government of National Accord (GNA), which is fighting the Egypt and UAE-backed Libyan National Army. He reached a maritime agreement with the GNA to delimit their exclusive economic zones (EEZ), which utterly ignored the rights of Cyprus and Greece—the latter of which is Turkey’s NATO ally.

Both countries are threatened by Turkey’s attempts to turn swaths of the Mediterranean into the Turkish Sea. Ankara is using this dubious deal to legitimize energy explorations in areas that, by any measure of international maritime law, are Greek and Cypriot economic waters, and is threatening to use its navy against anyone who tries to intervene—even though this would be a gross violation of international law.

This situation is made possible by the weakness of the European Union, which is unable to act unanimously even when member states are confronted by a hostile neighbor and the United States fails to exert its influence. Erdogan has learned that the use of force pays off unless the other side is willing to respond with greater force—like Israel, for example.

What motivates Turkey? While the country is recovering relatively well from the coronavirus pandemic, it continues suffering from an ongoing economic crisis. Erdogan appears to feel that his aggressive policies, which are reminiscent of Ottoman behavior, have broad domestic support. He seems to sense the weakness of other powers in the region, especially the EU, and he wants to expand his country’s influence at the expense of others in the Mediterranean—which, without U.S. backing, are left largely defenseless.

The massive intervention of the Turkish army in Libya poses an immediate threat to Egypt, where the Muslim Brotherhood, of which Erdogan has become the informal leader, is the regime’s biggest enemy. There is also real disdain for the Turks in Egypt, which was once under Ottoman rule, and tensions between the parties were acute even before the latest developments. Egypt has thus far refrained from sending troops to counter Turkish influence in Libya, in part due to its current dispute with Ethiopia over the Nile River. Egyptian president Abdel Fattah el-Sisi must decide what endangers him more and act accordingly.

Aside from a recent statement in support of Greece, Israel has so far not been involved in either conflict. Libya is far from Israel, and Turkey does not threaten to infringe on Israel’s EEZ in the Mediterranean. Turkey’s claims overlap those of Greece and Cyprus. The friction between Israel and Turkey these days concerns Ankara’s support for Hamas, as well as its efforts to gain influence among Palestinians by investing in eastern Jerusalem. When Erdoğan turned the Hagia Sophia back into a mosque, there was talk that the Al-Aqsa Mosque in Jerusalem was next in line to be liberated—but Turkey has been wary of using force in the Israeli context since the 2010 Mavi Marmara fiasco.

However, Israel has clear plans to connect to Europe via a gas pipeline and power cable that are supposed to pass through Cyprus. Will Turkey try to interfere with these projects, on the basis that they cut into the EEZ that Ankara established with the support of the GNA? That would be a Turkish invitation to a military confrontation with Israel, which will not hesitate to defend its vital interests in the Mediterranean.

Regardless, it seems that the eastern Mediterranean may degenerate into an armed conflict with or without Jerusalem’s involvement—an unfortunate reality made possible by European incompetence, American indifference, and unrelenting Turkish aggression.

IDF MG (ret.) Yaakov Amidror is a Distinguished Fellow at the Jewish Institute for National Security of America’s Gemunder Center for Defense and Strategy. Amidror was formerly the National Security Advisor to Israeli Prime Minister Benjamin Netanyahu, as well as the head of Israel’s National Security Council from 2011-2013.