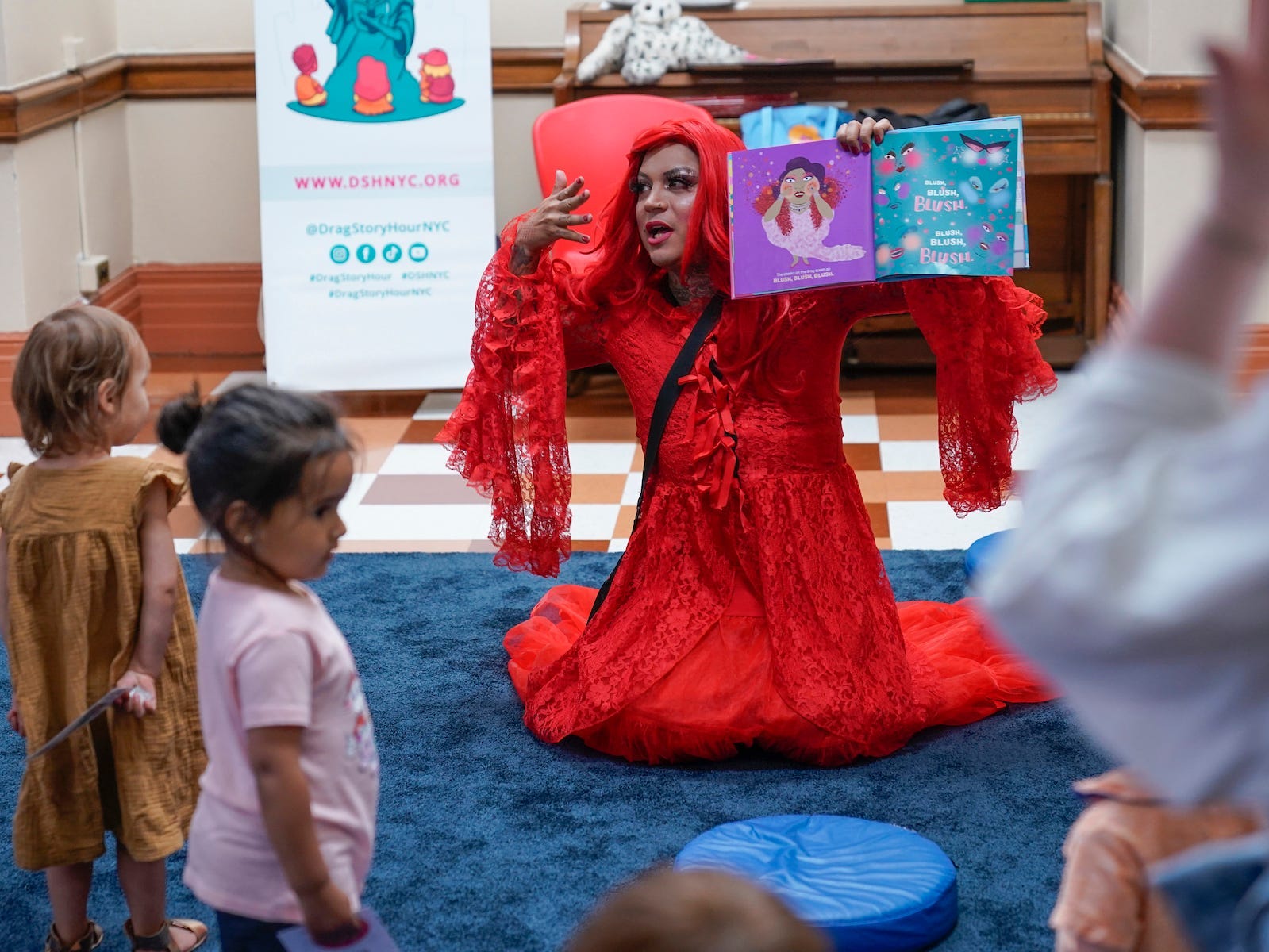 A drag queen who goes by the name Flame reads stories to children and their caretakers during a Drag Story Hour at a public library in New York, Friday, June 17, 2022.

An Oklahoma bill would make it a felony punishable by up to a $20,000 fine for drag artists to perform in front of minors.

The bill would make it “unlawful for a person to engage in an adult cabaret performance” in public before a minor. The fine may fall in the range of $500 to $20,000, and it may also incur a prison sentence from 30 days to two years, according to the bill’s text.

State GOP Rep. Kevin West, who filed House Bill 2186 on January 19, did not immediately respond to Insider’s request for comment.

The bill also specifically named drag queen story hours as events that would be considered unlawful, as well as other forms of “adult cabaret” performances. It would also create a misdemeanor for anyone who organizes or authorizes such performances in public or in view of minors, threatening a fine of $500 to $1,000 and a maximum of a year in county jail.

The bill compared drag performers to strippers and topless dancers, defining “drag queen” as a “male or female performer who adopts a flamboyant or parodic feminine persona with glamorous or exaggerated costumes and makeup.”

One activist on Twitter also suggested that the wording may criminalize a woman displaying a “feminine persona” with heavy makeup around children, per Newsweek.

The bill is scheduled to have its first reading in the Oklahoma House on February 6, per the Oklahoma legislature’s website.

It follows a trend of similar legislation gaining traction nationwide to limit drag performances, such as in Arizona, Texas, Idaho, Michigan, Montana, Missouri, Tennessee, Nebraska, South Carolina, and West Virginia, according to reporting by Newsweek and the ACLU. Drag story hours in California and North Carolina, and other states, have also been targeted by the Proud Boys, a far-right extremist group, over the past year.

In October, a coalition of Republicans in the US House introduced a bill to “Stop the Sexualization of Children,” specifically targeting drag queen story hours as “sexually-oriented events,” Insider previously reported. The bill would give parents grounds to sue public entities that use federal tax dollars, such as public libraries, for “sexually explicit materials or programs.”