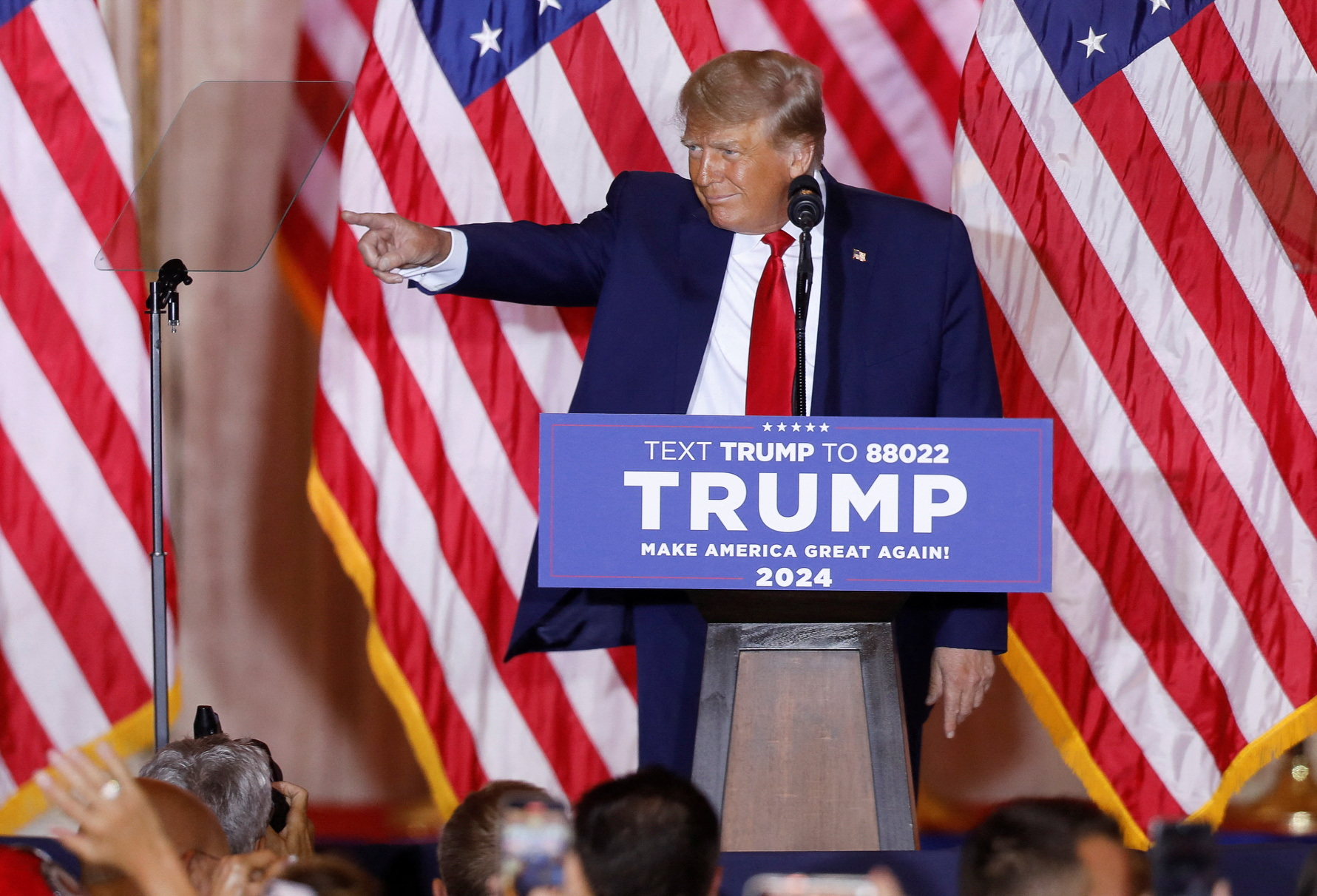 Former U.S. President Donald Trump makes an announcement of his plans to run for president in the 2024 U.S. presidential election at his Mar-a-Lago estate in Palm Beach, Florida, U.S. November 15, 2022. REUTERS/Octavio Jones

Donald Trump sucked up political donations at an unprecedented scale for a former U.S. president, pulling in at least $170 million ahead of this year’s midterm elections.

Now that he has kicked off a fresh run for the Republican nomination, he faces a problem – how to use $69 million that his Save America political action committee reported having in the bank in late October, which campaign laws say he can use on any candidate for office but himself.

A recent multimillion-dollar transaction could show how Trump might get around that restriction.

Save America, which Trump registered after the 2020 election to finance political allies, wired $20 million on Oct. 3 to Make America Great Again Inc, also known as MAGA Inc, a fundraising group tied to Trump that was founded in September and supported candidates endorsed by the former leader in the midterms, campaign finance disclosures show.

Many U.S. election law experts expect that MAGA Inc will spend money to support Trump’s 2024 campaign, which he officially kicked off on Tuesday.

Registered as a Super PAC, MAGA Inc is allowed to spend unlimited sums supporting candidates but is not allowed to coordinate spending with their campaigns.

Because Trump is not registered as the head of MAGA Inc, his defenders could argue that future MAGA Inc spending was done independently, and therefore allowed under campaign finance laws, said Dan Weiner, director of the Brennan Center’s Elections and Government Program.

“That’s a gray area in the law that they might try to exploit,” said Weiner, a former lawyer at the Federal Election Commission.

Since early in his 2016 campaign, through his four years in the White House and since, Trump has flaunted norms of American politics, most notably by continuing his false claims that his defeat was the result of fraud.

He drew criticism from some Republicans during the midterms, when the party did less well than expected, that some of his aggressive fundraising was drawing money away from candidates for Congress.

The Campaign Legal Center, a non-partisan government watchdog, on Monday asked the FEC to open a probe into the movement of the money, arguing that because MAGA Inc is staffed by current and former Trump aides, it is “obviously intended to fund support for Trump’s 2024 presidential candidacy.”

According to the complaint, the FEC should bar Save America from making future transfers to MAGA Inc and “seek appropriate sanctions for any and all violations.”

The FEC said it does not comment on litigation, while Trump spokesman Taylor Budowich, who is reportedly also overseeing MAGA Inc, did not respond to requests for comment.

The regulator’s six-person leadership commission is evenly split between Republicans and Democrats, and launching a probe into Trump’s finances would likely require a Republican commissioner to side with Democratic colleagues.

However, Trump’s decision to launch his presidential bid nearly two full years before the Nov. 5, 2024, election could give watchdog groups time to use U.S. courts to force more scrutiny of his campaign finances, said Kenneth Gross, the former head of the FEC’s enforcement division.

If the FEC doesn’t act on the Campaign Legal Center’s request for a probe, the group could ask a judge to order the regulator to launch an investigation. Even then, probes into coordination are “among the more difficult investigations” at the FEC, Gross said.

A majority of FEC commissioners must also approve any enforcement action. A deadlock could lead to further court cases, potentially running out the clock before the 2024 election.

“Unless you’ve got some smoking guns,” said Gross, “it takes time.”