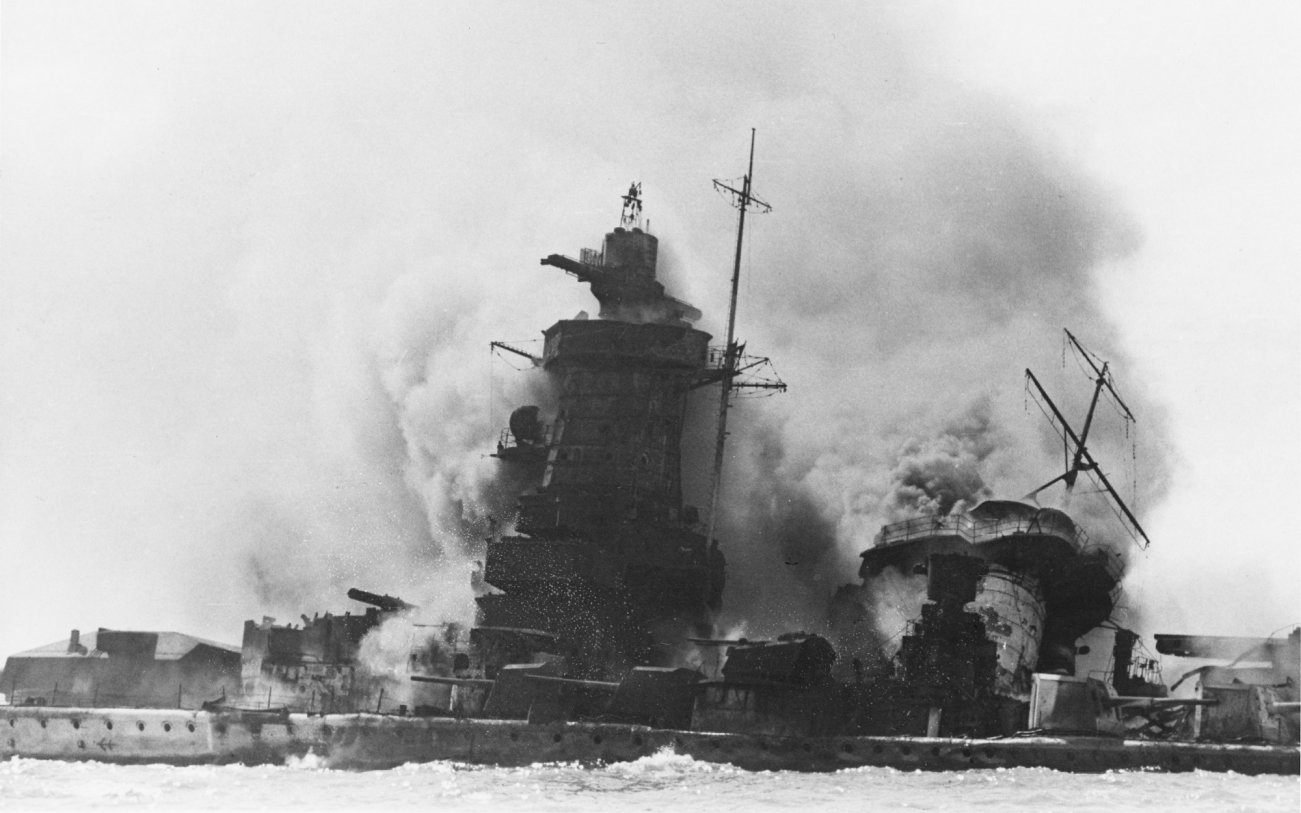 The loss of the Graf Spee was a blow to the prestige of Hitler’s small but expensive navy.

Key Point: In the Battle of the River Plate, psychology counted as much—and perhaps more—than firepower.

Just before he put the gun to his head and pulled the trigger, the German officer penned a final note.

“For a captain with a sense of honor, it goes without saying that his personal fate cannot be separated from that of his ship,” wrote Hans Langsdorff on December 19, 1939, in a hotel room in Buenos Aires. Langsdorff finished his letter to the Nazi ambassador to Argentina, lay down on a German battle flag, and shot himself.

Langsdorff had been the commander of the Admiral Graf Spee, which had been prowling the South Atlantic the week before, and now was resting on the bottom of the harbor at Montevideo, Uruguay. Many a captain has chosen to atone for the loss of his ship by going down with it. Langsdorff had suicide with a pistol two days after he had ordered his ship to be scuttled.

“I can now only prove by my death that the fighting services of the Third Reich are ready to die for the honor of the flag,” he wrote.

But what had led Langsdorff to kill himself? Why meet death in a hotel room instead of at sea? Therein lays one of the most remarkable sea battles of all time: how the Royal Navy bluffed a German battleship into sinking itself.

Of course, the Graf Spee had been born into deception. It was built in the early 1930s, when Hitler pretended to honor the Treaty of Versailles, which limited Germany to warships less than 10,000 tons. With the Graf Spee weighing in at 16,000 tons, the Germans initially gave it the innocuous name of “panzerschiff” (armored ship).

The British had a more ominous—and more accurate—name for the Graf Spee and her sisters Deutschland and Admiral Scheer: “pocket battleships.” Though a third the size of a true battlewagon like the Bismarck, the Deutschland-class ships packed battleship-class eleven-inch guns, rather than the eight-inch guns of a heavy cruiser. The first all-diesel warships, their combination of speed, long range and heavy armament made them ideal raiders to hunt merchant vessels.

When war broke in September 1939, the Graf Spee was dispatched south in search of easy prey in the South Atlantic and Indian Ocean, a vast area made for the long-legged pocket battleship. The Graf Spee‘s career was short but productive, accounting for nine ships totaling 50,000 tons.

Yet the noose was closing as Allied task forces scoured the oceans for the elusive German raider, whose location was marked by the distress calls transmitted by its victims. One of those task forces consisted of the British heavy cruiser Exeter and the light cruisers Achilles and Ajax, all under the command of Commodore Henry Harwood.

Based on a message from the Graf Spee‘s last victim, the merchant ship Doric Star which was sunk off South Africa, Harwood shrewdly guessed the raider would sail west toward the River Plate estuary between Argentina and Uruguay. At 06:10 on December 13, 1939, Harwood’s force sighted smoke on the horizon, which turned out to be the Graf Spee. Langsdorff had also spotted the British cruisers, but judged them to be destroyers guarding a convoy. Here there would easy pickings for a battleship, he thought until it was too late.

The Battle of the River Plate was a battle that should never have happened. The British cruisers with their eight- and six-inch guns steamed at full speed toward a battleship whose eleven-inch guns outranged them, like a boxer with longer arms than his opponent. Yet the Graf Spee also had a glass jaw. With no Axis ports in the South Atlantic, there was no place to seek refuge or repair: if the ship was damaged, it would have to sail 8,000 miles, past the Allied naval blockade of Germany, to reach a German port. In fact, the Graf Spee had been instructed not to engage heavy enemy warships.

Nonetheless, in the best naval tradition, Langsdorff ordered full speed and sailed toward the British. Perhaps he had no choice. With his ship and its engines badly in need of maintenance after months at sea, he couldn’t count on escaping the cruisers, which would shadow him while they called in reinforcements.

It was three sharks versus a killer whale in a maelstrom of shell splashes, gun smoke and twisting ships. As with hunting packs, the British ships attacked from different directions to force the Graf Spee to split its fire. When the Graf Spee concentrated on the Exeter, the Achilles and Ajax would close and unleash a salvo to draw the battleship off their sister (both the German and British ships launched torpedoes, none of which hit).

Nonetheless, within the first thirty minutes of the fight, the British were losing. The Exeter had been badly damaged, the heavy cruiser losing two eight-inch gun turrets and with its bridge smashed. The Achilles and Ajax were also hit. With its bigger guns and a speed almost as fast as the cruisers, the German battleship might have finished off its opponents and continued its voyage.

But as so often in battle, the enemy sees a less rosy picture. The battleship had taken a hit from an eight-inch shell that damaged its fuel system so badly that it only had sixteen hours of endurance. Making it back to Germany was impossible, and Langsdorff well knew that more Allied warships were on their way. With no Axis ports in the South Atlantic, the only refuge lie in a neutral harbor. The Graf Spee limped toward Montevideo, Uruguay, shadowed by the battered but still feisty British task force.

Yet when the German battleship sailed into the estuary of the River Plate at Montevideo, Langsdorff realized that instead of refuge, he had boxed himself into a trap. Under the Hague Convention, a belligerent’s warships were only allowed to remain in a port belonging to a neutral nation for twenty-four hours. And he could see the British warships waiting outside the harbor.

And now came subterfuges worthy of a spy novel. International law also stipulated that before a belligerent’s warship could leave a neutral port, it had to wait at least twenty-four hours after an enemy merchant ship had left that port (thus giving the prospective victim time to get clear). So, Britain and France arranged for their merchant ships to leave Montevideo at intervals to keep the Graf Spee from sailing, while Harwood’s ships made smoke outside the three-mile limit of Uruguayan waters to give the impression of a larger force. With a skill in deception that they would frequently display during World War II, the British spread rumors that an aircraft carrier and battlecruiser were waiting outside the port. In truth, those ships would take several days to arrive from Gibraltar: the only reinforcements the British actually received was the dilapidated old heavy cruiser Cumberland. Even now, with Harwood’s force low on ammunition, the Graf Spee might have been able to escape to neutral but Nazi-sympathizing Argentina.

Yet Langsdorff was crushed by contradictory pressures that would have strained any captain. The pro-British Uruguayan government had ordered him to leave or be interned. Berlin ordered that the battleship should not be interned. Seeing no point in sacrificing his crew in what he believed would be a suicidal battle against a superior British force, on December 17, 1939, Langsdorff ordered the Graf Spee to be scuttled. Uruguayan authorities allowed the captain and crew to proceed to Buenos Aires, where they discovered the Argentinean press had labeled them cowards and the government intended to intern rather than repatriate them to Germany. Two days later, Langsdorff shot himself.

The loss of the Graf Spee was a blow to the prestige of Hitler’s small but expensive navy, for which even the loss of a single heavy warship was significant. Within six months, the Bismarck would join the Graf Spee on the Atlantic sea bed. Within eight months, HMS Exeter would be sunk by the Japanese at the Battle of the Java Sea.

In the Battle of the River Plate, psychology counted as much—and perhaps more—than firepower. The British cruisers had taken a beating, but the Royal Navy’s proud tradition of aggressiveness in the face of daunting odds had paid off yet again. Regardless of who had the bigger guns, in the end, the Germans thought themselves beaten—and the British did not.

And the Graf Spee? She still rests at the bottom of Montevideo harbor. Last year, the Uruguayan government announced it would auction off an artifact recovered from the vessel: a bronze eagle gripping a swastika in its claws. It will be a tawdry ending for an epic battle and a tragic fate.

For further reading: River Plate 1939: The Sinking of the Graf Spee by Angus Konstam.

This first article appeared several years ago and is reprinted due to reader interest.