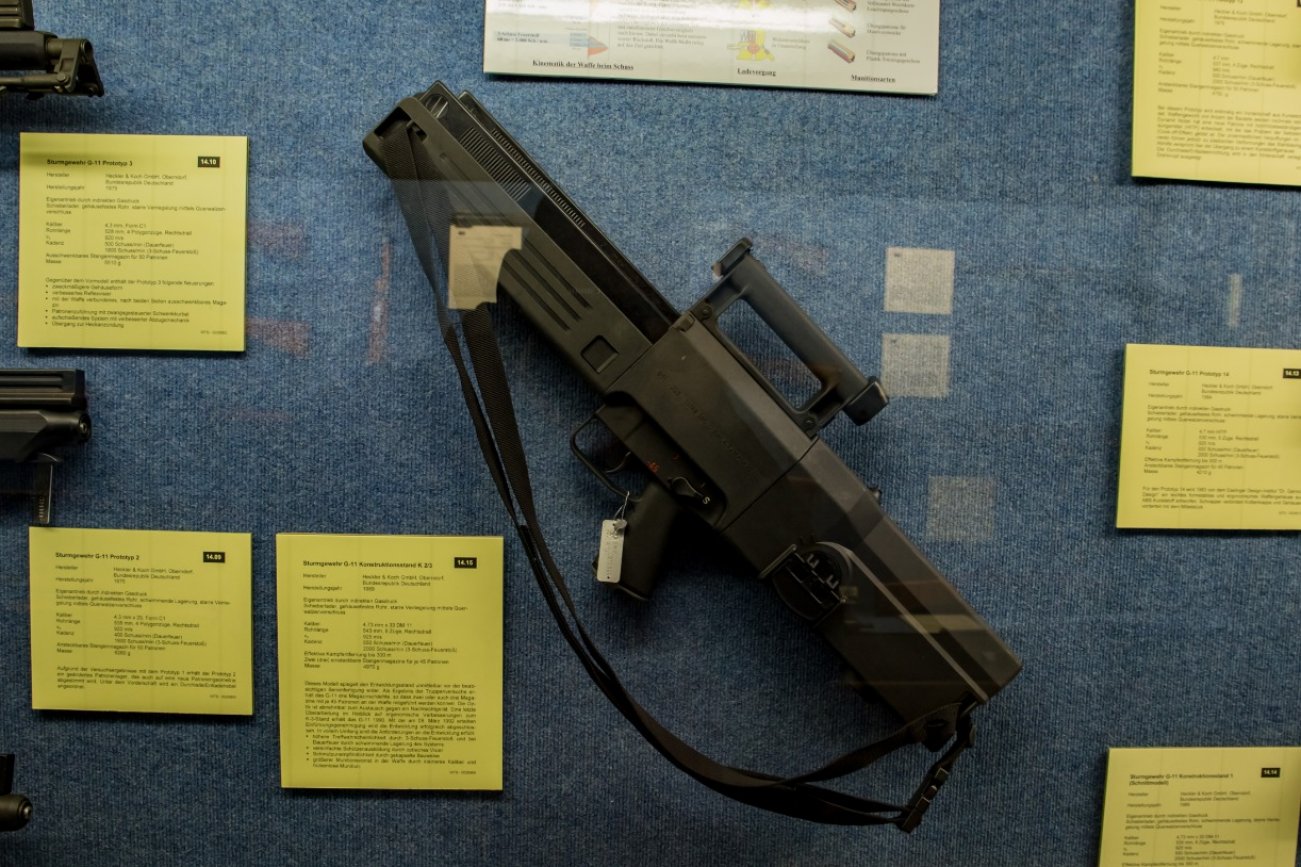 It was just too complicated.

Here’s What You Need To Remember: Although technically a success the G11 had problems. Early rifles tended to cook off ammunition, firing them prematurely as the heat buildup from previous firings detonated the gunpowder. Without a brass barrier between the heat and the gunpowder, more heat was transferred quicker to what was supposed to be a combustible substance. A reformulation of the propellant fixed the problem.

In the last days of the Cold War, West Germany developed perhaps the most advanced assault rifle of all time. A compact weapon capable of firing a withering 2,100 rounds per minute, the Heckler and Koch G11 utilized technologies not seen even in today’s armies. The advanced nature of the G11 came at a considerable cost however, as the gun was much too complicated to be practical on an increasingly unlikely battlefield.

For decades the armed forces of West Germany, the Bundeswehr, utilized the G3 battle rifle. Adopted in 1959 to replace surplus American-made M1 Garand rifles, the G3 itself had a World War II lineage, being a refinement of the StG 44 assault rifle. The G3 was a delayed blowback weapon chambered in 7.62-millimeter NATO and capable of fully automatic fire. It took a twenty round magazine and was made of metal stampings and plastic. Tough and reliable, the G3 served for more than three decades in the Bundeswehr.

In 1969, the German Army put out a requirement for a new weapon with a very high first round hit probability. German arms manufacturer Heckler and Koch determined that a rifle with a very high rate of fire firing short, sharp bursts was best suited for the job. A burst of three rounds, for example, could achieve sufficient dispersion to allow at least one bullet to hit the target.

With that goal in mind, Heckler and Koch engineers went to the drawing board to design a weapon. One of the first conclusions they came to was that traditional gun operating systems—and using brass-cased bullets—was too slow for their purposes. Eliminating the ejection process from a gun would allow faster firing rates, so Heckler and Koch designed one of the first so-called “caseless” rounds.

Instead of a brass casing fitted with a primer and loaded with powder and a bullet, H&K designed a smaller round that was encased in gunpowder propellant. While conventional guns ejected the brass casing through a side port in the weapon after firing, a caseless gun dispensed with that process entirely, and even dispensed with the ejection port itself. This resulted in larger magazine capacities and the elimination of the firing port promised a weapon less likely to be fouled by dirt, dust or other battlefield crud.

The G11 rifle itself looked more like a gun case than an actual gun, a rectangle shaped object with a pistol grip. The 4.7-millimeter caliber barrel was free floated for accuracy, concealed within a metal tube that was in turn deep within the weapon body. The G11 had an overall length of just 29.52 inches but concealed a 21.25 inch barrel. Unlike conventional assault rifles, the fifty round magazine lay horizontally and parallel to the barrel. The operating system fed bullets from the magazine and turned them horizontally ninety degrees before inserting them into the breech.

The actual firing process was the realization of Heckler and Koch’s goal. The G11’s rate of fire was 600 rounds per minute in cyclic mode but an astonishing 2,000 rounds per minute while discharging three round bursts. To achieve accuracy during burst mode the weapon was designed to release the recoil impulse only after the third round had been fired. This gave the weapon a high degree of accuracy and allowed for exceptionally small groupings against targets—resulting in the Bundeswehr’s desired high hit probability. The G11’s burst mode had such a high rate of fire that a burst sounded more like a large, rolling explosion than three distinct gunshots. The large fifty round magazine, more than twice as large as the G3’s, meant a German soldier could fire at least sixteen such bursts before reloading.

Although technically a success the G11 had problems. Early rifles tended to cook off ammunition, firing them prematurely as the heat buildup from previous firings detonated the gunpowder. Without a brass barrier between the heat and the gunpowder, more heat was transferred quicker to what was supposed to be a combustible substance. A reformulation of the propellant fixed the problem.

By far the greatest problem with the G11 was its excessive complexity. In order to meet its design goals H&K had designed a weapon that was extremely complex, far more than AK-47 or M16 series weapons. If the M16 is about as complicated as a toaster, the G11 is more like a sewing machine, with layers of complicated machinery packed tightly together. While U.S. and Soviet assault rifles could be field stripped under wartime conditions for a quick cleaning, it was not advised to remove the G11’s internals under similar circumstances, as dirt would have easily fouled the weapon.

By 1990 the G11 was deemed ready for military service, and the West German Army was prepared to accept it as a replacement for the G3. The collapse of the Warsaw Pact however and the beginning of the unification process that merged West and East Germany into a single state put the adoption on hold. Not only was war now extremely unlikely, but the new German government suddenly had more important things to pay for than assault rifles. Heckler and Koch went into receivership and was later absorbed by British Aerospace. The company inevitably produced a true replacement for the G3, the G36, but work on the G11 was suspended and the weapon has been in limbo ever since.

The ideas the G11 brought to the table, particularly the caseless round, live on in small arms research and development today. The U.S. Army is preparing to switch to a new design in 6.8-millimeter, and the service requires a forty percent reduction in ammunition weight, something that could only be achieved using a caseless ammunition design. The G11 was one design way ahead of its time.

Kyle Mizokami is a defense and national-security writer based in San Francisco who has appeared in the Diplomat, Foreign Policy, War is Boring and the Daily Beast. In 2009 he co-founded the defense and security blog Japan Security Watch. You can follow him on Twitter: @KyleMizokami. This first appeared in November 2018.