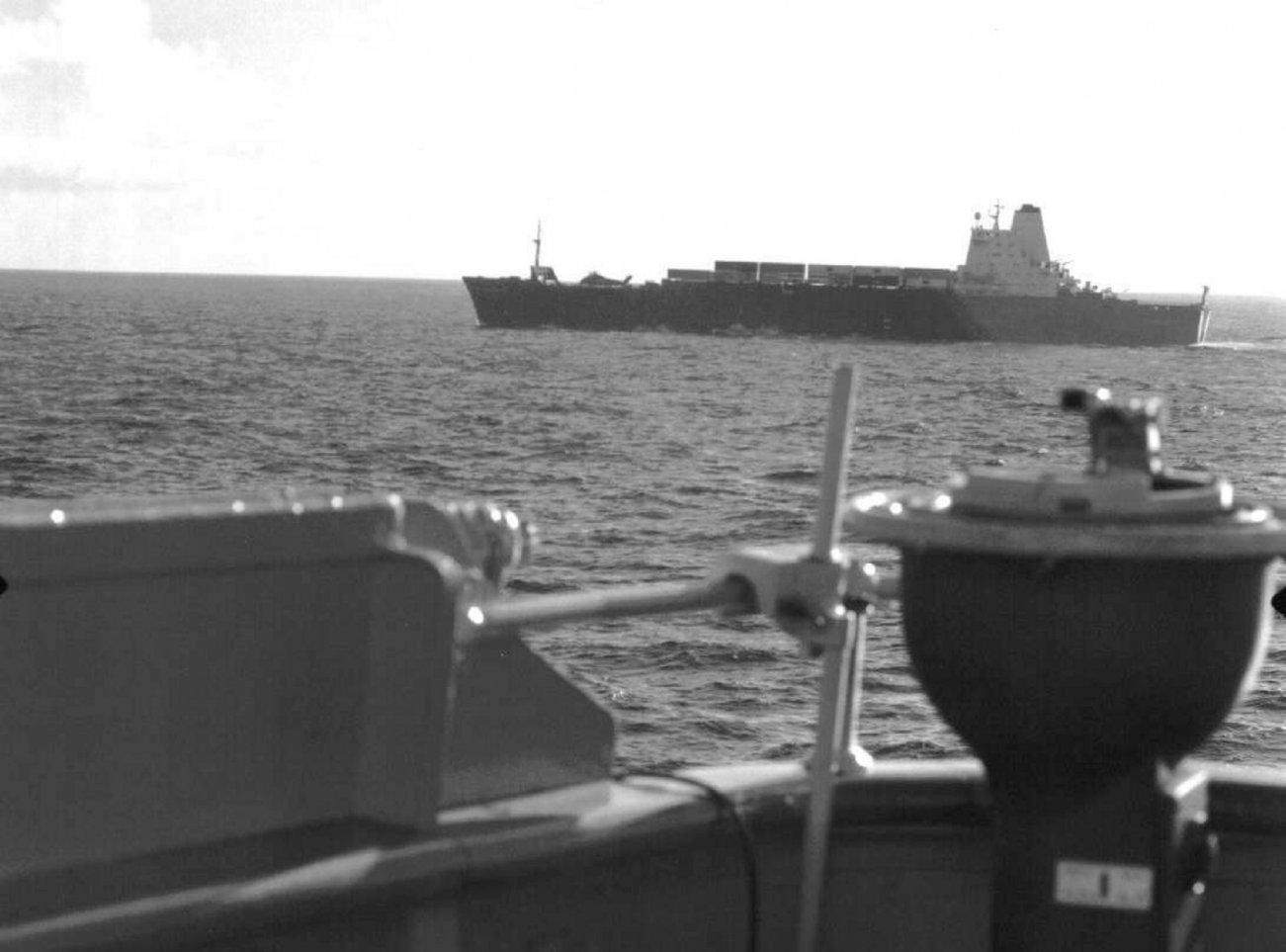 The Conveyor received only limited modifications, as she was intended more for delivery rather than sustained flight operation.

Here’s What You Need To Remember: Just as World War II carriers were often employed to transport land-based fighters across oceans, the Conveyor’s main job was to ferry Royal Air Force ground-based Harriers for delivery to the Hermes and Invincible.

The Royal Navy in 1982 faced a galling problem as it prepared to take back the Falkland Islands from Argentinian forces that had seized it that March: not enough aircraft carriers.

These were needed to launch air strikes on Argentinian forces on the islands, to deploy helicopters to patrol for Argentinian submarines and land troops and supplies, and launch jets to intercept attack by the Argentinian land-based fighters certain to swarm the British task force.

The Royal Navy could muster only eight Sea Harrier jump jets and twelve Sea King helicopters on the carrier Invincible—which had been on the verge of being sold to Australia!—and another twelve Sea Harriers and twenty Sea Kings on the larger Hermes.

However, on April 14 the Royal Navy had commandeered a fifteen-thousand-ton G2-class roll-on-roll-off container ship named Atlantic Conveyor that measured longer than two football field as a Ships-Taken-Up-From-Trade (STUFT). Just as early U.S. and British escort carriers during World War II were converted from civilian ships, the Conveyor was to be converted into impromptu aircraft carriers laden with helicopters and Harrier jump jets that didn’t require a long carrier deck.

The Conveyor received only limited modifications, as she was intended more for delivery rather than sustained flight operation. Just as World War II carriers were often employed to transport land-based fighters across oceans, the Conveyor’s main job was to ferry Royal Air Force ground-based Harriers for delivery to the Hermes and Invincible.

In any case, after undergoing nine days of conversion at Devonport, Atlantic Conveyor put out to sea on April 25 under her snowy-bearded Captain Ian North. From Ascension Island she took on eight Royal Navy Sea Harriers from 809 Squadron and six usually ground-based Royal Air Force Harrier GR.3s hastily modified to carry Sidewinder air-to-air missiles to serve in air defense roles.

She also carried six Wessex helicopters and four RAF HC-1 Chinook helicopters recently imported from the United States. Her hold was also stuffed full of missiles, cluster bombs, mortar shells and aviation fuel, as well as vital generators and aviation fueling systems. Most of her aircraft were sealed in plastic ‘banana wraps’ for protection from the elements, but at least one Harrier was kept on alert for takeoff to respond to intercept any approaching Argentine aircraft.

Meanwhile, on May 5 sistership Atlantic Causeway was also commandeered and more extensively modified with an aviation refueling system and hangar structure built on her deck.

Both impromptu carriers lacked a critical feature: an aircraft carrier’s extensive air-search radars and long- and short-range air defense systems. Fitting these onto either vessel was apparently considered inappropriate due to their theoretically civilian status, and might have imposed significant delays.

The Atlantic Conveyor arrived near the Falklands on May 19 and delivered her fourteen Harriers to reinforce the Hermes and Invincible, while taking on a Lynx anti-submarine helicopter.

The Conveyor’s helicopters were being readied to join ground forces on May 26. Her Chinooks, in particular, were considered a key element for a planned airborne landing by British commandoes. Their detached rotor blades had been assembled at sea in preparation for the mission.

However, on May 25 two Argentinian Super Etendard jets came skimming at low altitude towards the British task force from the northwest after having been refueled by a KC-130 tanker.

Closing within twenty-three miles, the pilots popped up to a higher altitude and turned on their Agave targeting radars only to pick up the British fleet. They hastily launched their Exocet anti-ship missiles and then belted for home.

The Ambuscade picked up the missile launch and hastily launched a cloud chaff to decoy the missile away from its position. These mis-directed missiles were programmed to home in on the largest nearby target available upon losing contact, and they did—the humongous Conveyor.

Though Captain North tried maneuvering to present the ship’s less vulnerable stern as target, there was little more he could do lacking radar warning systems or close defense weapons. At least one—but most likely two—missiles slammed into her port side C deck. The explosion caused ammunition and fuel stores to detonate, causing an uncontrollable fire to break out, killing at least three crew members. Prince Andrew, flying a Sea King helicopter at the time from Hermes, recalled seeing “splashes in the water about a quarter of a mile away” caused by flying debris.

Not being a warship, the Conveyor lacked the elaborate architecture and damage control resources to survive that kind of damage. A half-hour later Captain North signaled the abandon ship. A massive three-hour long rescue effort involving multiple helicopters and the destroyer HMS Alacrity managed to evacuate 137 civilian and military personnel. One of the Sea King helicopters to respond was flown by Prince Andrew. Tragically, North and eight others perished at sea before they could be rescued.

The utterly scorched Conveyer remained afloat, and an effort was undertaken to tow the zombified vessel. However, on May 28, she finally succumbed to her structural damage and sank beneath the waves.

Of the Conveyor’s embarked helicopters, only a single Wessex and Chinook named Bravo November remained, having been aloft during the air attack. A planned airborne landing at Mount Kent was canceled, and British troops were forced to advance on foot instead. Bravo November, meanwhile, remained heavily employed transporting over 2,100 troops and prisoners during the campaign, and transporting up to three 105-millimeter howitzers at time for the troops on the island. The Chinook sole-survivor would retain its legendary status for future combat actions in Iraq and Afghanistan, and remains in service to this day.

The Conveyor’s fate did not deter her sistership Atlantic Causeway from entering the theater on May 27. While she transferred her helicopters ashore the following day, she remained in theater and was soon landing choppers bearing wounded personnel from Round Table-class landing ships Tristram and Galahad after they were struck by Argentinian bombs. Though supposedly a delivery vessel, the Causeway ended up receiving more than four thousand helicopters landings.

Causeway finally retired from the theater June 17 and was returned to civilian service, before being scrapped four years later.

Sébastien Roblin holds a master’s degree in conflict resolution from Georgetown University and served as a university instructor for the Peace Corps in China. He has also worked in education, editing, and refugee resettlement in France and the United States. He currently writes on security and military history for War Is Boring. This article first appeared several years ago.