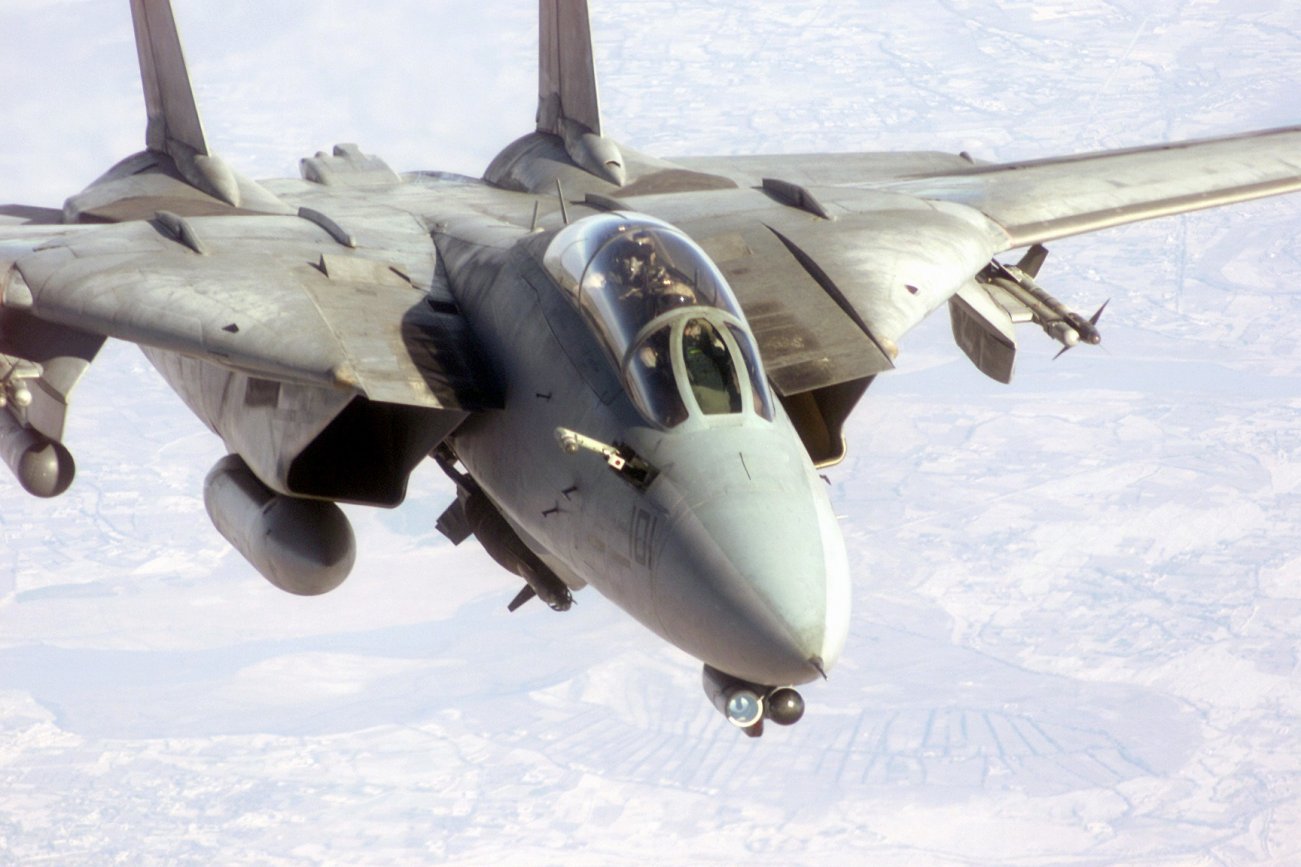 Ever watch the 1986 classic film Top Gun? This is that jetfighter.

What You Need to Know: The F-14 Tomcat is far more than just some aerial movie star in your favorite 80s flick–it was a beast in the air.

Long before being immortalized through its role in the 1986 classic film Top Gun, the F-14 Tomcat made a name for itself as a “true workhorse of naval aviation.”

The F-14 was preceded by the ill-fated Tactical Fighter Experimental (TFX) program, in part an effort by Defense Secretary Robert McNamara to procure a joint fighter for the Navy and Air Force. The resulting F-11B suffered from landing and weight problems, failing to satisfy the Navy’s need for a carrier-based interceptor. The F-11B project was finally aborted in 1968, and the Navy got a green light to procure a fighter more tailored to its specific needs. The F-14 grew out of the Navy’s search for long-range interceptors to run support for US strike groups, particularly against such Soviet bombers as the Tu-22 and Tu-22M, as well as some of the more agile entries in the Mikoyan MiG catalogue. Grumman Corporation was awarded a contract to build a two-seat, twin-engine fighter with a dual air superiority/carrier-based interceptor role. As explained in a remarkably insightful lecture given by Northrop Grumman VP Mike Ciminera, the lessons from the F-11’s many failures figured prominently into making F-14 the formidable plane that it became.

The F-14 Tomcat brought numerous improvements over the Navy’s older F-4 Phantom II. Learning from the poor combat record of early F-4 variants during the Vietnam War, the F-14 featured an integrated M61 Vulcan cannon. The F-14’s variable-sweep wings allow it to sustain top speeds approaching 2.4 mach, a core naval requirement for adequate performance in certain interception scenarios. The F-14’s smarter airframe construction brings a host of aerodynamic benefits over the F-4, including faster climb and improved stability—in sum, the F-14 is a markedly agile fighter that was more comfortable going toe-to-toe with its Soviet MiG counterparts.

The F-14’s forward-thinking aerodynamic design is complemented by a sophisticated targeting system that notably included the potent AN/AWG-9 radar, allowing it to simultaneously track up to 24 targets and engage as many as six targets with AIM-54 Phoenix long-range air-to-air missiles.

It’s difficult not to notice a distinct kind of elegance to the F-14’s design, one that the Phantom II sorely lacked.  “I like to compare the F-14 to a Harley-Davidson,” Cmdr. Aaron Cudnohufsky told the military publication Stars and Stripes. “There are a lot of airplanes out there. But none have the beauty and grace of the Tomcat. Every time I am in the aircraft, I am in awe. It looks fast just sitting there.” Master Chief Petty Officer Tom Gall offered a similar assessment: “The Tomcat just looks sharp. It’s mesmerizing to watch it fly. Especially as it sweeps its wings back and goes in for the kill. I’m quite certain that many people will miss it when it is gone.”

As beloved as the Tomcat is among U.S. servicemen, the most successful F-14 operator was Jalil Zandi—an Iranian pilot who used the Tomcat to devastating effect during the Iran-Iraq war, downing as many as eleven Iraqi aircraft.

The latest F-14D variant was eventually retired in 2006, but remains markedly faster than the F/A-18E/F Super Hornet that replaced it. Years before Top Gun enshrined the Tomcat’s name in the annals of military aviation pop culture, the F-14 distinguished itself as a versatile workhorse fighter that offered its pilots an experience unlike any other.

This piece was first published earlier this month and is being reprinted due to reader interest.