A group of nine European states have pledged to deliver more arms to Ukraine in its war with Russia, saying they would send main battle tanks, heavy artillery, air defence, ammunition and infantry fighting vehicles.

The countries that issued the statement from Estonia, calling it the Tallinn Pledge, said they would urge other allies to contribute to the package at a meeting in Ramstein, Germany.

Below are highlights from the statement that listed existing and planned contributions from some of the nations in the group:

Denmark will continue to train Ukrainian forces, including but not limited to the UK-led Operation INTERFLEX. Denmark has donated or financed military aid worth close to 600 million euros. Weapons donations and military support will continue in close cooperation with allies and in accordance with Ukrainian needs.

The Czech Republic said it was working with its defence industry to increase production capacities to provide more support, especially in producing large calibre ammunition, howitzers and armoured personnel carriers (APCs). A key component will be maintenance of already delivered equipment.

The Estonian package consists of tens of 155 mm FH-70 and 122 mm D-30 howitzers, thousands of rounds of 155 mm artillery ammunition, support vehicles for artillery units, hundreds of Carl-Gustaf M2 anti-tank grenade launchers with ammunition. Estonia will continue to provide both basic and specialist training to hundreds of Ukrainian Armed Forces members in 2023.

The new Lithuanian package consists of dozens of L-70 anti-aircraft guns with tens of thousands of ammunition, and two Mi-8 helicopters, with a total replacement value of 85 million euros. In 2023, Lithuania will invest 40 million euros for procurement to support Ukraine’s military. This will include anti-drones, optics, thermo-visual devices and drones. In addition, 2 million euros will be transferred to the UK International Fund to finance heavy weaponry acquisitions projects such as artillery systems and ammunition, direct fire platforms or armoured fighting vehicles. The total value of Lithuania’s upcoming package is 125 million euros.

In addition to the heavy equipment donated, Slovakia will continue intensive discussions with allies to unlock further equipment donations, now focused on main battle tanks, infantry fighting vehicles, air defence systems. It also includes increased production of howitzers, demining equipment and ammunition. Details are being developed based on exchanges with allies and partners.

Britain’s accelerated package consists of a squadron of Challenger 2 tanks with armoured recovery and repair vehicles, AS90 self-propelled 155mm guns, hundreds more armoured and protected vehicles, a manoeuvre support package that includes minefield breaching and bridging capabilities, dozens more uncrewed aerial systems to support Ukrainian artillery and another 100,000 artillery rounds. It also includes hundreds more sophisticated missiles including GMLRS rockets, Starstreak air defence missiles and medium range air defence missiles, 600 Brimstone anti-tank munitions and an equipment support package of spares to refurbish up to a hundred Ukrainian tanks and infantry fighting vehicles. The package is further augmented by continuing basic training and junior leadership training in Britain with 9 International partners, with the aim of training about a further 20,000 personnel in 2023. 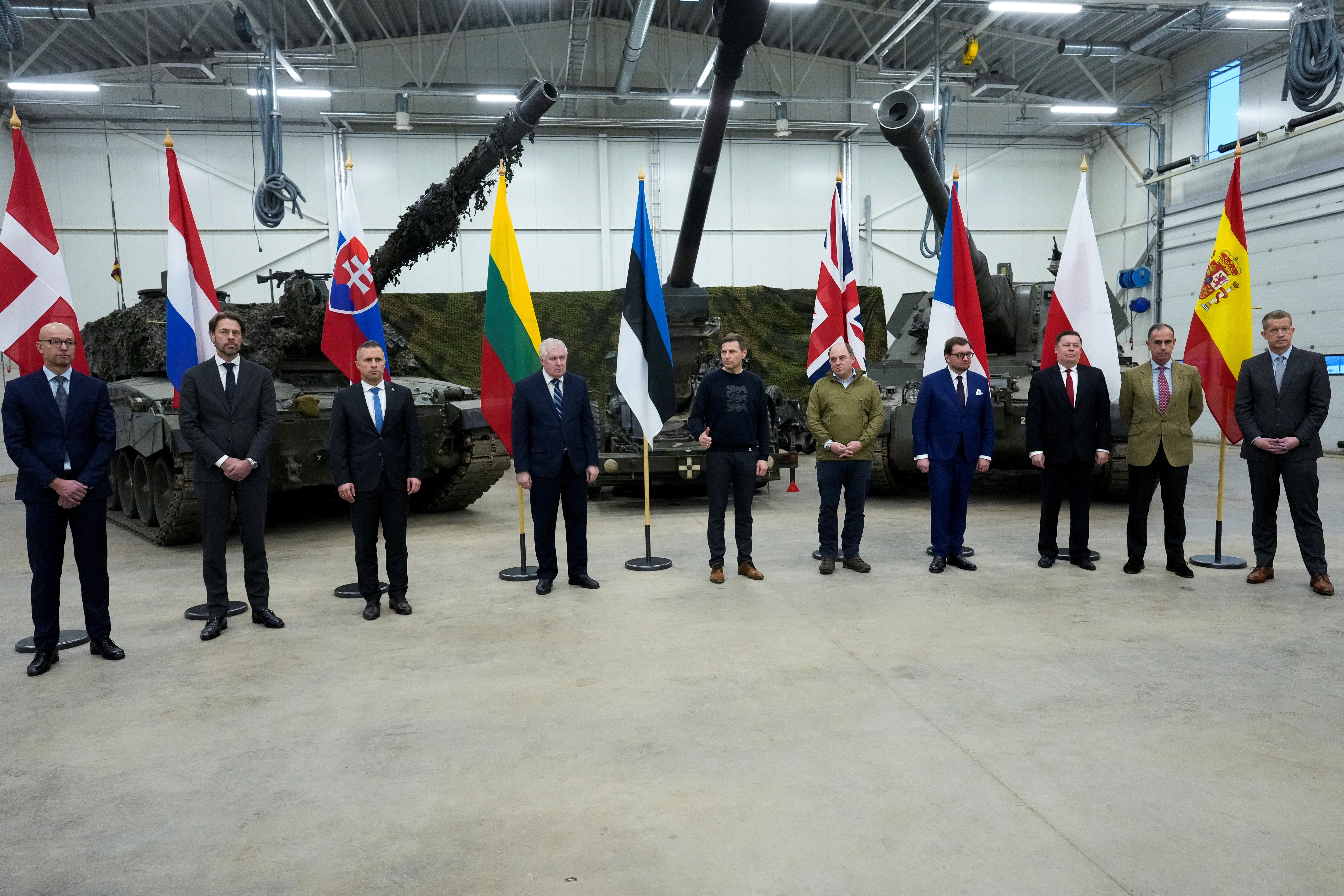 British Secretary of State for Defence Ben Wallace, Baltic defence ministers and representatives from other NATO members pose for a picture in Tapa Army Base, Estonia, January 19, 2023. REUTERS/Ints Kalnins 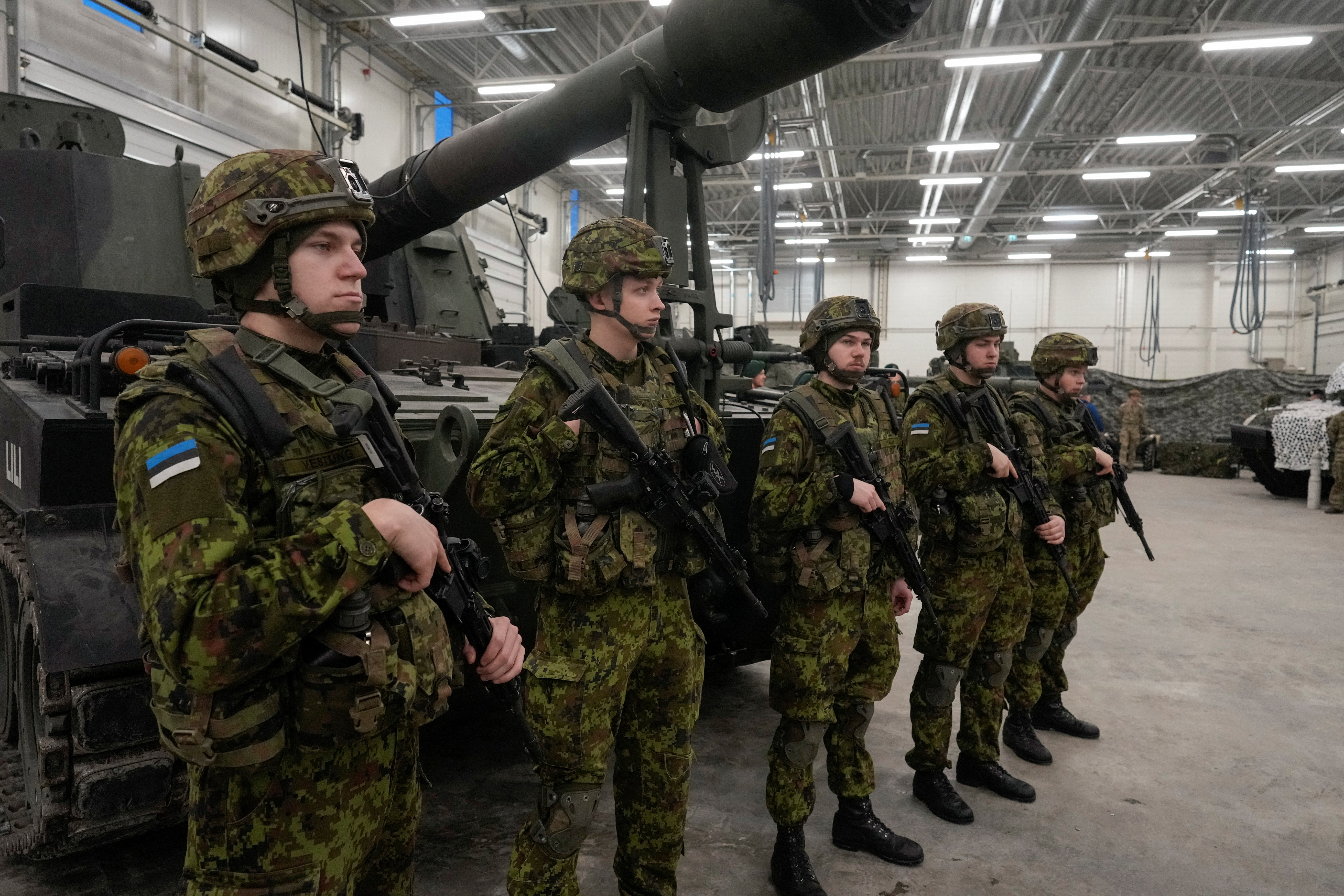 Estonian NATO troops stand in line during a news conference of British Secretary of State for Defence Ben Wallace, Baltic defence ministers and representatives from other NATO members in Tapa Army Base, Estonia, January 19, 2023. REUTERS/Ints Kalnins