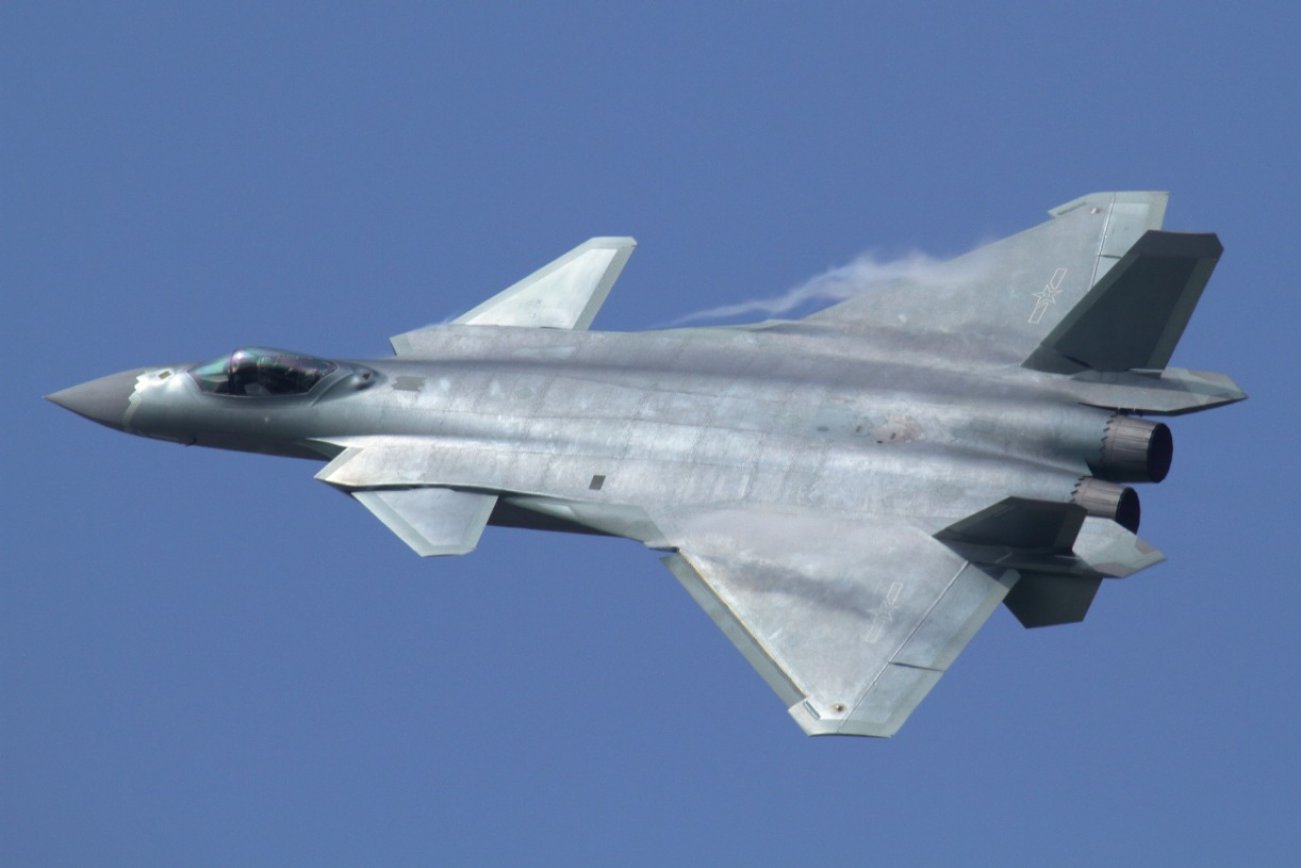 U.S. cinema has had a major influence on what the Chinese public views as the trappings of modernity.

Here’s What You Need to Remember: The script’s greatest problem, however, is its unwillingness to portray any serious flaws in its hyper-patriotic heroes. Most good military films explore the tension between the mechanistic obedience and composure under stress demanded by military organizations, versus natural human emotional responses, individualism and idealism.

Top Gun is legendary for its glamorous, rock-and-roll-fueled depiction of U.S. Navy fighter pilots. Of course, it was also a triumph in nationalistic propaganda which quintupled naval aviator recruitment the following year.

In October 2017, Chinese director Li Chen took a crack at making a Chinese Top Gun—and like the Bruckheimer original, his Sky Hunter was made in close cooperation with the military.

U.S. cinema has had a major influence on what the Chinese public views as the trappings of modernity. Thus, recent military blockbusters like Wolf Warrior 2 mark a distinct departure from low-budget TV series depicting scrappy Communist revolutionaries pitted against more heavily armed foreign invaders and Kuomintang forces.  In the new films, the People’s Liberation Army is portrayed as a technologically advanced force with global reach—just like the U.S. military.

So, Li’s patriotic jet fighter flick is a fascinating mirror to the United State’s own nationalistic impulses—despite cultural in-jokes such as the Chinese predilection for selfie-sticks.

Sky Hunter, admittedly, isn’t especially well-done military propaganda. and performed modestly at the box office in 2017. The cuts from scene to scene are often sloppy, and its driving need to highlight PLA heroism undermines pacing with ponderous patriotic pontificating.

But it’s interesting for two reasons. First, you get to watch China’s best new jet fighters engage in campy dogfights and canyon runs—mostly CGI creations, but real PLA aircraft show up on occasion. Second, it documents how Chinese military aviation wants itself to be perceived by its own citizens. The screenplay was even written by Lt. Col. Zhang Yi, a PLA officer!

As it happens, subtitled copies of Sky Hunter are not difficult to find on Youtube. So in this spoiler-ridden review of the film, we’ll go spotting for aircraft—and political subtexts.

Most of the planet defines territorial waters and airspace as extending no further than 12 nautical miles from a country’s shores. Beijing, however, insists its dominion extends to waters hundreds of miles southeast of the mainland (map here). Washington defies these claims by flying maritime patrol planes in these sectors, so the PLA ritually dispatches fighters to intercept them and sternly advise they bug out.

Wu and Liu then mock dogfight a pair of Super Hornets in a scene that liberally quotes the opening of Top Gun, sometimes shot-for-shot. Though rival air forcse are occasionally known to do this in peacetime, close-range dogfighting may likely be supplanted in a real conflict by beyond-visual range engagements where stealth, sensors and long-range missiles dominate. The Shenyang J-11 fighters in this scene are indeed magnificently maneuverable aircraft reverse-engineered from Russian Su-27 Flankers.

Recommended: What Will the Sixth-Generation Jet Fighter Look Like?

Recommended: Imagine a U.S. Air Force That Never Built the B-52 Bomber

Afterwards, at a graduation ceremony, Wu and Liu reunite with elite helicopter pilot Zhao Yali (Fan Bing Bing, debatably the most famous contemporary Chinese actress). The PLAAF inducted its first female pilots in the 1950s, decades before the U.S. Air Force, but kept them confined to a transport unit until around the year 2000. Since then, China’s growing contingent of female combat aviators has been prominently featured in the press.

Wu and Zhao go on to join an elite Chinese military unit, while Liu becomes a flight instructor in the neighboring country of ‘Maobhu’—a thinly veiled amalgam of Kazakhstan (in terms of ethnicity and Soviet-style uniforms) and Pakistan (in terms of its military alliance with China and political instability.) Inevitably, an extremist religious cult—a thinly veiled allusion to Islamist insurgents—seizes the airbase he’s is working at, taking Liu and other Chinese nationals hostage, as well as capturing a nuclear ballistic missile silo. Ironically, it seems both China and America fear exactly such a scenario taking place in Pakistan!

The hostage-taker’s bearded leader, Colonel Rahman (Tomer Oz) actually tells Liu he admires the ‘compassionate and peaceful’ People’s Republic of China, but has it in for his own government.  He does, however, question whether the PLA, which has “fought no wars in decades” has the stuff to defeat his thuggish forces.  “Are you guys even ready?”

These are platforms and capabilities the PLAAF mostly lacked twenty years ago—though in some cases, the relevant assets remain few in number today.  For example, China has only a few dozen aerial refueling tankers compared to the U.S.’s five hundred. Significant portions of the PLA continue to operate outdated systems like the 1950’s-era Type 59 tanks and J-7 jetfighters, but the growing proportions of modernized units give the PLA options suitable for expeditionary missions.

Wu Di pilots a new J-10C Vigorous Dragon, an agile, single-engine multi-role fighter similar in concept to the light-weight F-16. Curiously, despite a fly-by of a large Chengdu J-20 stealth fighter during a training sequence, it is not actually employed when the Chinese planners look for a way to elude terrorist-operated SA-6 ‘Kub’ surface-to-air missile batteries.

Beijing has long maintained that Western military intervention on humanitarian grounds is merely a cover for opportunistic imperialism. By this philosophy, as long as you are a sovereign government, then what you do to maintain internal control is beyond criticism. Thus, the military intervention in the film is carefully justified as solely to protect Chinese nationals and soil from harm, and as being authorized by the incompetent Maobu government.

The script’s greatest problem, however, is its unwillingness to portray any serious flaws in its hyper-patriotic heroes.  Most good military films explore the tension between the mechanistic obedience and composure under stress demanded by military organizations, versus natural human emotional responses, individualism and idealism. But in Sky Hunter, the heroes never enter real conflict, and their emotions never impedes the performance of their duty.

Sure, characters in the film repeatedly question whether Wu Di’s may be emotionally compromised—but he never is, never screws up, and so has little in the way of a character arc.

The film concludes somewhat ridiculously with hero and villain literally flying side by side in jet fighters exchanging jibes in stilted English (“You don’t have the power to be a pilot now!”)  Along with the abundance of action-movie clichés, there are a few amusingly improbable bits of derring-do involving sonic booms and blind landings.

There’s a sad postscript to the film evocative of the current zeitgeist in the Middle Kingdom. Though actress Fan Bing Bing reportedly performed in Sky Hunter unpaid, in 2018 a website alleged she had received secret additional payments from producers for others films she was involved with to avoid paying taxes. She has since disappeared since July 2018, and her name erased from various websites. Outlets that have reported her detainment have invariably ‘retracted’ their stories.

Hollywood celebrities too, of course, get into all kinds of mischief—but in China, movie stars are considered accountable to the state. For example, Jackie Chan was compelled to virtually disown his son after he was busted for possessing marijuana. In Bing Bing’s case, either her exposure for a reportedly widespread form of corruption—or perhaps her framing for some obscure political slight—likely led to her being ‘disappeared’, at least temporarily.

Sky Hunter isn’t good enough to be a hit, and it wasn’t.  But it is a product revealing of the aspirations and rhetoric of China’s modernizing armed forces—and an excuse to watch cool jet fighters dueling over the Himalayas.

Sébastien Roblin holds a master’s degree in conflict resolution from Georgetown University and served as a university instructor for the Peace Corps in China. He has also worked in education, editing, and refugee resettlement in France and the United States. He currently writes on security and military history for War Is Boring. This article first appeared three years ago and is being republished due to reader interest.