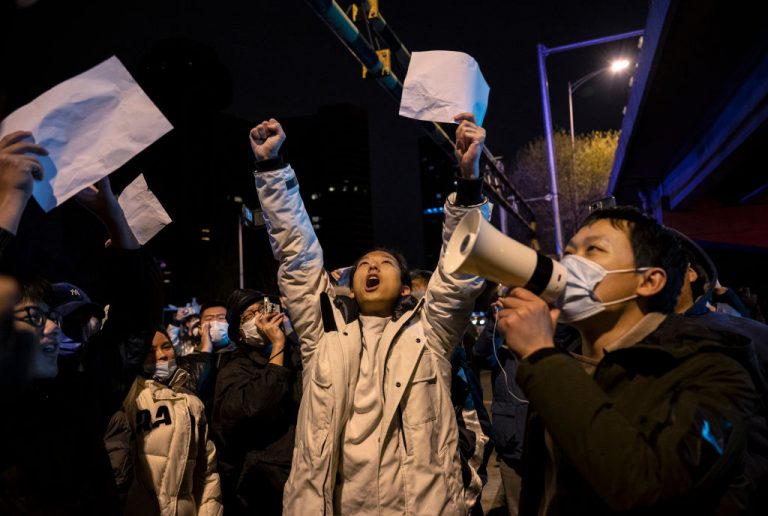 Chinese authorities responded Monday to a weekend of unprecedented protests against the regime for its excessive COVID-19 restrictions by loosening its “zero COVID” strategy.

Crowds of people frustrated with the Communist Party’s ongoing and severe pandemic regulations gathered in eight cities, including Beijing and Shanghai, starting Friday. Protesters on Sunday called for President Xi Jinping to step down, the biggest display of opposition to the CCP in decades, the Associated Press reported. In response, Chinese authorities eased some restrictions—likely an attempt to quell anger—but stood by its larger COVID protocols.

Crowds dispersed by Monday in Beijing and Shanghai as Hong Kong residents joined the protest, according to AP:

With police out in force on Monday, there was no word of protests in Beijing or Shanghai. But about 50 students sang at the Chinese University of Hong Kong and some lit candles in a show of support for those in mainland cities who demonstrated against restrictions that have confined millions of people to their homes. Hiding their faces to avoid official retaliation, the students chanted, “No PCR tests but freedom,” and “oppose dictatorship, don’t be slaves.”

The gathering and a similar one elsewhere in Hong Kong were the biggest protests there in more than a year under rules imposed to crush a pro-democracy movement in the territory, which is Chinese but has a separate legal system from the mainland.

Local authorities in Beijing said they would remove gates meant to block access to apartment complexes where infected residents quarantined, likely a response to a deadly fire which sparked the protests. Other cities announced some markets and businesses could reopen as well as public transportation.

China’s COVID cases are currently at 40,000 per day, the majority of which are asymptomatic cases, according to AP.