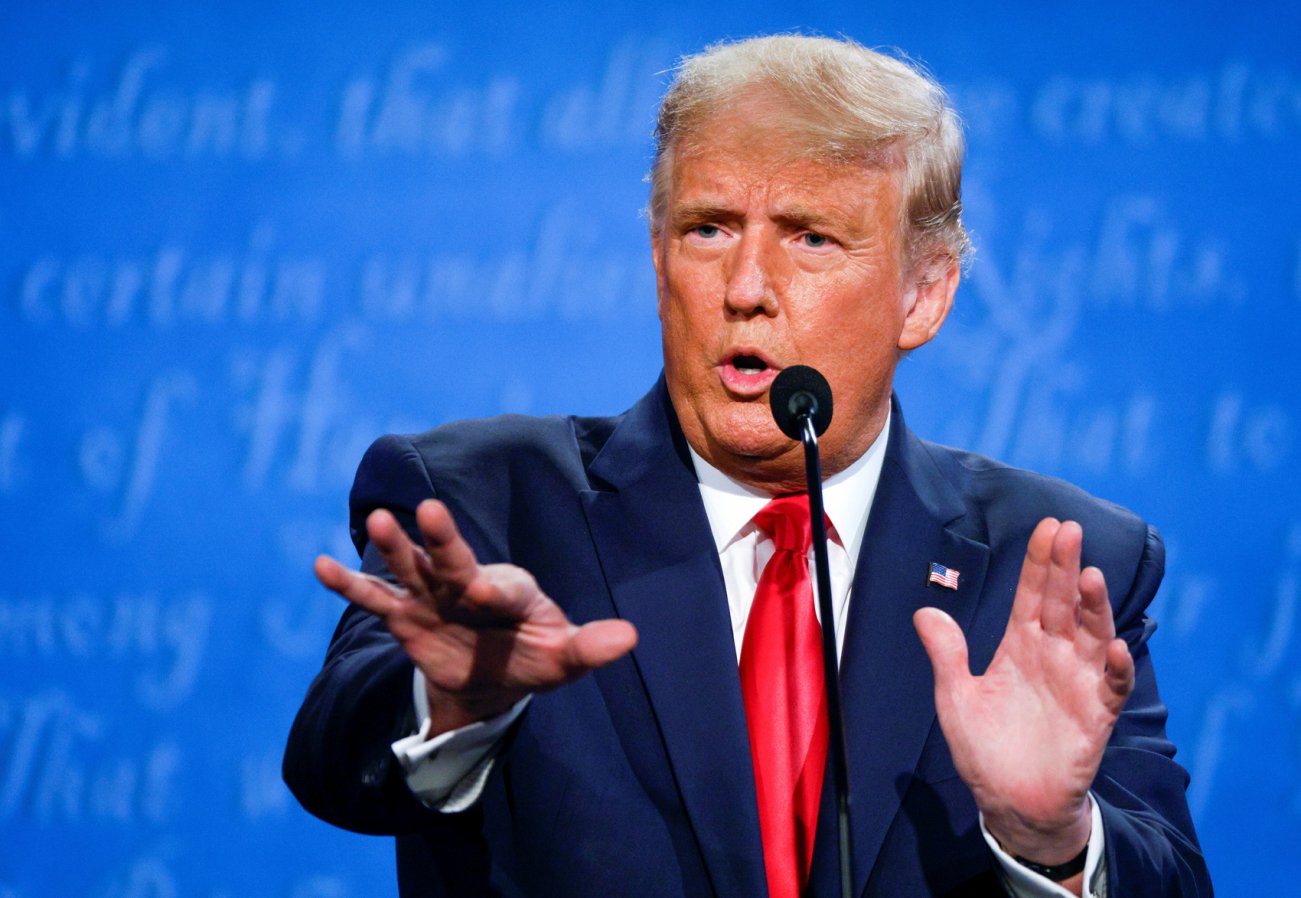 The last four years of the Trump administration have cast a long shadow over America’s political and diplomatic history. During that time, the State Department has substantially altered the credibility and generally positive perceptions of the United States around the world.

In a calculated appeal to the Indian and Indian-American Diaspora for support in his re-election campaign, President Donald Trump has dispatched two of his highest national security officials to New Delhi just days before the election. The timing of this trip, just days before the election, and taking place during which the world’s largest and most powerful democracies are having difficulty containing the coronavirus pandemic, underscores the gravity of this mission.

Both Secretary of State Mike Pompeo and Secretary of Defense Mark Esper have met with their counterparts in New Delhi, focusing largely on China. Pompeo said the purpose of their trip to India is to discuss “on how free nations can work together to thwart threats posed by the Chinese Communist Party” as he has championed the evangelical crusade against China and its partners like Iran. For Trump, using the anti-China message against his presidential opponent is part of his campaign strategy.

Arriving in New Delhi days earlier to lay the groundwork for the high-profile visit of two secretaries, Deputy Secretary of State Stephen Biegun acknowledged that India has a “strong and proud tradition of strategic autonomy” but pointed out that China is “an elephant in the room” in the evolving Indo-American engagement. Recognizing India’s military ties with Russia and commercial links with China, the White House strategists have combined the India visits with two clear objectives in mind:

2) to nudge New Delhi’s claim to be “non-aligned” and “autonomous” foreign policy to one more aligned with the United States.

Overall, the Trump White House has now taken the changing Indian geopolitical advantage over China after the recent military killing incident of Chinese and Indian soldiers in the disputed mountainous Himalayan Sino-Indian border. India has since banned over one hundred popular Chinese apps and restricted its bilateral relations with China while the tensions are still continuing with tens of thousands of Indian troops stationed on the northwestern Sino-Indian boundary.

The cabinet-level visits are the most consequential for the changing geopolitical landscape in the region as well as for the on-going “trade war” between China and the United States. Part of their stated agenda is the U.S.-India 2+2 Ministerial Dialogue, which will cover a number of issues of mutual interest—including military and security cooperation, defense information sharing, economic and trade cooperation, and working together with South and Southeast Asian countries. After the Indian trip, Pompeo is scheduled to visit other Indian Ocean nations to strengthen American bilateral relations. His visits include Sri Lanka, the Maldives, and Indonesia that have increasingly significant diplomatic and commercial ties with China.

Winning Battles but Losing the War

While these highly publicized visits will no doubt go some distance in shoring-up American interests, there are significant barriers to achieving the larger American objectives of these trips, not the least of which is the upcoming U.S. presidential election. The last four years of the Trump administration have cast a long shadow over America’s political and diplomatic history. During that time, Pompeo and his cabinet counterparts and associates have also substantially altered the credibility and generally positive perceptions of the United States around the world. Now the global community is watching to see if the tit-for-tat policies of the Trump administration will continue for another four years.

The world has witnessed a bewildering series of foreign policy swings from the Trump administration over the past four years. From Trump’s overturning U.S. sanctions on the Chinese telecommunications firm ZTE to help China, his falling in love with Kim Jong-un of North Korea, to deploying U.S. aircraft carriers through the South China Sea, it is virtually impossible to find a coherent and coordinated theme running through these policy decisions, much less anything that could be considered to be supporting strategic U.S. national interests.

Whoever wins the presidential election in November, however, it is likely that Trumpism will continue. Since the Trump administration has now set the consequential groundwork on being tough on China, anything a potential Biden-Harris administration does toward rapprochement or even a modus vivendi will be perceived by hawks in the United States as being weak on China.

While sending aircraft carriers through the South and East China Seas and the Strait of Taiwan may have a visceral effect—akin to a sugar high—of being tough on China, the stated long-term U.S. interests will hardly be well-served. The new administration must take a number of smart but concrete steps that work in unison to confront and compete with China.

First, the United States must take immediate steps to engage the world in a more constructive manner and improve the global perceptions of the American image. A combative foreign policy approach may appear to domestic audiences as fearlessly confronting any challenge from abroad. But it does not serve long-term national security interests as it is not much more than a fig leaf covering the absence of a strategy at all.

Harvard professor Joseph Nye, who served as assistant secretary of defense for international security affairs and deputy undersecretary of state, has long argued the importance of employing “soft power” as the greatest asset in America’s arsenal in global power: “Soft power is the ability to affect others to obtain the outcomes one wants through attraction and persuasion rather than coercion or payment. A country’s soft power rests on its resources of culture, values, and policies. A smart-power strategy combines hard- and soft-power resources.” One might think that this is obliquely referring to China. Yet, the policies of the past four years have resulted in negative views of both China and the United States across advanced economies, according to a public opinion survey in October by the nonpartisan Pew Research Center in Washington.

One of the first steps a new administration must need to take is to return to a strategy of global engagement through diplomacy by the State Department, one that has been largely gutted and demoralized. In a July report by the U.S. Senate Foreign Relations Committee, the Democrat staffers described how Pompeo has left “the department decimated and demoralized.”

The fact that Trump refers to the State Department as the “Deep State Department” makes unambiguous what he thinks of the profession of diplomacy—the frontline “soldiers” of war before the war. Yet, while aircraft carriers and tanks provide the tangible evidence of America’s power, military hardware only shows a single dimension of smart-power strategy. In no way does it guarantee that U.S. national interests will be any better served than American diplomacy. A classic analog to this narrative comes from the perceptive psychologist Abraham Maslow, who said, “if the only tool you have is a hammer, it is tempting to treat everything as though it were a nail.”

Second, the United States must initiate a global push to reframe China’s dollar diplomacy. Since its opening up in 1979 under Deng Xiaoping, China has accumulated great wealth over the decades. Beijing has been using that wealth not only to support its political agenda but also to buttress and legitimize China’s brand of authoritarianism. The United States cannot and should not try to compete with China in paying-off governments for support. Rather, Washington needs to help countries reject these financial incentives, reframe the issue, and create an appreciation for the corrosive effects these Faustian deals can have on their national governance and sovereignty. These financial incentives may serve the narrow interests of the autocrats, but they do not constitute a sustainable model for development.

This also points to the fact that the United States must get its own house in order. Given the handling of the coronavirus pandemic while denying science and evidence, the rampant racism, and increasing inequality, foreign audiences have virtually no justification for embracing America’s democratic ideals. To them, America is simply being hypocritical.

Third, the U.S. strategy must transcend its electoral cycles because U.S. interests transcend presidential elections. This is the reason why, after becoming the chairman of the U.S. Senate Foreign Relations Committee in 1947 at the start of the Cold War, Republican Sen. Arthur Vandenberg asserted that the country must stop “partisan politics at the water’s edge.” It was the bipartisan recognition that U.S. interests abroad should not be continually swung by the vicissitudes of domestic politics, special interests, and foreign influence. But recently it has become increasingly difficult to separate foreign from domestic politics, particularly with a widening partisan divide over America’s continuing wars abroad, fueled by the ongoing “culture war” underwritten by conservative evangelical cohorts and corporate interests.

These are made all the worse by the fact that foreign leaders are hardly willing to engage a president at the end of a four-year term, knowing that they could be facing a new president in January. Even if elected to a second-term, foreign leaders will ask themselves at the end of the second-term, why they should bother with a lame-duck president, realizing they will definitely be dealing with someone else in the near future. Foreign leaders must have clear assurance that American—neither Democrat nor Republican—foreign policy will not radically change from one administration to the next.

Keeping Up with American Values

To begin moving toward an effective strategy in dealing with China, the United States needs to make some significant policy changes, focusing on America’s authentic values embedded in its founding documents and traditions. It must start with the bipartisanship that is sorely needed to address these overdue issues, especially working with a democratic India over an autocratic China.

As Vandenberg counseled to leave behind “partisan politics at the water’s edge,” then Senators Joseph Biden and Richard Lugar have clearly demonstrated the possibility of coming together to uphold American traditions and values. In fact, four former Republican staffers noted in a recent op-ed, “from 2003 through 2006, Lugar was chairman [of the Senate Foreign Relations Committee], while Biden was ranking member. They flipped roles in 2007 when Democrats won control of the Senate. Despite major policy differences between Lugar and Biden and the typical rivalry between their staffs, there never was a moment when we doubted that Biden’s main objective as an elected official was the well-being of the United States.”

In America, it is still possible for Democrat and Republican leaders to craft a bipartisan foreign policy with national interests in mind “to form a more perfect Union” as the Preamble to the U.S. Constitution demands.

Dr. Patrick Mendis, a former American diplomat and a military professor, is a Taiwan fellow of the Ministry of Foreign Affairs of the Republic of China and a distinguished visiting professor of global affairs at the National Chengchi University as well as a senior fellow of the Taiwan Center for Security Studies in Taipei.

Joey Wang is a defense analyst in the United States. They are alumni of the Kennedy School of Government at Harvard University. The views expressed in this analysis neither represent the official positions of the current or past institutional affiliations nor the respective governments.