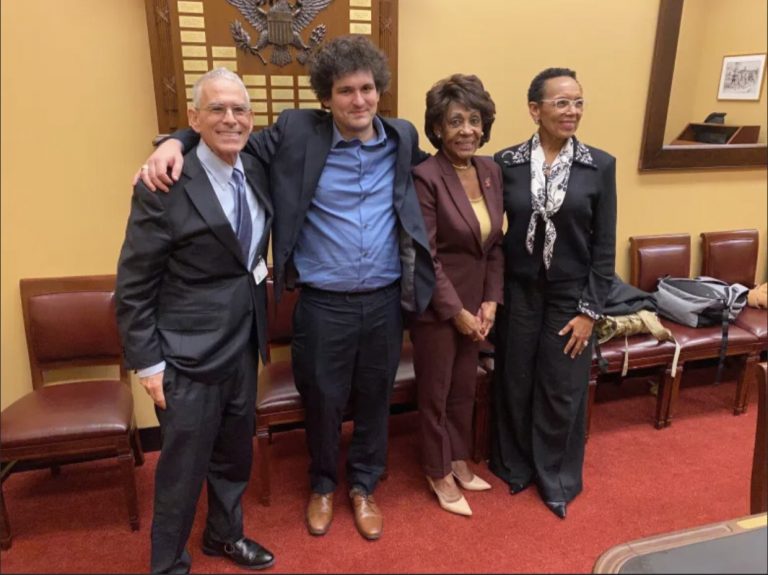 Sam Bankman-Fried and executives at his cryptocurrency firm contributed hundreds of thousands of dollars to members of the House committee that will hold hearings next month on the company’s collapse.

Bankman-Fried and his co-founders at FTX contributed $300,351 to nine members of the House Financial Services Committee, according to Federal Election Commission records. Some of the largest contributions were to Democrats on the committee’s Digital Assets Working Group, which worked on regulation of the crypto industry. Rep. Maxine Waters (D., Calif.), who chairs the committee, announced a probe this week into FTX’s collapse after the company declared bankruptcy, wiping out billions of dollars in customers’ portfolios. The Justice Department and Securities Exchange Commission are reportedly investigating Bankman-Fried for potential misuse of customer funds.

Bankman-Fried’s donations to committee members could raise concerns that the lawmakers will not adequately investigate the crypto kingpin, who spent millions on advertising, lobbying, and philanthropic causes to burnish his company’s image as an ethical crypto company in an industry rife with scam artists. Of the nine committee members who received contributions from Bankman-Fried, only Rep. Chuy Garcia (D., Ill.) has said he would return a $2,900 contribution from the billionaire. While Waters said the committee will investigate FTX’s “collapse,” the Democrat has no apparent plans to look into Bankman-Fried’s efforts to buy favor in Washington.

Waters dodged questions this week about whether she is concerned about Bankman-Fried’s political donations. “Well, I don’t want to get into that. As a matter of fact, both sides, Democrats and Republicans, have received donations,” she told Fox Business.

While Bankman-Fried has donated to Republicans, more than 95 percent of his contributions have gone to Democrats and Democratic committees. Along with top FTX executives, he contributed to seven Democrats and two Republicans on the Financial Services committee. They gave to five members of the committee’s Digital Assets Working Group, which Waters launched last year to “support responsible innovation that protects consumers and investors” and to craft regulations for the industry. To date, the Digital Assets Working Group has not proposed regulations for the industry, which some lawmakers say would have blunted the impact of FTX’s bankruptcy on its customers.

Bankman-Fried and his brother Gabriel gave $40,300 in all to Torres’s campaign and two of his political committees, the Torres Victory Fund and La Bamba PAC. Bankman-Fried and the head of FTX’s regulatory division gave $16,600 to Gottheimer, while other Bankman-Fried associates contributed $500 to Himes and $9,100 to Casten.

Casten has another link to the embattled crypto titan. Gabriel Bankman-Fried, who directs his brother’s political outreach, worked as a congressional aide for Casten until last year. He visited the White House on March 7 along with an adviser to the Democracy Alliance, the progressive network funded by Democratic billionaire donors.

His intensive lobbying campaign appeared to pay off before his company’s demise. He supported legislation proposed by Sen. Debbie Stabenow (D., Mich.) and Sen. John Boozman (R., Ark.) that would have subjected the crypto industry to regulation by the Commodity Futures Trading Commission, not the larger and aggressive Securities and Exchange Commission.

The donations secured him White House meetings and appearances earlier this year at Democrats’ annual retreat in Philadelphia. Bankman-Fried visited the White House three times this year with lobbyists from his company, the Washington Free Beacon reported. They met on April 22 and May 12 with Steve Ricchetti, one of Biden’s closest advisers. Bankman-Fried testified before the House Financial Services Committee on Dec. 7, where he said his goal in starting FTX was to “have a positive impact around the world.” He appeared on a panel with Waters at the Democratic retreat in Philadelphia in March and was photographed arm-in-arm with the committee chairwoman after the event.

Waters’s office did not respond to questions about Bankman-Fried’s donations to committee members.