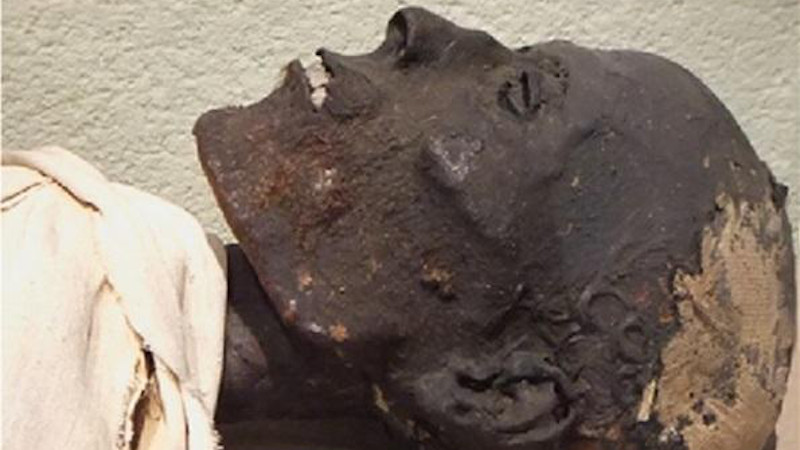 Ancient Egyptian mummies have many tales to tell, but unlocking their secrets without destroying delicate remains is challenging. Now, researchers reporting in ACS’ Analytical Chemistry have found a non-destructive way to analyze bitumen — the compound that gives mummies their dark color — in Ancient Egyptian embalming materials.

The method provides clues to the bitumen’s geographic origin and, in one experiment, revealed that a mummy in a French museum could have been partially restored, likely by collectors.

The embalming material used by Ancient Egyptians was a complex mixture of natural compounds such as sugar gum, beeswax, fats, coniferous resins and variable amounts of bitumen. Also known as asphalt or tar, bitumen is a black, highly viscous form of petroleum that arises primarily from fossilized algae and plants.

Researchers have used various techniques to analyze Ancient Egyptian embalming materials, but they typically require preparation and separation steps that destroy the sample. Charles Dutoit, Didier Gourier and colleagues wondered if they could use a non-destructive technique called electron paramagnetic resonance (EPR) to detect two components of bitumen formed during the decomposition of photosynthetic life: vanadyl porphyrins and carbonaceous radicals, which could provide information on the presence, origin and processing of bitumen in the embalming material.

The researchers obtained samples of black matter from an Ancient Egyptian sarcophagus (or coffin), two human mummies and four animal mummies (all from 744-30 B.C.), which they analyzed by EPR and compared to reference bitumen samples. The team discovered that the relative amounts of vanadyl compounds and carbonaceous radicals could differentiate between bitumen of marine origin (such as from the Dead Sea) and land-plant origin (from a tar pit).

Also, they detected vanadyl compounds that likely formed from reactions between the vanadyl porphyrins and other embalming components. Intriguingly, the black matter taken from a human mummy acquired by a French museum in 1837 didn’t contain any of these compounds, and it was very rich in bitumen. This mummy could have been partially restored with pure bitumen, probably by a private collector to fetch a higher price before the museum acquired it, the researchers say.