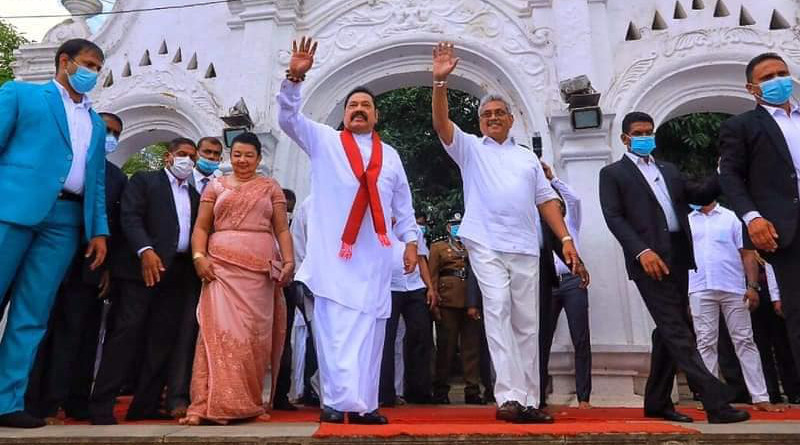 It is just a little over a year since Gotabaya Rajapaksa took over as Executive President of Sri Lanka with ambitious  plans for his country. A former military man and the top-most official in the Ministry of Defense from 2005 to 2015, Gotabaya Rajapaksa was to bring order to a government which had been torn apart by an unceasing conflict between President Maithripala Sirisena and Prime Minister Ranil Wickremesinghe.

The consequences of this struggle had been far reaching for the economy and security of the country.

The pro-West Wickremesinghe regime put on hold China-funded projects initiated by the previous Mahinda Rajapaksa government. A delay of a year and a half raised project costs. Government talked a lot about grand development schemes but failed to walk the talk. About a dozen MoUs signed with India were gathering dust. Gotabaya Rajapaksa inherited a non-functioning government and a stagnant cash-strapped economy.

There was also a conspicuous lack of vigilance on the security front. With the result, Islamic terrorists killed 259 people in Colombo and elsewhere on April 21, 2019 Easter Sunday. The bombing of three Catholic churches and post-bombing anti-Muslim riots accentuated an already existing division between the Muslims and other religious communities.

Thus, 2020 was marked by a consolidation of the majority Sinhala-Buddhists against the minority Tamils and Muslims.

Reversing Mahinda Rajapaksa’s policy of not bowing to the West on the politically sensitive war crimes issue, Wickremesinghe’s government agreed to co-sponsor a resolution against itself at the UN Human Rights Council (UNHRC) in Geneva in 2015. The resolution enjoined the government to set up accountability mechanisms which meant arraigning army “war heroes” before internationally supervised judicial mechanisms. Since the Sinhala-Buddhist majority community considered this an affront to their country and national pride, the successor government of Gotabaya Rajapaksa declared that it would withdraw its co-sponsorship in March 2021. This ensured that the Sinhala-Tamil divide continued in 2020.

Given US influence over the Wickremesinghe government, Colombo agreed to accept a grant of US$ 480 million under the Millennium Challenge Corporation (MCC) Compact for a project which included digitalization of rural land records to make land marketable. Government was also inclined to sign the Status of Forces Agreement (SOFA) with the US Department of Defense. Eventually, both the MCC and SOFA were buried by the successor nationalist government of Gotabaya Rajapaksa because both pacts ran counter to the constitution of Sri Lanka and abridge national sovereignty. US-Sri Lanka relations were therefore far from happy in 2020.

Despite the onset of COVID 19 in March 2020, President Gotabaya Rajapaksa held the parliamentary elections in August. The alliance led by his SLPP got a two thirds majority. Subsequently, he enhanced the power of the Executive Presidency by getting the 20th. Constitutional Amendment passed by parliament.

But all this did not enable the President to bring about the radical changes he envisaged because the economy had ground to a halt due to the COVID-19 pandemic. Lockdowns, restrictions on economic and public activity and the stoppage of tourism, crippled the economy.

In October 2020, the Central Bank of Sri Lanka (CBSL) reported that the economy had contracted by 1.6%  in the first quarter of 2020, year-on-year. Businesses had stopped and unemployment had risen. There was a decline in government revenue.

To counter these trends, the CBSL reduced policy rates and the Statutory Reserve Ratio (SRR) to inject liquidity into the market and lower borrowing costs significantly. Concessional credit schemes were introduced alongside debt moratoria. By August-September, the private sector showed a significant improvement.

The external sector, which was severely affected in the initial stages of the pandemic, eventually showed an improvement in the trade balance, a revival of workers’ remittances, a stable exchange rate, and a reasonable level of official reserves. External sector stability was supported by the restrictions placed on non-essential imports, the CBSL said.

Significantly, Sri Lanka met all its debt service obligations including the settlement of the International Sovereign Bond (ISB) that had matured in early October 2020. Meanwhile, subdued demand helped maintain inflation broadly within the target range of 4-6%. Economic growth is expected to rebound in 2021 with a vaccine coming to the country’s rescue in March.

However, the news on the political front was not very good for the SLPP. The party developed cracks. To offset any cross-voting, it had to get eight MPs from the opposition to enact the 20th Amendment.

Government Ministers, MPs and coalition partners were complaining about decisions being taken by the President’s Office without their knowledge. A coterie of non-politicians had surrounded the non-political President. Even Prime Minister Mahinda Rajapakda was sidelined.

There was heavy centralization of power in the President which meant that MPs had no freedom to decide on how to spend money in their electoral constituencies to keep up their political prospects. The Sri Lanka Freedom Party (SLFP), a key ally, had been threatening to quit.

Meanwhile, the alienation from the Muslims sharpened after they were denied their religious right to bury the bodies of fellow Muslims who had died of COVID-19 on the grounds that burial would pollute ground water.

On the foreign relations front, relations with China vastly improved in 2020. Beijing loosened its purse strings to give grants and Syndicated Loans. Unlike Project Loans, Syndicated Loans could be used for any purpose the Lankan government wished and that suited the Sri Lankan government. Other countries were reluctant to aid Sri Lanka which had been downgraded by the rating agencies.

In contrast to Western propaganda, Sri Lanka was not in a debt trap set by China as loans from China were only 10% of the total foreign debt of US$ 55 billion in 2019.  And Sri Lanka had met all its external debt repayment obligations in October 2020.

Nevertheless, Sri Lanka might borrow heavily from China in the future, according to economist Umesh Moramudali. Sri Lanka has to pay loan installments totaling US$ 6.3 billion in the next three years. The government may take Syndicated Loans from China to enable it to repay these loans, Moramudali wrote in The Diplomat.

As regards the relationship with India, the issue of implementing more than a dozen projects for which MOUs were signed in 2017 still remains. Sri Lanka wanted to back out of some,while India was complaining of non-cooperation from Sri Lanka. India, like the US, wanted to contain China’s influence on Sri Lanka, but its financial resources and organizational ability were inadequate.

However, India remains a major trading partner and investor in Sri Lanka. Bilateral trade between January and November 2019 amounted to US$ 4.19 billion. Of this, exports from India to Sri Lanka were worth US$ 3.49 billion. Sri Lanka’s grievance has been that India puts non-tariff barriers, nullifying gains accruing from the 2000 Free Trade Agreement. India is one of the largest investors in Sri Lanka. Investments have touched US$ 1.239 billion. India’s overall development assistance is close to US$ 3.45 billion, out of which around US$ 560 million are grants.

India is trying hard to get a stake in Colombo Port’s Eastern Container Terminal (ECT) but the Gotabaya government has been dragging its  feet due to pressure from nationalists. The matter is now before two committees.

India and the US wanted Sri Lanka to join the anti-China maritime alliance the “Quad” and also to go along with the US-India idea of freedom of navigation in the Indian Ocean. But Sri Lanka said that it would be neutral between the various competing powers and asked the US to subscribe to UNCLOS, the Law of the Sea.

*P. K. Balachandran is a senior Indian journalist working in Sri Lanka for local and international media and has been writing on South Asian issues for the past 21 years.

The article 2020 Was A Year Of Multiple Challenges For Sri Lanka – Analysis appeared first on Eurasia Review.