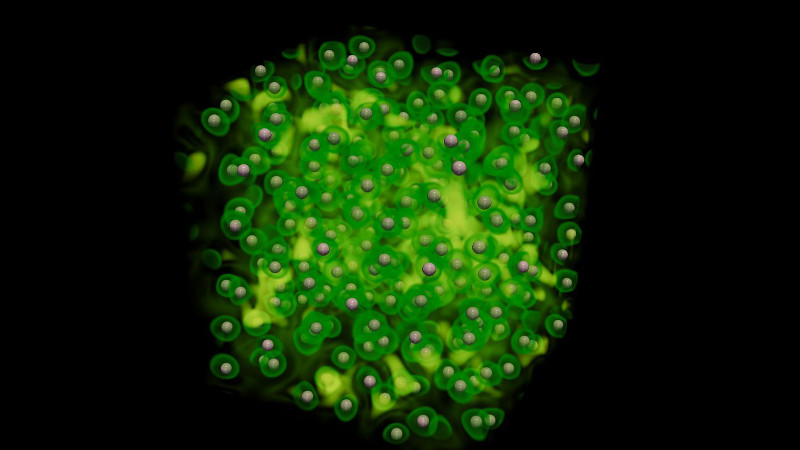 The study of warm dense matter helps us understand what is going on inside giant planets, brown dwarfs, and neutron stars. However, this state of matter, which exhibits properties of both solids and plasmas, does not occur naturally on Earth. It can be produced artificially in the lab using large X-ray experiments, albeit only at a small scale and for short periods of time.

Theoretical and numerical models are essential to evaluate these experiments, which are impossible to interpret without formulas, algorithms, and simulations. Scientists at the Center for Advanced Systems Understanding (CASUS) at the Helmholtz-Zentrum Dresden-Rossendorf (HZDR) have now developed a method to evaluate such experiments more effectively and faster than before.

Describing the exotic state of warm dense matter poses an extraordinary challenge to researchers. For one, common models of plasma physics cannot handle the high densities that are prevalent in this state. And for another, even models for condensed matter are no longer effective under the immense energies it entails.

A team around Dr. Tobias Dornheim, Dr. Attila Cangi, Kushal Ramakrishna, and Maximilian Böhme from CASUS in Görlitz are working on modeling such complex systems. Initial results were recently published in the journal Physical Review Letters. The team joined forces with Dr. Jan Vorberger from the Institute of Radiation Physics at HZDR and Prof. Shigenori Tanaka from Kobe University in Japan to develop a new method to calculate the properties of warm dense matter more efficiently and faster.

“With our algorithm, we can perform highly accurate calculations of the local field correction, which describes the interaction of electrons in warm dense matter and thus allows us to unlock its properties. We can use this calculation to model and interpret results in future X-ray scattering experiments, but also as a basis for other simulation methods. Our method helps determine the properties of warm dense matter, such as temperature and density, but also its conductivity for electric current or heat and many other characteristics,” Dornheim explains.

“The motivation behind our method is that we and many other researchers would like to know exactly how electrons behave under the influence of small perturbations, such as the effect of an X-ray beam. We can derive a formula for this, but it is too complex to be solved with pencil and paper. This is why we previously resorted to a certain simplification, which, however, failed to show some important physical effects. We have now introduced a correction that removes this very flaw,” Dornheim continues.

To implement it, they conducted computationally intense simulations over millions of processor hours on mainframe computers. Based on this data and with the help of analytical statistical methods, the scientists trained a neural network to numerically predict the interaction of electrons. The efficiency gains provided by the new tool depend on the particular application.

“In general, though, we can say that previous methods required thousands of processor hours to attain a high degree of accuracy, whereas our method takes mere seconds,” says Attila Cangi, who joined CASUS from Sandia National Laboratories in the United States. “So now we can perform the simulation on a laptop whereas we used to need a supercomputer.”

For the time being, the new code can only be used for electrons in metals, for example in experiments on aluminum. However, the researchers are already working on a code that can be applied more generally and that should deliver results for a wide variety of materials under very different conditions in the future.

“We want to incorporate our findings into a new code, which will be open source, unlike the current code, which is licensed and therefore difficult to adapt to new theoretical insights,” explains Maximilian Böhme, a doctoral student with CASUS who is collaborating on this with British plasma physicist Dave Chapman.

Such X-ray experiments to study warm dense matter are only possible at a handful of large laboratories, including the European XFEL near Hamburg, Germany, but also the Linear Coherent Light Source (LCLS) at the Stanford Linear Accelerator Center (SLAC) at Stanford University, the National Ignition Facility (NIF) at Lawrence Livermore National Laboratory, the Z Machine at Sandia National Laboratories, and the SPring-8 Angstrom Compact free electron LAser (SACLA) in Japan.

“We are in contact with these labs and expect to be able to be actively involved in the modeling of the experiments,” Tobias Dornheim reveals.

The first experiments at the Helmholtz International Beamline for Extreme Fields (HIBEF) at the European XFEL are already being prepared.