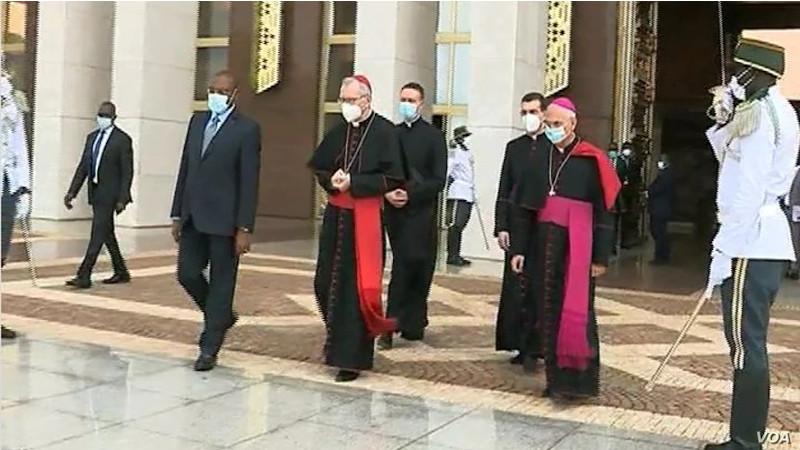 English-speaking Cameroonians have ignored calls by separatists to close their businesses and protest a visit by an envoy of the Roman Catholic Church. Cardinal Pietro Parolin called for reconciliation among disgruntled Cameroonians and their government, though separatists accuse the church of being indifferent to their plight.

Forty-three-year-old Roman Catholic Christina Anong says she turned out despite threats from separatists because she thinks her Church can help resolve the crisis. She says she wants Cardinal Parolin to ask Roman Catholics who are separatists, in the military or state officials to put down their guns so peace can return to the region.

The Roman Catholic Church in Cameroon says it has more than 6 million followers, with more than 2 million in the restive English-speaking northwest and southwest.

Before Cardinal Parolin arrived in Bamenda, separatist groups on social media asked all civilians to stay home and close their businesses to protest. They said the Roman Catholic Church has not condemned what they call atrocities committed by Cameroon troops in the English-speaking regions since the crisis began.

In several audio messages circulated on social media, the separatists said their fighters will arrest anyone who turns out to listen to Pope Francis’ envoy.

One of the audio messages said to be from the interim government of Ambazonia, the state in which English-speaking separatists are fighting to break away, describes the Roman Catholic clergy in Cameroon as insensitive to the sufferings of English speakers.

She says the Roman Catholic Church in Cameroon has failed to emulate clerics like the American Nobel Peace Prize winner Martin Luther King, who defended civil rights and fought injustice. She says all civilians should stay at home to let the world know that the Roman Catholic Church and Pope Francis have been indifferent to the killings in the English-speaking western regions. She says it is unfortunate the pope’s envoy met with Cameroon President Paul Biya instead of comforting victims of the separatist crisis caused by Biya.

Most businesses have remained open.

Chris Anu, who calls himself the secretary for communication of the interim government of Ambazonia, has acknowledged on social media that the interim government does not want the pope’s envoy in Bamenda. He said it will be useless for Cardinal Parolinto to visit Cameroon and listen only to government and Catholic clergy he describes as not being sincere.

The Roman Catholic Church, in a news release, said it has always stood for justice and encourages both separatists and the military to declare a cease-fire. The release said human lives and property should be preserved and that sincere dialogue should be opened by both parties in the conflict.

Cardinal Parolin says he told President Biya Friday that violence is not a solution to the separatist crisis.

“We touched the different points about conflicts, especially about the situation in the north and southwest of the country,” Parolin said. “What we are looking forward to is reconciliation and peace, especially in this present situation where there are many other crises starting from the COVID crisis. It is important to achieve peace. It is the only condition to grow and to achieve sustainable development everywhere.”

Deben Tchoffo, governor of the English-speaking northwest region that includes Bamenda, says Cameroon and the Vatican have the same vision for handling the crisis, but fighters should drop their weapons and be pardoned or be killed.

He says Pope Francis, through his envoy, Cardinal Pietro Parolin, supports and encourages President Paul Biya’s efforts to return peace to Cameroon’s English- speaking regions. He says his wish for the country is that all civilians, especially Christians, traditional rulers, the civil society and separatist fighters, obey and abide by the message of peace and reconciliation brought to Cameroon by the Vatican secretary of state.

During a mass Sunday in Bamenda, Cardinal Parolin will bestow the Pallium — a liturgical vestment from the pope that is a symbol of their participation in papal authority — on Cameroon Archbishop Andrew Nkea Fuanya. Some separatist groups have vowed to disrupt the ceremony. The government says it has deployed troops to protect civilians, the clergy and Cardinal Parolin.

Violence erupted in Cameroon’s English-speaking regions in 2017 when teachers and lawyers protested alleged discrimination by the French-speaking majority. The military reacted with a crackdown, and separatist groups took up weapons, claiming they were protecting civilians.