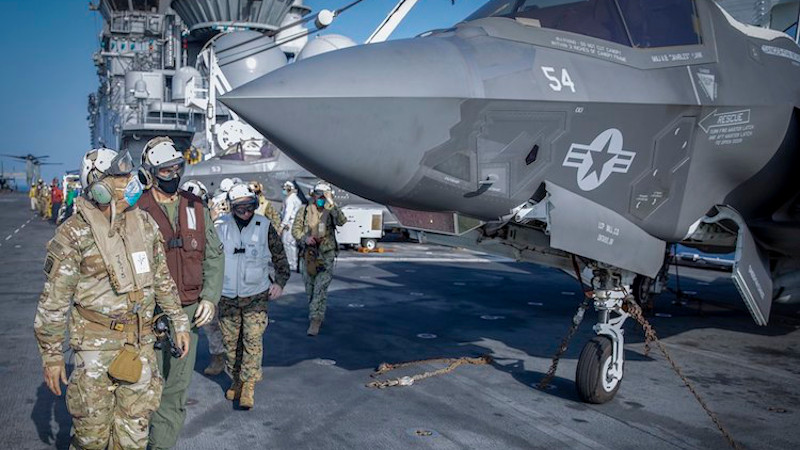 The lack of engagement with African countries economically, politically, and militarily could haunt the United States in the coming decades. Washington needs to forget the trauma of the infamous “Black Hawk Down” incident in Somalia and draft a new policy for mutually beneficial cooperation with African states. China, the European Union (EU), and Russia have been engaging with a great number of African countries while the United States watches from the sidelines.

The United States has an advantage over the EU in Africa because it does not carry the same colonial baggage. To make the most of this advantage, the Biden administration needs to focus on four essential elements: Sino-African relations, the expansion of Islamic extremism, the Russian footprint in Africa, and the conflict in the Horn of Africa.

Chinese economic, political, and military presence in Africa will increase in the coming decades. Beijing’s insatiable appetite for African natural resources has already brought it to the region. Beijing is betting on Africa’s economic development, and the future financial and political relationship between the two should concern the United States.

China has so far built one military base in Africa, in Djibouti in 2017, at the cost of $590 million. It is worth noting that the base is close to Camp Lemonnier, the United States Naval Expeditionary Base, and near Djibouti’s main port and the narrow Bab-el-Mandeb Strait.

By contrast, the United States’ trade with the entire African continent in 2017 was a meagre $39 billion. Biden’s administration has a window of opportunity to increase trade with Africa. The United States should acknowledge that it is playing catch up with China in Africa, and Washington’s priority should be to counteract Chinese influence in Africa with soft power.

Chinese economic engagement is politicized, with Beijing demanding any potential ally not recognize Taiwan as a sovereign country. With much success so far, Swaziland is the only country in Africa that recognizes Taiwan, while the rest of the African countries have succumbed to the Chinese political domino effect.

Moscow is coming back to Africa

During the Cold War, the Soviets trained, assisted, and armed African countries fighting colonization and solidified their ideology in Angola, Mozambique, Ethiopia, Somalia, Congo, Guinea-Bissau, and other countries battling for independence. Further, the Soviets built a campus in Moscow, Patrice Lumumba University, to educate and indoctrinate Africa’s future leaders.

Russia’s economic footprint in Africa lags behind China and the United States, but it is steadily increasing. Russian-African trade increased from $10 billion in 2010 to $20 billion in 2018. Having that said, it is not the economic relationship that should worry Washington, but Russian geopolitical ambitions in Africa. Moscow hosted the Russia-Africa summit in 2019. For the first time since the fall of the Soviet Union, Russia will have a military base in Africa – a naval base in Sudan near Port Sudan.

Russia cannot compete with China and the United States economically, but militarily it is making progress. Russian has naval ambitions not only in Sudan but also in Eritrea. Even though nothing has been formalized between Eritrea and Russia, Moscow has ambitions of building a logistical base in the Red Sea on the Eritrean coastline. Russia also deploys mercenaries to help certain African regimes maintain power and exert a paramilitary influence without heavy scrutiny.

Finally, Russia is developing infrastructure in key African regions. It already has oil and gas collaborations with the Republic of Congo, Equatorial Guinea, Morocco, and South Sudan, and it has preliminary agreements with Ethiopia to build a nuclear power plant.

Islamic terrorists such as Al-Shabaab in the east and Boko Haram in the west have not been eradicated yet, and new actors affiliated with ISIS and Al Qaeda are expanding in Sub-Saharan Africa.

The Horn of Africa is an unstable region. South Sudan, with a population of 11 million, ended its civil-war in 2018 with the Khartoum Declaration of Agreement. The civil war killed over 50,000 people and displaced millions, and there is no guarantee that the cease-fire between Kiir and Machar will last.

Ethiopia’s stability is a necessity for the region because if Ethiopia experiences anarchy, the Horn of Africa will follow suit, dragging a total of 116 million inhabitants into chaos.

Ethiopia’s current conflict between the TPLF, Tigray People Liberation Front,  and the central government prompted Ethiopia to withdraw its approximately 3,000 troops from Somalia, and this will have ramifications in the Horn of Africa and Somalia. Those forces were the primary actors fighting Al Shabaab, and therefore it will be a matter of time before Al Shabaab regains the territory they lost.

The Biden administration should be concerned because the current instability in Ethiopia has not been resolved. It will likely take a couple of years before a central authority in Addis Ababa can secure law and order in Ethiopia, and where does that leave Somalia and the presence of Al Shabaab in East Africa?

Suppose Ethiopia, with a population of 116 million, does not resolve its internal crisis quickly. In that case, there will be a major catastrophe waiting for the Horn of Africa.

According to Pentagon, the withdrawal of United States forces from Somalia was completed by January 17. The troops consisted of approximately 700 military personnel. The U.S. forces were an integral part of defeating Al-Shabaab and restoring stability and law and order in Somalia. The absence of U.S. troops will create a window of opportunity for Al Shabaab and other non-state actors affiliated with Al Qaeda and ISIS to be permanent actors in the region and conduct more terrorist attacks in the region.

Thus, with the troop withdrawal from Ethiopia’s 3,000 and the U.S.’s 700, it is an open letter invitation for Al-Shabaab to take over the country and establish their Islamic State. Somalia has gone back to square one, and the Horn of Africa will experience more terrorist attacks as a result.

Mozambique – The Presence of ISIS

Since 2017, Mozambique has been battling Ahlu-Sunnah Wa-Jama (ASWJ) —which the locals erroneously call “Al Shabaab.” So far, ASWJ has orchestrated over 357 attacks since 2017, and they are currently holding vast areas of the country, especially in the Cabo Delgado region and coastal towns.

In November of 2020 alone, ASWJ beheaded and dismembered over 50 people, and they routinely kidnap women and children, much like Boko Haram in Nigeria. Since the conflict started between the government of Mozambique and ASWJ in 2017, over 2,000 people have been killed and 300,000 internally displaced. In one instance, the ASWJ conducted beheadings of innocent people in a football stadium while shouting “Allahu Akbar.”

Africa is becoming a breeding ground for Sunni Islamic terrorist groups. If the Biden administration remains on the side-lines, various fragile countries in Africa will become another Mozambique, Somalia, or Nigeria.

American leadership is paramount, and Washington needs to develop a concrete military framework to assist African governments in their battle against Sunni Islamic non-state actors. Mozambique turned to Russia for assistance in their struggle against ASWJ and contracted the Wagner mercenaries.

The Crisis in the Horn of Africa – Ethiopia

As of this writing, the conflict between Abiy Ahmed and Tigray’s TPLF regime is winding down, but Ethiopia is still unstable. The Ethiopian government’s national troops currently occupy Mekelle, Tigray’s capital region and TPLF’s headquarters, but the conflict is still being waged in Tigray’s remote areas.  Abiy Ahmed may have won the battle in Tigray, but can he win the war in stabilizing Ethiopia?

Ethiopia is at a crossroads, and the ethnic animosity between the Oromos, Amhara, and Tigray could be a catalyst for instability in Ethiopia. There is no guarantee that the young Prime Minister – 2019 Nobel Peace Laureate – can restore a collective Ethiopian identity that can supersede Ethiopia’s significant and influential ethnic groups’ identity.

If Abiy Ahmed is not capable of quelling ethnic-based conflict in the second-most populous country in Africa, it could lead to Ethiopia’s disintegration.

The United States, under Biden’s administration, has an opportunity to emerge as a reliable partner with African countries. Washington’s leadership is needed and wanted. African nations are not anti-American; they are pro-American. Washington should not relinquish its influence in Africa to China, Russia, or Europe. To counteract Chinese presence and Russian influence in the region, the United States should adopt a comprehensive engagement policy.

The United States is playing catch up against Chinese economic and political influence; thus, Washington has a limited window of opportunity to act before the window is closed by Beijing’s soft and hard power. The United States has economic, political, and military assets to engage in Africa; will Washington engage?

* Daniel Haile is a graduate student at Texas A&M University, The Bush School of Government and Public Service. He is a Masters of International Affairs candidate. He previously wrote for The National Interest.

The article Biden Administration Has Opportunity To Emerge As Reliable Partner With African Countries – Analysis appeared first on Eurasia Review.