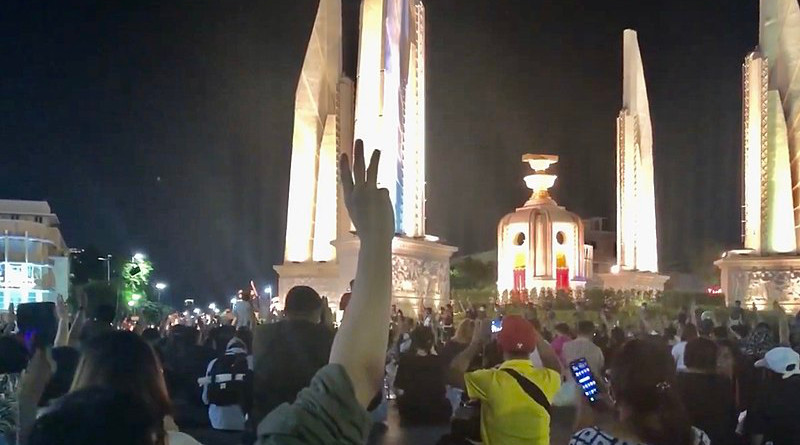 The largest political demonstration since the 2014 coup was in late 2019 when former Future Forward Party (FFP) leader Thanathorn Juangroongruangkit called a rally soon after Thailand’s regime-friendly Constitutional Court stripped him of his parliamentary seat. When the Constitutional Court dissolved the FFP on 21 February 2020, anti-regime rallies gathered pace.

Then came COVID-19. Until an outbreak in mid-December, Thailand had contained the virus, using a lockdown and curfews from March through June. When the restrictions were relaxed, rallies resumed. From July, there were non-stop rallies across the country, initially led by young students. They called for reform: that Prayuth step down; the constitution be revised; and, most controversially, the monarchy be brought under a new people’s constitution.

The protesters were innovative. They used social media platforms, sidestepping state controls, organising rallies at short notice, and bamboozling state authorities. They embraced diversity, advancing agendas and symbols challenging Thailand’s social and political conservatism. Rallies used cosplay, including Harry Potter themes and dinosaur outfits, and entertained crowds with bands, rappers and DJs. Conservative symbols have been given new meanings and the monarchy’s activities have been lampooned. Some rallies have been compered and led by young women, LGBTQI activists, high school students and the disabled.

Protesters embraced a version of Thai history founded on the principles of the 1932 revolutionary people’s constitution that rejects the military–monarchy narrative that exploits the masses and oppressively dominates the state, media and schools.

Facing large rallies, Prayuth stood firm. Constitutional reform was left to languish in a regime-dominated parliamentary committee and monarchy reform was resolutely rejected. The regime’s strategy was to arrest and harass the movement’s leaders.

What have the demonstrators achieved?

The regime and allied conservatives suggest that nothing has changed and that the demonstrations have lost steam and support. That view ignores the grand challenge posed to the monarchy and the scramble to ‘protect’ it. The protesters have changed the way that many view the monarchy.

At a 10 August rally, a young woman read out 10 demands of the monarchy, calling for democratic reform. The demands included no legal immunity, abolition of the lese majeste law, a return to government scrutiny of the monarch’s wealth and royal projects, a reduction in taxpayer-funded support for the monarchy and investigations of the enforced disappearances and murder of anti-monarchists. With the monarchy and regime ignoring these demands, there have been calls for a republic.

The demands for reform of the monarchy reflect the realisation that it has accumulated massive economic and political power. While earlier red shirt protesters were critical of the monarchy, they were stifled by the lese majeste law and state violence. This new generation of protesters have shown no fear of lese majeste law and pushed criticism to levels that most Thais could not have imagined possible.

As he has done for several years, the King spent most of 2020 in Germany or with Queen Suthida in Switzerland. He faced protests there, with calls for Germany to investigate his activities. Thai exiles created social media platforms lampooning the King. With demonstrations mounting in Bangkok, the King returned to Thailand in October. The visit got off to a rocky start when a limousine transporting Queen Suthida unaccountably got caught up with protesters who shouted insults.

The palace has been forced to mount a campaign to stabilise the King’s position. With the support of the regime, the royal family embarked on public relations push to have the King appear closer to his subjects. The royal family has engaged in celebrity-style walkabouts among loyalists. The King and Queen give special attention to ultra-royalists who oppose the protesters.

Along with social media ‘information operations’ directed by the palace and the army, the regime has used repressive laws to moderate the attacks on the monarchy. Thai Lawyers for Human Rights reported that from mid-July to early December, at least 220 people have faced charges, a number that is mounting by the day. Over 80 face charges related to the monarchy, including 35 facing lese majeste charges, even children.

Still, the demonstrators have changed the way that the monarchy is considered and discussed. Gone is rajasap — the honorific language reserved for the royal family — and protesters speak of Vajiralongkorn in low, rough terms. The barriers to discussing the monarchy in the media are beginning to fall away, with royal wealth, power, and republicanism reported in detail. The international media now recognises the King as a problem for Thailand’s political future.

The protesters have dismantled some 20th century Thai symbols and are challenging others. Yet they still face last century’s anti-democratic opponents: the crown and a staunchly royalist military. Next year promises to be another eventful one as Thailand’s youth continues to challenge royalist imperatives embedded in the past.