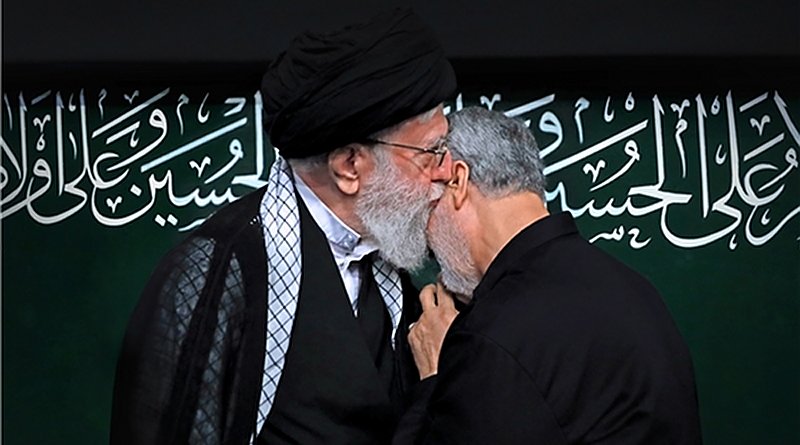 As the anniversary of the assassination of Qassim Soleimani approaches, tensions between Iran and the United States are rising.

On January 2 last year, Qassim Soleimani, the irreplaceable commander of IRGC’ Quds Force, was killed by a US Army drone strike near Baghdad airport. Although the Iranian regime retaliated by launching several missiles at the Ain al-Assad base a few days later, since the attack did not cause any casualties, the Iranian regime’s leaders are still talking about revenge. Last month when Mohsen Fakhrizadeh, the father of the regime’s nuclear energy was killed in a very complicated operation on the outskirts of Tehran. These two incidents have greatly highlighted the regime’s weakness among its own forces.

On Sunday, December 20, Assaeb Ahl Al-Haq militias affiliated with the Iranian regime by firing 21 rockets at the US Embassy in Baghdad, have raised tensions between the United States and Iran once again. The attack, of course, provoked an immediate reaction from US officials, and Donald Trump accused Iran of being involved in the attack by showing pictures of three unexploded rockets, warning that in an event of an attack in Iraq that would kill even one American, he will hold Iran accountable and react accordingly.

On December 23, the US Central Command (CENTCOM), blamed Assaeb Al-Haq militia for the rocket attacks on the US embassy in Baghdad’s Green Zone. However, in a fearful response, the Iranian Foreign Ministry called Iran’s involvement in the attack on US forces in Iraq “baseless and fabricated” and said that “the Islamic Republic of Iran holds the US government responsible for the consequences of any unwise action in the current situation.”

Following the attack, the Iraqi government announced the arrest of six Assaeb forces on charges of involvement in this rocket attack.

Following the arrests, several armed Assaeb Al-Haq militants gathered in front of the Iraqi Intelligence Agency building in Baghdad on Friday night, they announced a deadline and warned the Iraqi Prime Minister to release members of the group who are in detention.

On Iraqi social media on the evening of December 25, they posted a video in which they emphasized and threatened “divine punishment” for Iraqi Prime Minister Mustafa al-Kazemi. They gave the Iraqi government 48 hours to release the members of the militant group, who are detained on charges of participating in the rocket attack.

This situation is very inconvenient for Iraqi Prime Minister, Mustafa al-Kazemi. On the one hand, he informed Iraqi political figures that he was completely opposed to the release of those accused of the rocket attack and while condemning the threats of Assaeb militants, was waiting for the results of the investigation and the verdict of the judge.

On the other hand, if he confronts harshly the Assaeb forces, they will accuse him of the betrayal of the national independence of Iraq. Meanwhile, he believes the continuation of relations with the United States and Iran in the national interest of Iraq. He intends to pursue a policy to keep Iraq free of conflict and tension between the United States and Iran and that the territory of Iraq does not become a place for proxy warfare of the militant forces supported by the Islamic Republic of Iran with the United States.

The Assaeb Al-Haq militia, which is part of Hashd Al-Shaabi, is in turn part of the Iraqi security forces. The militants are led by Qais Khazali, a former US prisoner in Iraq. In the beginning, he was an ally of Muqtada al-Sadr. He broke up with him in 2004. After his release from prison, with the help of the Iranian regime, he formed Assaeb Al-Haq. This group is also linked to Lebanon’s Hezbollah, and has been sanctioned by the United States.

Meanwhile, Muqtada al-Sadr, the leader of the Sadr faction, who in the past has shown that he is an opportunist but affiliated with the Iranian regime, issued a statement on Friday evening calling Iraq a victim of the Iran-US conflict and demanded both countries, especially Iran that he called it “Dear Neighbor”, to get away their tensions from Iraq, and to respect the authority and sovereignty of Iraq.

They seem to think that with just three weeks to go before the end of Trump’s presidency, the United States will not act against them. We must wait and see how things will go during this period!