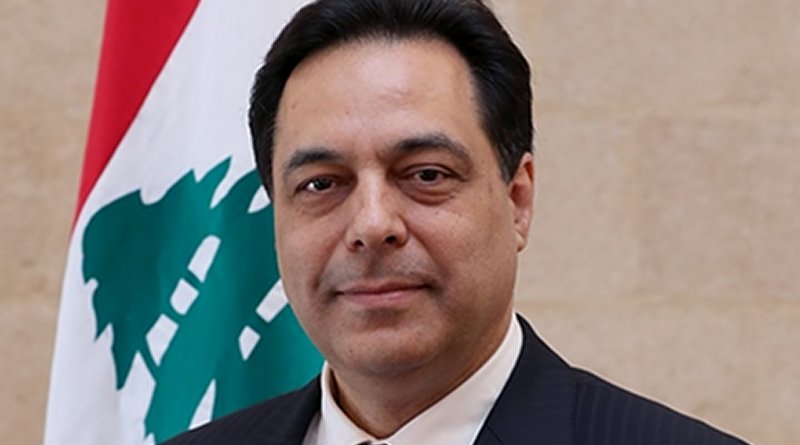 An FBI probe into the Aug. 4 explosion at the Beirut port found it was caused by 500 tons of ammonium nitrate, Lebanon’s caretaker Prime Minister Hassan Diab said on Tuesday.

Diab, who quit following the blast that killed more than 200 people and inflicted billions of dollars in damage, earlier said that more than 2,700 tons of ammonium nitrate had been stored at a port hangar for years.

Diab said he was surprised that “the security services, who were aware of the existence of 2,700 tons of ammonium nitrate in one of the hangars of the Beirut port, did not raise this issue during 20 sessions held by the Supreme Defense Council before the explosion took place on Aug. 4.”

He added: “From 2014 to the present day, none of the members of the Supreme Defense Council informed the Lebanese president, who is the head of the council, about the existence of this substance.”

Diab revealed in an interview after months of silence that “an opening was made in Hangar 12, where the ammonium nitrate was stored.”

He said: “The amount of ammonium nitrate that exploded was estimated by the FBI report to be 500 tons. Does anyone know when and who made an opening in Hangar 12? And where did the 2,200 tons go? Who is the owner of the ship that shipped it? And how did it enter the port of Beirut seven years ago? Who allowed it in? And who has been silent about that for so long?”

He added: “Did any Lebanese know what ‘ammonium nitrate’ means before Aug. 4? The first official report I received about the substance stored in the port was on July 22. I was informed of it through three different pieces of information over a period of two hours on June 3. I first received information from the security services by chance, informing me that there was 2,000 kg of explosives in the port, so I immediately requested to arrange a visit to the port on June 4.

“During the security preparations for my visit, it became clear that there was different information from what I first received — I was informed that it weighed 2,500 tons and not 2,000 kg and that it was not TNT but nitrate, which we did not know anything about. When we searched on the Internet, we found out that it is chemical fertilizer. The third piece of information I received was that this substance has been in the port for seven years and is not new, so I asked to complete the investigation to visit the port and find out more.”

He continued: “I received the report on July 22, and suppose I visited the port on June 4 and inspected Hangar 12, I would have sent a letter to the security officials who already knew about the matter for seven years. And if I had a feeling that there was danger in the port, I would have spoken immediately to the president, and I was not to cover this crime.”

Diab said that the charges issued against him by the judicial investigator of the Beirut port blast, Judge Fadi Sawan, have hurt him deeply. He said: “I came from the beginning to fight corruption but was deemed corrupt in the end because I did not visit the port.”

Meanwhile, the caretaker prime minister hinted that the country could go into full closure after New Year’s Eve, fearing an increase in the number of COVID-19 cases. He said that the number of cases to date is acceptable, adding that if there is an increase in infections arriving from abroad, flights will be suspended.

Diab announced his rejection of the removal of state subsidies for basic materials. However, he supported rationing “because the rich should not benefit from the subsidies that should only target the needy.”

He said: “I asked the governor of the Banque du Liban to provide the amount remaining at the bank for subsidies, and we heard from the media that we have $2 billion, which must suffice for at least six months until we find other solutions. I sent a suggestion to the parliament regarding the issuance of the financing card, and the decision must be shared by the caretaker government, Parliament, and the central bank.”

Diab pointed out that there is a complete system of corruption in Lebanon. “There is an interconnected political, financial, and economic system, and if the forensic audit uncovers the sources of corruption — as will happen in auditing the accounts of the Banque du Liban, then we can say that we are on the right judicial path, not by destroying public property, as happened on the street, which does not serve the revolution or the demands of the Lebanese people.”

Diab’s speech coincided with protests carried out by students of private universities on Bliss Street outside the campus of the American University of Beirut (AUB). The students protested the university’s decision to adopt the Lebanese banks’ dollar exchange rate, which is 3,900 Lebanese pounds, while the official price is 1,515 pounds, meaning that the tuition fees will more than double.

The angry students blocked Bliss Street for some time while riot police took security measures to protect the university. The protesters chanted “down with capitalism” and “the AUB has become military barracks.”