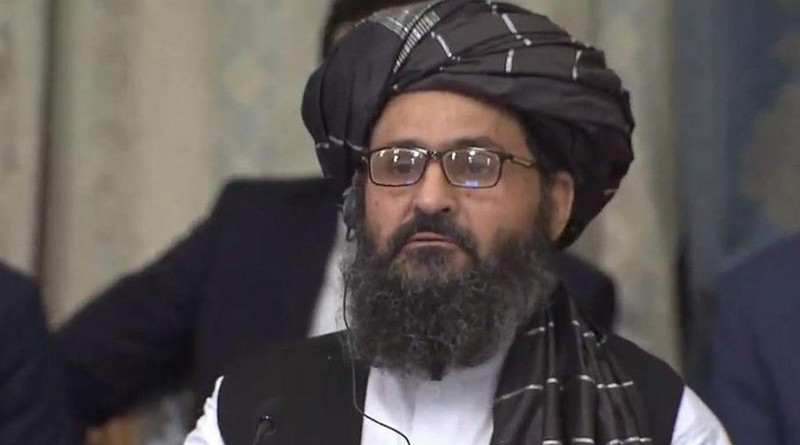 The Taliban on Friday said its February 2020 agreement with the United States is meant to give American “invading” troops a “safe passage” out of Afghanistan, insisting the insurgent group expects President Joe Biden administration’s “review” of the document will not disrupt it.

Sher Mohammad Abbas Stanikzai, the deputy Taliban peace negotiator, made the statement during an ongoing visit to Moscow, where his delegation is meeting with top Russian officials.

Stanikzai told a news conference that the Taliban signed the pact with a “legal, elected government in America” and the new U.S. administration reviewing it “is their “internal decision.” But it does not mean Washington is abandoning the treaty, he added.

“In the history of Afghanistan, no one ever gave a safe passage to foreign invading troops. So, this is a good chance for the Americans that we are giving them safe passage to go out according to this treaty. We hope that when they are reviewing it they will come to the same positive [conclusion],” Stanikzai stressed.

He also rejected as “completely false” allegations that the Taliban had received bounties from Russia for killing U.S. troops in Afghanistan.

“We do not need anyone to give us reward for the killing of Americans. Americans are the invaders and we are [have been] killing them since 2001,” Stanikzai said and stressed the need for Washington to stick to the mutually agreed troop withdrawal timeline.

When asked for reaction to Stanikzai’s statement, a Pentagon spokesperson told VOA that Washington continues to support the Afghan peace process.

“While prudent reviews of the U.S.-Taliban agreement and its associated provisions will occur, no decisions have been made regarding any future conditions-based force level revisions,” said Maj. Rob Lodewick.

Stanikzai led the Taliban team in talks with U.S. negotiators that lasted over 18 months and produced the landmark deal between the two adversaries to bring closure to the 19-year-old war in Afghanistan, America’s longest.

U.S. officials acknowledge the insurgents have not attacked American troops since the signing of the pact, which binds the Taliban to halt attacks on foreign forces.

The U.S.-Taliban agreement requires all American and NATO troops to leave the country by May in return for the insurgents’ counterterrorism guarantees and pledges they will negotiate with Afghan rivals a political deal to permanently end two decades of Afghan war.

“If they remain in Afghanistan after this [the agreed deadline] we will also kill them even if somebody reward us or do not reward us. We take our reward from God. We fight the invaders without a reward, without any bounty,” Stanikzai warned.

White House National Security Advisor Jake Sullivan said Friday that the Biden administration is “taking a hard look at the extent to which the Taliban are in fact complying” with key provisions of the deal.

“In that context, we will make decisions about our force posture and our diplomatic strategy going forward,” he told a virtual panel discussion hosted by the U.S. Institute of Peace.

The U.S.-initiated Feb. 29 accord opened direct talks between the Taliban and the Afghan government in September but the process has progressed slowly with both Afghan foes blaming the other for not being serious in moving the dialogue further.

Kabul has been demanding the Taliban declare a cease-fire for the talks to progress while the insurgents insist a political understanding must lead to its cessation of the conflict.

“Without them [the Taliban] meeting their commitments to renounce terrorism and to stop the violent attacks on the Afghan National Security Forces … it’s very hard to see a specific way forward for the negotiated settlement, but we’re still committed to that,” Pentagon spokesperson John Kirby told reporters on Thursday.

But Stanikza accused Washington of failing to meet their timelines outlined in the deal, such as removal of the names of Taliban leaders from a United Nations blacklist and release of all insurgent prisoners from Afghan jails.

He also accused the U.S.- backed Afghan government of President Ashraf Ghani of being “the only hurdle” in the way to finding a political settlement to the country’s long conflict.

Stanikzai went on to link peace in Afghanistan to Ghani relinquishing power.

Hours later, the Afghan president appeared to reject Stanikzai’s statement, saying he has “sworn to uphold the constitution.”

Participating in a virtual discussion Friday by the Aspen Institute, Ghani welcomed the Biden Administration’s decision to review the deal with the Taliban.

He said Washington was going to send a team to Kabul and “we will also be talking by video conferencing on how to energize the peace process …how to make sure that it meets its stated goal of an end state of a sovereign, democratic united Afghanistan.”

The Afghan president also cautioned that fears about collapse of his national security forces security in the wake of the U.S. military drawdown from the country “are not unfounded.”

“If Taliban realize they can prevail through violence, they will not let go,” Ghani said.

The U.S. reduced its troop levels in Afghanistan to 2,500 this month under the then-outgoing Trump administration and in line with the agreement with the Taliban, from nearly 13,000 a year ago.