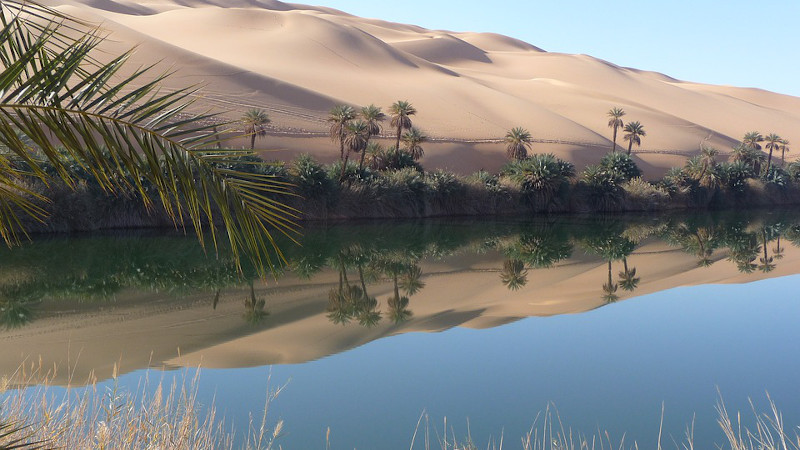 Large parts of today’s Sahara Desert were green thousands of years ago. Prehistoric engravings of giraffes and crocodiles testify to this, as does a stone-age cave painting in the desert that even shows swimming humans. However, these illustrations only provide a rough picture of the living conditions.

Recently, more detailed insights have been gained from sediment cores extracted from the Mediterranean Sea off the coast of Libya. An international research team examined these cores and discovered that the layers of the seafloor tell the story of major environmental changes in North Africa over the past 160,000 years. Cécile Blanchet of the German Research Centre for Geosciences GFZ and her colleagues from Germany, South Korea, the Netherlands and the USA report on this in the journal Nature Geoscience.

Together with the GEOMAR Helmholtz Centre for Ocean Research Kiel, a team of scientists organized a research cruise on the Dutch vessel Pelagia to the Gulf of Sirte in December 2011.

“We suspected that when the Sahara Desert was green, the rivers that are presently dry would have been active and would have brought particles into the Gulf of Sirte”, says lead author Cécile Blanchet. Such sediments would help to better understand the timing and circumstances for the reactivation of these rivers.

“One can imagine a giant hollow cylinder being pushed into the seafloor”, says co-author Anne Osborne from GEOMAR, who was onboard the research ship.

“The marine mud layers contain rock fragments and plant remains transported from the nearby African continent. They are also full of shells of microorganisms that grew in seawater. Together, these sediment particles can tell us the story of past climatic changes”, explains Blanchet.

“By combining the sediment analyses with results from our computer simulation, we can now precisely understand the climatic processes at work to explain the drastic changes in North African environments over the past 160,000 years”, adds co-author Tobias Friedrich from the University of Hawai’i.

From previous work, it was already known that several rivers episodically flowed across the region, which today is one of the driest areas on Earth. The team’s unprecedented reconstruction continuously covers the last 160,000 years. It offers a comprehensive picture of when and why there was sufficient rainfall in the Central Sahara to reactivate these rivers.

“We found that it is the slight changes in the Earth’s orbit and the waxing and waning of polar ice sheets that paced the alternation of humid phases with high precipitation and long periods of almost complete aridity”, explains Blanchet.

The fertile periods generally lasted five thousand years and humidity spread over North Africa up to the Mediterranean coast. For the people of that time, this resulted in drastic changes in living conditions, which probably led to large migratory movements in North Africa.

“With our work we have added some essential jigsaw pieces to the picture of past Saharan landscape changes that help to better understand human evolution and migration history”, says Blanchet. “The combination of sediment data with computer-simulation results was crucial to understand what controlled the past succession of humid and arid phases in North Africa. This is particularly important because it is expected that this region will experience intense droughts as a consequence of human-induced climate change.”