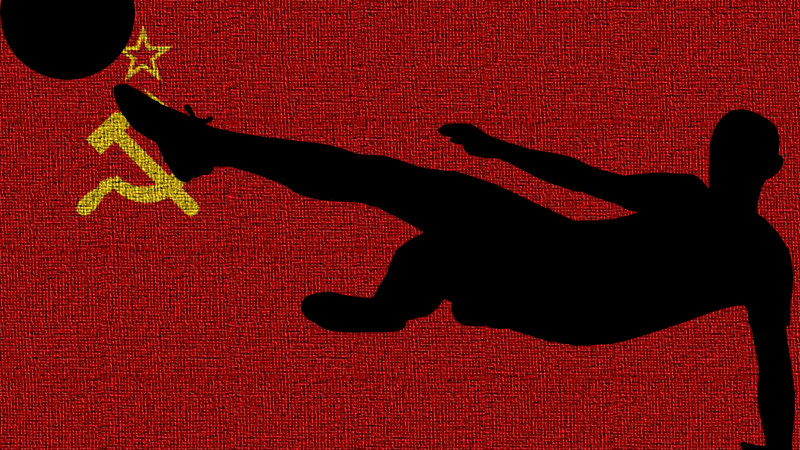 (RFE/RL) — Tens of millions of people were dead. Cities and towns lay in rubble months after the bloodiest conflict the world had ever known. With much of Europe still reeling from World War II, it hardly seemed the time for games.

But in November 1945, clubs from Great Britain, the cradle of the modern game of soccer, would host matches involving an unusual foe: Dynamo Moscow, champions of the Soviet Union.

Interest would be high as the Soviet Union still basked in the glow of the Allied victory over Nazi Germany and British fans were eager to get a peek of such an exotic opponent.

However, Cold War tensions were already percolating when Dynamo Moscow arrived, as Josef Stalin’s communist regime was occupying most of Eastern Europe. The tour would come months ahead of former Prime Minister Winston Churchill’s famous Iron Curtain speech, condemning the Soviet Union’s expansionist policies in Europe. As such, the game would take on political overtones. It was, George Orwell later said, “war minus the shooting.”

And so, while British fans were eager to watch the Soviet side, British authorities were much less eager to accommodate them.

The Foreign Office said that “it would take much more than a football match to break down the real barriers which the Soviet government firmly believes in.” Pressed by the British Embassy in Moscow, London ultimately acquiesced, but said Dynamo Moscow was being hosted not by the government but the British Football Association (FA).

The Soviet delegation had its own list of demands, including that a Soviet referee call one match — a game against Arsenal — and that all team meals take place at the Soviet Embassy, ostensibly because they feared the British might poison them. Moscow also insisted that revenue from the tour be split 50-50, a demand that was met.

The tour started inauspiciously in November, 1945. The FA angered Dynamo Moscow by first accommodating the team in a military barracks in central London without pillows or sheets, before scrambling to book them in a fancy hotel.

British press reports hinted that the local teams and their fans had little to fear. “Don’t expect much from Dynamo. They are only beginners, blue-collars, amateurs,” the London newspaper Evening Standard wrote.

“Until those games, we only knew that England was the motherland of football, that English football was the best in the world,” Dynamo Moscow forward Konstantin Beskov said in a 2001 documentary, More Than Just Football.

Leonid Solovyov, a Dynamo midfielder, remembered, “They told us that Englishmen are awesome, that they can carry the ball across the fields on their heads.”

At the same time, the Dynamo players were also aware of the pressure to positively represent the Soviet Union, which would use sports over the coming decades to illustrate the ostensible superiority of the communist system.

“It would have been a disgrace if we had come back to Moscow defeated. We would have been ashamed to show our faces in public,” Beskov recalled. In the end, Dynamo won two matches and drew the other two.

The visitors’ first match, against Chelsea, took place on November 13. Some 75,000 tickets were sold but at least 100,000 fans turned up, packing Stamford Bridge stadium to the rafters. The sheer weight of the crowd literally led to gates around the grounds crashing to the ground.

Before kickoff, Dynamo players handed bouquets of flowers to their bemused opponents, who were empty-handed and not used to such gestures.

On the field, powerhouse Chelsea took a quick 2-0 lead, as Dynamo players appeared awed by the amped-up audience — a change from the sedate and somber supporters they were used to at home. But the Soviet side shook off the early jitters and, supported by strong goalkeeping from Aleksei Khomich, fought back to earn a 3-3 tie.

After the match, Chelsea players tipped their hats to Dynamo, expressing their own awe. “Dynamo were one of the fastest teams I have ever seen in my life. They flash the ball from man to man in bewildering fashion, often while standing still,” defender Tommy Lawton said.

Later, Orwell wrote that “Dynamo is one of the fastest teams I’ve ever seen. They passed the ball while we were standing.”

Up next on November 19 was Cardiff City, then a third-division team, which Dynamo trounced 10-1 in a game broadcast live by Radio Moscow.

With socialist sympathy relatively high among the coal miners and steelworkers of South Wales, Cardiff warmly welcomed their Soviet visitors, hoisting the hammer-and-sickle flag above city hall and gifting each player a commemorative miner’s lamp.

On November 21, Dynamo faced Arsenal, which suited up “guest” players to replace regular squad members still serving in the armed forces. Among the additions was future legend Stanley Matthews, who in the 1960s would become the first player to be knighted.

Suspecting they were facing an English all-star team, the Soviet delegation insisted the match be officiated by their Russian referee, Nikolai Latyshev.

Arsenal’s home, Highbury, was still being used as an air-raid precaution center, so the match was played at Tottenham Hotspur’s stadium, White Hart Lane.

Lines of fans formed overnight, and police began letting them in the morning of the match.

But with fog blanketing most of London that day, few in the stands — or on the field, for that matter — could see much of the action. Latyshev was accused by Arsenal and British soccer heads of several dubious calls, including calling back what appeared to be a legitimate Arsenal goal. The game, dubbed “the farce in the fog” by the British, ended with Dynamo winning 4-3.

Scotland was the last stop for the Soviet side, which faced Glasgow Rangers at Ibrox Stadium on November 28. Tickets were sold on the black market for as much as 10 pounds –10 times their face value.

The game ended 3-3 and witnessed what some later called the goal of the tournament, scored by Vasily Kartsev after a passing sequence between Beskov and Vsevolod Bobrov. It was “as perfect a goal as has ever been scored at Ibrox,” The Daily Telegraph said.

Dynamo left its mark on soccer fans in Britain as well — in a way that was summed up by Sir Stanley Matthews, the knighted former player nicknamed the Wizard of Dribble.

“Many years passed since we first met the Russian football players,” he would later recount. “Since then, in the hearts of everyone who lived in those days, the words Dynamo Moscow are associated with the concept of class football.”

The article ‘War Minus The Shooting’: When Soviet Soccer Took On The Brits After World War II – Analysis appeared first on Eurasia Review.