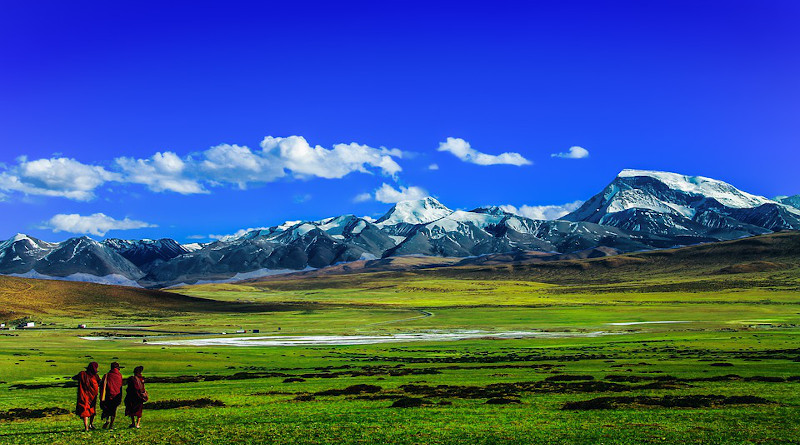 A study has revealed for the first time the ancient origins of one of the world’s most important ecosystems by unlocking the mechanism which determined the evolution of its mountains and how they shaped the weather there as well as its flora and fauna.

It was previously thought Southern Tibet and the Himalaya were instrumental in turning the once barren land of eastern Asia into lush forests and abundant coastal regions which became home to a rich array of plant, animal and marine life, including some of the world’s rarest species. But new findings, published in the journal Science Advances, conversely show Northern Tibet played the more influential role in this transformation which began more than 50 million years ago.

Scientists from a UK-China partnership used an innovative climate model to simulate vegetation and plant diversity, combined with spectacular new fossil finds, to discover how this unique biodiversity hotspot evolved.

Lead author, Dr Shufeng Li, a visiting scientist at the University of Bristol in the UK and associate professor at Xishuangbanna Tropical Botanical Garden (XTBG) Institute in Yunnan, China, said: “Until now it was unknown why the climate changed from that of a dry, arid, almost desert-like ecosystem to that of a lush, wet ecosystem where a vast array of plant, animal, and marine life can be found, including some of the world’s rarest species.

The findings showed that from the late Paleogene to the early Neogene age, some 23-40 million years ago, the growth of the north and northeastern portion of Tibet was the most important factor because it increased rainfall, especially winter rainfall, over eastern Asia where dry winter conditions existed before.

This allowed the development of a stable, wet and warm climate, conducive to the evolution of vast and varied plants and animal species which formed the biodiversity hotspot known today for supplying more than a billion people with fresh water and providing ingredients used for lifesaving pharmaceutical drugs. Rare species of monkey, tiger, leopard, bear, fox, mongoose, hedgehog, seal, dolphin, and sea lion all live in this abundant ecosystem.

Earlier research has mainly investigated the impact of Tibetan mountain building much further to the South when India collided with Asia around 55 million years ago, leading to the rise of the Himalaya mountains and, eventually, the vast arid Tibetan Plateau. However, recent work is increasingly showing the creation of the modern Tibetan plateau was complex, and did not rise as one monolithic block as originally believed.

Co-author Professor Paul Valdes, Professor of Physical Geography at the University of Bristol who led the modelling group, said: “Most previous studies have focused on Southern Tibet and the Himalaya, but our results indicate it is the growth of northern Tibet which is really important.

“The topography of northern Tibet decreases the East Asian winter monsoon winds in the southern part of China, causing wetter winters in eastern Asia and this allows the expansion of vegetation and biodiversity.”

So enigmatic was the drastic change that even in Chinese folklore this area is known as the ‘Land of Fish and Rice’, due to its immense productivity.

“Without the growth in Northern Tibetan mountains, none of this would exist. But our research should also be taken as a cautionary tale,” Professor Valdes explained.

“A unique set of tectonic and stable climatic conditions over millions of years allowed the development of this rare species rich region of South East Asia. However, global warming, harmful intensive agricultural techniques, forest clearing and lack of integrated conservation to preserve this unique ecosystem means once it is gone, it is gone for good.”

Professor Zhekun Zhou, of the Chinese Academy of Sciences’ XTBG, who led on the fossil analysis, said: “So effectively, without northern Tibetan growth, there would be no ‘land of milk and honey’ in eastern Asia. This research represents a significant breakthrough in understanding how this remarkably rich region of mountainous terrain and diverse plant life formed.”