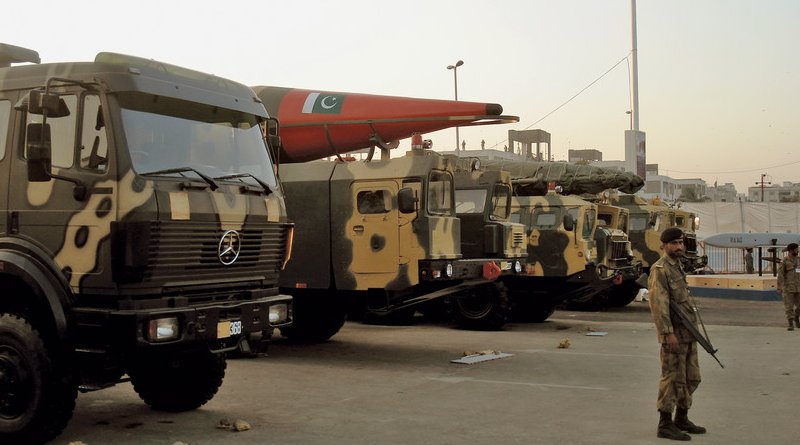 The Director General of Pakistan’s Foreign Ministry’s Arms Control and Disarmament Division, Kamran Akhtar, has recently said that “Nuclear Suppliers Group (NSG) very much epitomises the politics of non-proliferation at the global level.” He made these remarks in a webinar hosted by the Strategic Vision Institute (SVI). Mr. Akhtar has emphasized superior credentials of Pakistan as compared to India. He has qualified Islamabad’s capability for membership of NSG “even going by the formula proposed by Ambassador Rafael Grossi in 2016, as [Pakistan] does not have a mix of safeguarded and unsafeguarded facilities and has been more forthcoming in accepting legally binding commitments.” He added that the decision on applications for membership from India and Pakistan should not be subject to two separate criteria. Mr. Akhtar remarks have identified the sour reality that how narrow-based political interest are superseding the larger objective of non-proliferation.

The NSG was established 35 years ago in response to Indian nuclear tests of 1974 to reinforce the Nuclear Nonproliferation Treaty (NPT) by establishing guidelines for nuclear supply. These voluntary guidelines aimed to avoid export of illicit nuclear material and to prevent nuclear trade with states which do not follow basic requirements of non-proliferation. Indian diversion of Canadian supplied ‘CIRUS’ reactor for producing plutonium for its nuclear weapons test was the prime reason for creating NSG. While the NSG provides cartel based restrictions on proliferation of uranium enrichment, in recent years NSG has failed to adopt tougher constraints on spent fuel reprocessing technologies.

Adding the insult to injury, in 2008 the NSG exempted the nuclear related transfers to India despite objections raised by Austria, Ireland, and New Zealand. The culprit (India) who was responsible for the creation of NSG, has now become the biggest beneficiary of exceptional treatment within the framework of the cartel, which is undermining the credibility of the entire non-proliferation regime.

The 2008 waiver awarded to India, was primarily driven by major nuclear suppliers’ economic and political motives while setting a biased precedent because it gives India comparable commercial advantages of de-jure nuclear weapons states, albeit without the obligations of nonproliferation. Some member states initially objected to the U.S. move to gain exception for India from NSG rules. Nevertheless, these states eventually yielded to their political interests and with the baggage of heavier diplomatic clout, the countries like Russia and France facilitated the U.S.in granting waiver to India. That precedent of country-specific exception for NSG membership has played a detrimental role in the credibility of the global non-proliferation regime. The unilateral role of the U.S. in guiding international non-proliferation regime has set a foundation for India to maintained an unsafeguarded nuclear weapons program under the umbrella of NSG waiver.

After securing waiver, India concluded fourteen nuclear deals with different countries in the next eight years,  before officially applying for NSG membership in 2016. But this time some of the member states avoided superseding their political interests over the collective guiding principles which are important to protect the nonproliferation regime. China, Turkey, Austria, New Zealand and Ireland upheld the principled position that if India is allowed to membership of NSG without signing NPT, it will set an appalling point of reference for future nonproliferation efforts. Chinese Foreign Ministry deliberated its position by assuring that “[Beijing will] stick to the two-step approach which requires the NSG members to work out a solution applicable to all non-NPT states, and on that basis, to deliberate on specific non-NPT states’ joining.”

The mainstreaming of nuclear India through NSG waiver was always a politically motivated and discriminatory offer. Whereas, this fact was further established when Pakistan formally submitted its application for NSG membership. Rafael Mariano Grossi, a former chairman of the NSG, proposed a draft to facilitate India for the membership but left Pakistan out. Pakistan’s official position was the simultaneous entry of Islamabad and New Delhi into NSG because India could block Pakistan’s entry once former becomes part of NSG. Grossi tried to defuse this argument by proposing that “one non-NPT member state should reach an understanding not to block consensus on membership for another non-NPT member state.” However, Grossi also advocated that before acquiring the status of membership, a non-NPT state must fulfill the criteria of attaining NSG waiver as India did in 2008. Consequently, Pakistan has argued that it is important to have equal and simultaneous criteria for membership while shunning the overwhelming geopolitical agenda in NSG.

Pakistan has substantial mandatory infrastructure, expertise, manpower and credentials to contribute to NSG related trade. Whereas, the mantra of India’s image as a mature and responsible nuclear state is an exaggerated one. As compared to India, Pakistan has constituted an unambiguous separation plan, recognized by International Atomic Energy Agency (IAEA). Nuclear safety and security are of a high priority in Pakistan’s strategic calculation while strictly adhering to the international principles of non-proliferation. Today, the nonproliferation regime is under a lot of pressure concerning the current geopolitical landscape and the only way forward is to avoid narrow political interests in the realm of nonproliferation.

*Syed Zain Jaffery is a student of Current Affairs and Political Science with Masters degree from NUST, Islamabad.

The article Politics Of Non-Proliferation In NSG – OpEd appeared first on Eurasia Review.