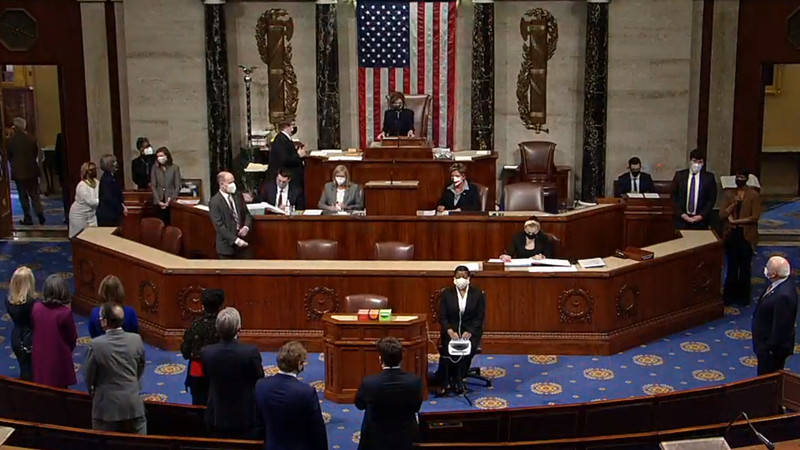 Three times in American history, the House of Representatives has impeached a president, and each time the Senate has voted to acquit him — most recently a year ago when then-President Donald Trump was charged with seeking to pressure Ukraine’s president into gathering political dirt against Trump’s political rival, Democrat Joe Biden.

Trump made history again this month, when he became the first president to be impeached a second time — this time accused of instigating his supporters to storm the U.S. Capitol January 6 to prevent Congress from certifying Biden’s election victory over Trump.

The new impeachment charge of inciting an insurrection was approved by the House on January 13, a week before Trump left office. But with the Senate set to formally try the former president beginning on February 9, a constitutional controversy is swirling over whether the Senate can try and convict a former president.

The question is not an academic one. On Wednesday, 45 of 50 Senate Republicans mounted an unsuccessful attempt to derail Trump’s trial by questioning its constitutionality in a floor debate and roll call vote.

Their reasoning: Once a president is out of office, he becomes a private citizen and cannot be tried and convicted even if he’s already been impeached by the House. It is an argument that Trump’s lawyers are expected to make while pressing for the former president’s acquittal.

“Private citizens don’t get impeached,” said Senator Rand Paul, a Kentucky Republican and a staunch supporter of Trump. “Impeachment is for removal from office, and the accused here has already left office.”

Yet the question of whether a former president can be tried remains unsettled and even those who dispute its constitutionality acknowledge there is room for debate.

“There are a variety of opinions, though virtually all scholars who have written on this issue have said that it is a very close question,” Jonathan Turley, a conservative law professor at George Washington University, wrote on his personal blog on Wednesday after briefing Republican senators on the constitutional and historical aspects of impeachment.

Keith Whittington, a Princeton University professor of politics, said there is no consensus on the issue among legal scholars, as few had considered the question prior to Trump’s second impeachment and the ensuing constitutional controversy.

The U.S. Constitution states that “the President, Vice President and all Civil Officers of the United States … shall be removed from office” if convicted of “Treason, Bribery, or other high Crimes and Misdemeanors.”

In Turley’s reading, the phrase “the President” means the current occupant of the White House and suggests that only a sitting president can be impeached.

“At the second Trump impeachment trial, the president will be Joe Biden, not Donald Trump,” Turley wrote.

“The text of the Constitution would seem strongly to suggest that the framers intended impeachment to be used only for removal of a sitting official and once removed, it could also disqualify him,” said Dershowitz, who was one of Trump’s lawyers during the former president’s first impeachment trial. “But it was never intended to be used merely as a means of future disqualification as it’s being used today.”

House Speaker Nancy Pelosi, a California Democrat, said House members had no choice but to impeach Trump and seek his conviction as a way of preventing him from ever running again for federal office after then-Vice President Mike Pence rejected Democrats’ calls for him to invoke the 25th Amendment to the Constitution to remove Trump from office. Trump has indicated he wants to run for re-election in 2024.

Other scholars argue that removal and disqualification are two separate “aspects” of the impeachment power, meaning that a president can be disqualified from holding office in the future even if he has not been forced out of office.

“This means that former officers remain subject to the impeachment power after leaving office, for purposes of permitting imposition of the punishment of disqualification,” a group of legal scholars wrote in a recent open letter in support of the Senate trial.

Whittington noted that the Constitution does not “explicitly prohibit” the impeachment of a former president. Nor does disqualification depend on “currently being an officeholder at the time of impeachment,” he said.

Another point of contention among scholars debating the constitutionality of trying a former president is the U.S. Constitution’s silence on whether former officials can be impeached.

According to Whittington, the framers of the U.S. charter borrowed the “power of impeachment” from British parliamentary practice and state constitutions, both of which permitted the impeachment and trial of former officials.

“And so when they entrusted Congress with a power to impeach, part of what went along with that was the possibility of impeaching former government officials for how they conducted themselves while in office,” Whittington said.

To Dershowitz, however, the very absence of any reference to impeaching a former president suggests the framers were opposed to the idea.

“They could easily have added a provision saying that a former president could be impeached, and the chief justice would preside. They didn’t do that,” Dershowitz said.

Is there a precedent?

While no former president has ever been tried before, there is precedent for the impeachment trial of a former high-level official. In 1876, the Senate tried former War Secretary William Belknap on corruption charges after determining that it had jurisdiction over former officials.

Though the final vote fell short of the two-thirds majority required to convict Belknap, some scholars have seized on the case to argue that the Senate has jurisdiction over a former president.

But Dershowitz said the Belknap case and the Trump trial are not analogous. For one, Belknap resigned before being impeached. Second, he was not president. And third, he was eventually acquitted “largely” because many senators believed the Senate lacked the power to try a former Cabinet member.