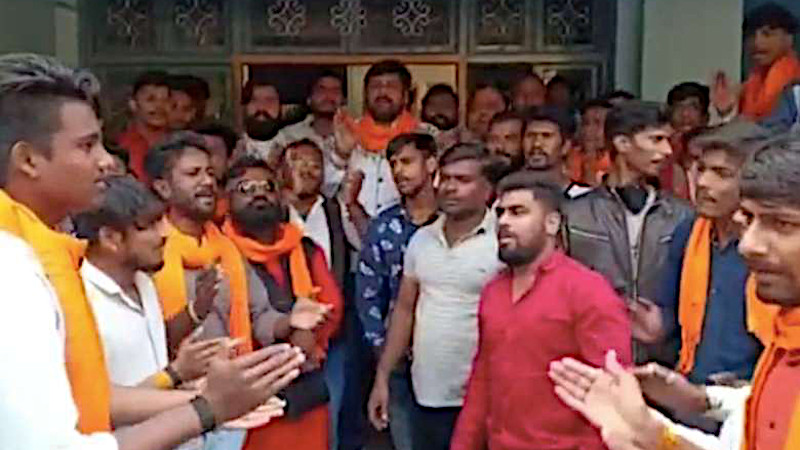 However, Catholic authorities denied the allegations and described it as an organized attack to terrorize Christians who had peacefully gathered there for their routine prayers.

“We used to give our space in the center to different Christian denominations, including Pentecostal groups, for prayer meetings. On Jan. 26 too, we gave it to a Pentecostal group for holding their prayer service,” said Father Babu Joseph, the center’s director.

The Society of the Divine Word runs the center in Madhya Pradesh’s business capital to train religious and others in social communications and media.

It also runs several Hindi and English social media channels and works to produce Hindi programs for Radio Veritas, the Catholic radio service based in Manila.

“Since it was a sudden attack, everyone got scared,” Father Joseph told UCA News on Jan. 27. He said the attackers did not inflict injury on Christians but damaged a few glass photo frames on the wall.

The resident priests were out at the time of the attack but called the police soon after they came to know about it. Police rushed to the spot, protected the Christians and removed the Hindu activists.

Police registered a case against 15 persons for charges including trespass and launched an investigation.

Father Maria Stephen, public relations officer for the Catholic Church in Madhya Pradesh, sought action against those involved in the attack.

“The attack seems to be fallout from the new anti-conversion law notified by the government very recently and it terrorized the Christians,” Father Stephen told UCA News on Jan. 27.

The Madhya Pradesh government on Jan. 9 issued a new ordinance to check religious conversion that stipulates jail sentences of up to 10 years and a fine for offenders.

However, the new law allows the reconversion of non-Hindus to Hinduism. Leaders of the state government run by the pro-Hindu Bharatiya Janata Party (BJP) hold that Hinduism is the parental religion of religious minorities in the country such as Christians and Muslims.

“Under the new law, the onus of proving an allegation of conversion against a person is on the accused, not on the accuser,” said Father Stephen.

“When such a one-sided law is there, anybody who has a grudge against a minority community can misuse the law, and the innocent person will bear the brunt.”

Madhya Pradesh is among several states where Christians face violence and harassment at the hands of Hindu radicals.