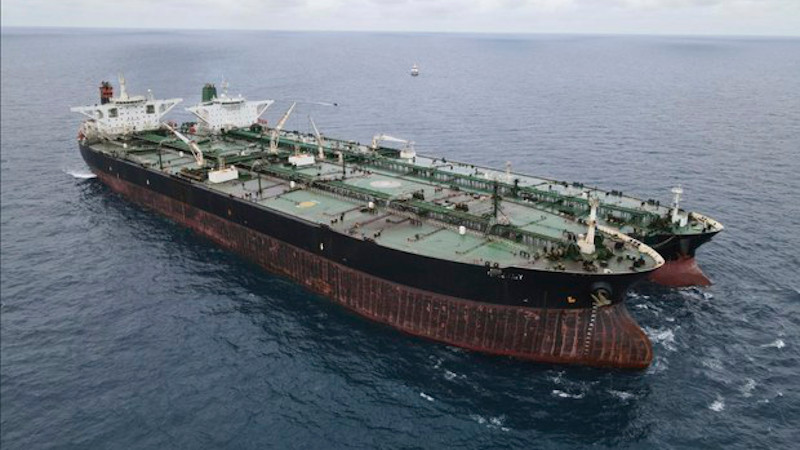 The crews of two tankers seized by Indonesia over the weekend admitted that they were carrying out an unauthorized oil transfer from an Iran-flagged vessel to a Panama-flagged one and hiding their ships’ identities, a spokesman for the Indonesian coast guard said on Tuesday.

Very Large Crude Carriers (VLCC) MT Horse and MT Freya were scheduled to arrive Tuesday afternoon at a naval port in Batam, in the Riau Islands, for an ongoing investigation after they were seized by Indonesia’s Maritime Security Agency (Bakamla) on Sunday.

Members of the crew admitted they were making an unsanctioned transfer of oil, had shut down the tankers’ automatic identification systems, lowered national flags and covered the vessels’ names in a bid to conceal their identities, Bakamla spokesman Wisnu Pramandita said.

“It will be investigated further in Batam. However, they were caught red-handed and confessed,” Wisnu said in a statement received by BenarNews.

The head of Bakamla, Adm. Madya Aan Kurnia, said Indonesia had the authority to investigate because the ships were caught in the act of committing violations regulated not only by Indonesia but also by international law.

“Iran can protest, or question this. But it’s clear, the two supertankers were caught red-handed by Bakamla’s KN Marore as it was on patrol,” Aan told BenarNews by phone.

Aan said the crews of the two tankers initially declined to answer radio calls when their positions were detected in waters off Pontianak, West Kalimantan.

“They were caught transferring fuel oil from an Iranian ship to a Panamanian ship. When the security forces arrived, some oil was thrown into the sea, creating pollution,” Aan said.

After the tankers arrive in Batam, an investigative team with representatives of several ministries and related institutions will carry out the investigations, he said.

“This is not just a security issue,” Aan said, adding that he had reported about the two tankers to the Foreign Ministry and the ministries of immigration, transportation, environment, and energy and mineral resources, along with police.

“Tomorrow the teams will start investigations, in their respective fields.”

Aan said the two tankers had been escorted to the naval base for investigation of initial allegations. Further legal measures would be determined based on the results of the investigation, he said.

He said that Bakamla had become more vigilant after a Chinese survey ship earlier this month went through Indonesia’s exclusive economic zone with its AIS turned off.

The Indonesian Navy has been investigating the discovery of an unmarked underwater surveillance drone, or sea glider, near South Sulawesi in December. The device, which is capable of collecting military intelligence, likely belongs to the government of China, Malcolm Davis, of the Australian Strategic Policy Institute, told the website of Australia’s ABC News at the time.

“We’re also suspicious because of that sea glider. The issue has been conveyed to the Chinese side as well. We ask the foreign ministry to tell the Chinese that while passing through Indonesian sea routes, AIS must be turned on and it must be reported if the system does not work,” Aan said.

The tankers were suspected of committing four violations, including violating the right of passage in an Indonesian archipelagic sea lane and transferring oil there, Wisnu told BenarNews on Monday.

The Freya had traveled from Bayuquan district in China’s Liaoning province on Jan. 6 and was near Indonesia and Singapore six days ago, according to the MarineTraffic.com website. The Panama-flagged tanker is owned and managed by a firm listed as the Shanghai Future Ship Management Co., according to information from the site.