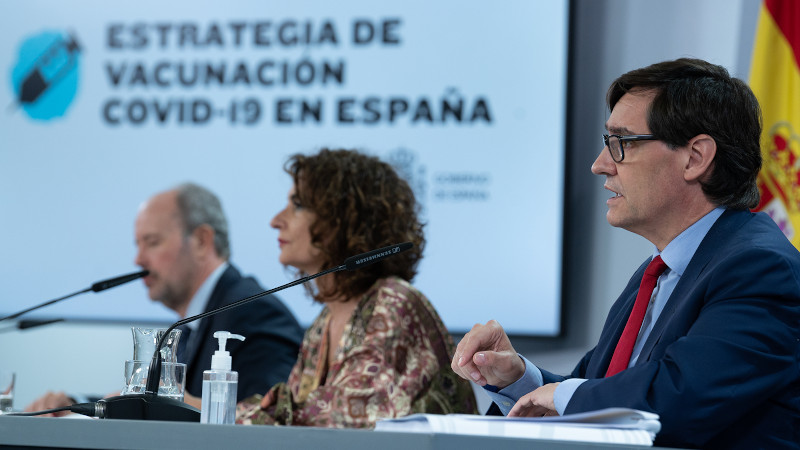 Residents and healthcare workers that work in care homes for the elderly, and people with disabilities will be the first to be vaccinated in Spain. According to the Spanish government, the vaccine is safe, effective and its administration will be voluntary and free of charge.

Spain’s Minister for Health, Salvador Illa, presented earlier this week the Council of Ministers with the “COVID-19 Vaccination Strategy in Spain”, a document that has been drawn up pursuant to the agreement adopted on 9 September by the Inter-territorial Council of the National Health System.

Salvador Illa stated that the aims of the plan are to reduce people falling ill, being admitted to hospital or dying as far as possible, and to guarantee that vaccinations can start as soon as the first doses of approved vaccines are received.

The document establishes an order of priority for those population groups to be vaccinated based on scientific, ethical, legal and economic criteria. It establishes the logistics for the distribution and administration of the vaccines, sets out the priority lines for the monitoring and evaluation of the vaccination through a specific register for COVID-19 and contains a communication strategy aimed at healthcare workers and the rest of the population.

The minister announced that in the first stage, between January and March 2021, there will be a very limited number of doses of the vaccine supplied. In the second stage, between May and June, the number and the people to be vaccinated will gradually increase, and the number of doses and vaccines available will increase in the third stage to cover all the priority groups.

The government’s aim, claimed Salvador Illa, is to cover population groups in order, starting with the most vulnerable. Accordingly, the first groups to be vaccinated will be those people who live in care homes for the elderly, healthcare workers and day-care workers who care for them, and people with disabilities. These will be followed by the rest of the healthcare workers and non-institutionalised dependents. This is a group of some 2.5 million people.

Salvador Illa stressed that all the vaccines employed to immunise against COVID-19 will have the same levels of safety as any others habitually used to prevent other diseases. “Countries, institutions, researchers and companies all over the world are making an unprecedented effort to develop a safe and effective vaccine as quickly as possible”, he said.

The Minister for Health also underlined that the vaccine will be administered free of charge and on a voluntary basis through the National Health System, the same as any other programmed vaccines.

Spain will receive 140 million doses to immunise some 80 million people, which is higher than the present population.

Salvador Illa announced that a special pharmacovigilance plan will be introduced to monitor all those people who have been vaccinated, their possible adverse reactions and to control the second doses that they need to be administered. Furthermore, Spain will take part, together with seven other countries, in a European study to monitor the efficacy of the vaccine.

As regards logistics, the minister argued that the system is ready to start administering the doses of the vaccine, and recalled that each year 1 million people are vaccinated against the flu at 13,000 vaccination points, a figure that has significantly risen this year.

Salvador Illa also pointed out that the companies that distribute pharmaceutical and vaccination products are ready to guarantee the special conservation requirements of the doses at very low temperature levels.

As regards the communication of the plan, the minister stressed that it will be governed by principles of truth, transparency, participation, equity and constant evaluation, with a specific part to be destined for healthcare workers.

The minister reiterated that this will be a single plan for the whole country, drawn up with the collaboration of the regional governments in solidarity with Spain’s European partners. “We are facing one of the most important challenges ever as a country, which is to reduce to the utmost the impact of the pandemic with a vaccine that will provide immunity and save lives. Spain is a supportive, generous and committed country, and I am convinced that we will demonstrate this with a high vaccination rate”, he added.

Acquisition of 20 million doses of Pfizer-BioNTech

The Council of Ministers authorised the acquisition of more than 20 million doses of vaccine developed by Pfizer-BioNTech. Spain signed up to the initial centralised purchase of 200 million doses agreed between the European Commission and the company, of which 20,873,941 doses correspond to Spain.

The Minister for Health recalled that this vaccine requires two doses and will allow 10,400,000 citizens to be immunised.

The government also authorised the National Health System and the central State Social Services system of IMSERSO to take in COVID-19 patients without clinical or minor symptoms, or who require accommodation to overcome periods of isolation during the health emergency.