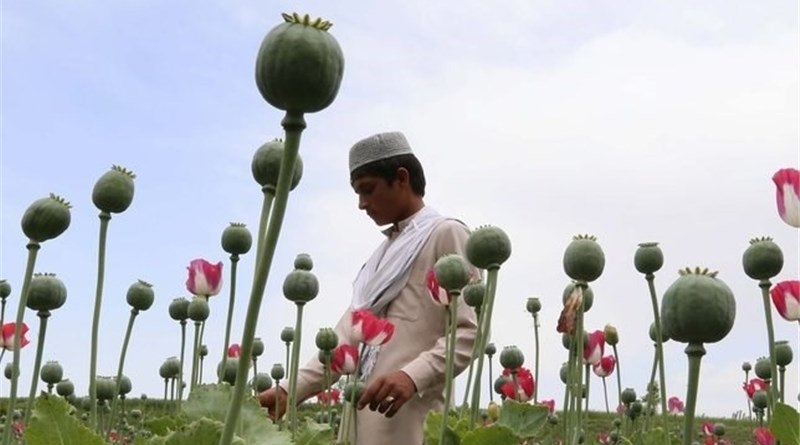 The Golden Triangle and the Golden Crescent are considered to be two of the safest havens for illicit drug manufacturing and trading on the planet. The former comprises the countries of Laos, Thailand and Myanmar in South Eastern Asia and the latter is located at the cross roads of central, south and Western Asia, overlapping the mountain ranges of Pakistan, Afghanistan and Iran.

The Golden Crescent is much older than its south eastern counterpart, when it comes to the manufacture of illegal narcotics. It mainly started its functioning as an opium producing “sector” in the 1950s, with the bulk of opiates being produced in Afghanistan. Steadily it geared up its production of heroin, to ‘compete’ with the Golden Triangle. Following Operation Enduring Freedom and the US invasion of Afghanistan in 2001, opium cultivation saw a significant drop to about 90% in Afghanistan. But post 2002, the trend was reversed, with the Golden Crescent region now producing about 8000 tons of the total 9000 tons of opium production the world, thereby almost monopolizing it.

i) Through the Northern route, intravenous drugs are illegally smuggled into the central Asian countries of Tajikistan, Kyrgyzstan, and Kazakhstan and into Russia.

ii) The Southern route, through Pakistan and Iran, is mainly used to smuggle opiates and intravenous drugs into the Indian subcontinent, Africa and even in some regions of Oceania. The presence of the vast Indian Ocean actually smoothen the whole process.

The Golden Triangle, as a whole, is the second largest producer of banned opium cultivation, with Myanmar being the major producer of the same.(UNODC, 2005). As per the report published by United Nations Office on Drugs and Crime (UNODC) latest Southeast Asia Opium Survey 2013, opium cultivation in the Golden Triangle increased by 22% in 2013, with a growth rate of 13% in Myanmar alone. Even a decade earlier, half of the world’s heroin was produced in the triangle. But political instability and militant insurgency in Myanmar, have forced drug barons there, to look for a cheap and easy way to produce drugs, without running the risk of exposure. Instead of the tedious process of heroin production, amphetamines and methamphetamines seemed as the most viable choice.

From Myanmar, then, these substances are transported to the adjoining border areas with Thailand, for the final products to be synthesized. Bangkok is the last destination in the list, from where the finished drugs are destined for the vast international market.

India’s unfortunate geographic position, sandwiched between the Golden Triangle and Golden Crescent, has made the country all the more vulnerable to illegal narcotic threats. Substance abuse in India has taken up a deadly shape in the last few decades, mostly in the North Eastern and North western (Punjab) region of the country. The close proximity to the two red drug trafficking zones is accounted as one of the primary reasons of increased drug trafficking in these two particular regions of India.

Data from the National AIDS Control shows the staggering number of HIV infections in the North Eastern part of India, signaling the increased consumption of intravenous drugs. Diacetylmorphine and Diamorphine (Heroin) is the most smuggled drug in the region, which mostly became available during the mid-1970s. Since then, there has been a worrisome rise in its consumption. Although, the heroin smuggled, mostly remains restricted to local consumption. Being so near Myanmar, illegal opium trade has also seen a substantial boost in the North Eastern part. The political instability in the region, coupled with porous, ill demarcated borders, provides a robust ground for illicit drug trafficking.

The North Western part of India being adjacent to the Golden Crescent, has to endure the peril of drug trafficking. The effect has been all the more devastating in the Indian state of Punjab. Here, opium or heroin is not locally manufactured, but are smuggled through the border regions with Pakistan. Since the 1980s, Golden Crescent has been the primary source of trafficked heroin and hashish in India.

The drug cartels operating in the Golden Crescent have been using Punjab, as the main “gateway” to expand their drug trade, throughout mainland India, as far as the southernmost state of Kerala. Taran, Tarn, Ferozpur, Fazlika and Amritsar, falling in the Indo Pak Border region, are part of the main drug smuggling route, used by the Pakistani and Afghanistani drug cartels to smuggle their consignments. Also, the vast Indian Ocean has, in a way, exponentially increased their reach.

Lying between the Golden Crescent and the Golden Triangle has made India a robust hub of illicit drug trade. The relatively hassle free smuggling of drugs, through the various borders of India, only shows the lack of proper vigilance and their porous nature, which is a major challenge to the national security. The unholy nexus that exist between terrorists, drug smugglers and criminal networks is another major threat. The money amassed from such illegal drug trade has been used to finance terror activities on the Indian soil.

Radical militants in the North Eastern Region and Jammu and Kashmir, have time and again, had major drug cartels as their sponsors. In the North Eastern region, small militant organization often engage in drug smuggling to rack up quick funds. The big militant organizations, on the other hand, seek huge amount of protection money from drug traffickers to safely smuggle their consignments through secret tunnels and ways, fooling the security forces. Often with drugs, illegal weapons and black money have also been smuggled into the Indian mainland; which is yet another big blow to the internal security of the republic.

India’s response to fighting this menace of drug smuggling has been lukewarm. The only two primary drug laws of India, that have been legislated to counter substance abuse are Psychotropic Substances Act (1985) and the Prevention of Illicit Trafficking in Narcotic Drugs and Psychotropic Substances Act (1988). Both of these have failed to attain any substantial change.

Lack of any checks and surveillance, coupled with political instability in the countries of Golden Triangle and Crescent has made things worse for India. For better coordination to fight the peril of drug trafficking India has entered into 37 Bilateral Agreements/ Memoranda of Understandings, with other neighboring and some foreign countries; the impact of which are yet to be assessed. There is a burning necessity to re analyze India’s strategy in countering the menace of drug trafficking.

Land borders as well as maritime borders need to be better secured with robust surveillance and patrolling. Enacting comprehensive legislations for the same should be another priority. Last but not the least, this war against the menace of drug cannot be won by India without the support of her neighbours. Active coordination and cooperation among the countries of the Indian sub-continent will go a long way to minimize and counter the threats associated with drug trafficking.