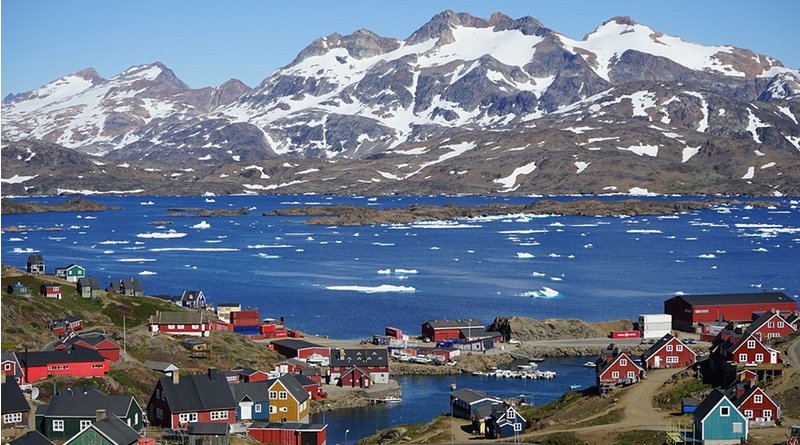 Scientists at the University of California, Irvine and NASA’s Jet Propulsion Laboratory have for the first time quantified how warming coastal waters are impacting individual glaciers in Greenland’s fjords. Their work is the subject of a study published recently in Science Advances.

Working under the auspices of the Oceans Melting Greenland mission for the past five years, the researchers used ships and aircraft to survey 226 glaciers in all sectors of one of Earth’s largest islands. They found that 74 glaciers situated in deep, steep-walled valleys accounted for nearly half of Greenland’s total ice loss between 1992 and 2017.

Such fjord-bound glaciers were discovered to be the most subject to undercutting, a process by which warm, salty water at the bottom of the canyons melts the ice from below, causing the masses to break apart more quickly than usual. In contrast, the team found that 51 glaciers positioned in shallower gullies experienced less undercutting and contributed only about 15 percent of the total ice loss.

“I was surprised by how lopsided it was. The biggest and deepest glaciers are undercut much faster than the smaller glaciers in shallow fjords,” said lead author Michael Wood, a post-doctorate researcher at NASA’s Jet Propulsion Laboratory in Southern California, who began this research as a doctoral student at UCI. “In other words, the biggest glaciers are the most sensitive to the warming waters and those are the ones really driving Greenland’s ice loss.”

The study highlighted the dynamic whereby deeper fjords allow the intrusion of warmer ocean water than shallow ones, hastening the process of undercutting with some of Greenland’s largest glaciers.

Greenland is home to one of Earth’s only two ice sheets, the largest being Antarctica’s. The ice in Greenland is more than two miles (three kilometers) thick in places. At the edges of the land mass, the vast glaciers extending from the ice sheet travel slowly down valleys like icy conveyor belts, which inch into the fjords and then melt or break off as icebergs. The ice is replenished by snowfall that is compressed over time into the ice pack.

If the ice sheet were in balance, the amount of snow accumulating on the top would roughly equal the ice lost from melt, evaporation and calving – chunks breaking free from anchored masses and floating off into the ocean.

But the ice sheet has been out of balance since the 1990s. Melt has accelerated and calving has increased, causing glaciers that extend into the sea to retreat back toward land. Together, these are resulting the ice sheet shrinkage.

According to the research team, the build-up of warm salty water at the bottom of fjords has been accelerated by increasing temperatures in the summer months, which heat the surfaces of glaciers, creating pools of meltwater. This liquid leaks through cracks in the ice to form subsurface freshwater rivers which flows into the sea where it interacts with salty water beneath fjords.

Glacier meltwater is free of salt, so it is lighter than seawater and rises to the surface as a plume, dragging up warm water and putting it in contact with the bottoms of glaciers. Fjord depth is a fairly immutable factor, but other factors such as seawater temperature and the amount of meltwater from glaciers surfaces are greatly impacted by climate warming. All three factors combine to cause accelerated deterioration of Greenland’s ice sheet, the researchers said.

As the water temperature around Greenland’s coastline is predicted to continue to increase in the future, these findings suggest that some climate models may underestimate glacial ice loss by at least a factor of two if they do not account for undercutting by a warm ocean.

The study also lends insight into why many of Greenland’s glaciers never recovered after an abrupt ocean warming between 1998 and 2007, which caused an increase in ocean temperature by nearly 2 degrees Celsius. Although ocean warming paused between 2008 and 2017, the glaciers had already experienced such extreme undercutting in the previous decade that they continued to retreat at an accelerated rate.

“We have known for well over a decade that the warmer ocean plays a major role in the evolution of Greenland glaciers,” said OMG deputy principal investigator Eric Rignot, also of JPL and UCI. “But for the first time, we have been able to quantify the undercutting effect and demonstrate its dominant impact on the glacier retreat over the past 20 years.”