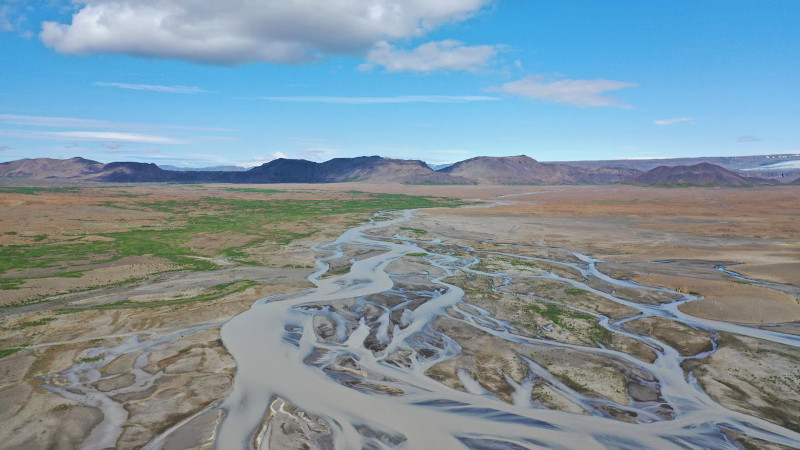 Once upon a time, seasons in Gale Crater probably felt something like those in Iceland. But nobody was there to bundle up more than 3 billion years ago.

The ancient Martian crater is the focus of a study by Rice University scientists comparing data from the Curiosity rover to places on Earth where similar geologic formations have experienced weathering in different climates.

Iceland’s basaltic terrain and cool weather, with temperatures typically less than 38 degrees Fahrenheit, turned out to be the closest analog to ancient Mars. The study determined that temperature had the biggest impact on how rocks formed from sediment deposited by ancient Martian streams were weathered by climate.

The study by postdoctoral alumnus Michael Thorpe and Martian geologist Kirsten Siebach of Rice and geoscientist Joel Hurowitz of State University of New York at Stony Brook set out to answer questions about the forces that affected sands and mud in the ancient lakebed.

Data collected by Curiosity during its travels since landing on Mars in 2012 provide details about the chemical and physical states of mudstones formed in an ancient lake, but the chemistry does not directly reveal the climate conditions when the sediment eroded upstream. For that, the researchers had to look for similar rocks and soils on Earth to find a correlation between the planets.

The study published in JGR Planets takes data from well-known and varying conditions in Iceland, Idaho and around the world to see which provided the best match for what the rover sees and senses in the crater that encompasses Mount Sharp.

The crater once contained a lake, but the climate that allowed water to fill it is the subject of a long debate. Some argue that early Mars was warm and wet, and that rivers and lakes were commonly present. Others think it was cold and dry and that glaciers and snow were more common.

“Sedimentary rocks in Gale Crater instead detail a climate that likely falls in between these two scenarios,” said Thorpe, now a Mars sample return scientist at NASA Johnson Space Center contractor Jacobs Space Exploration Group. “The ancient climate was likely frigid but also appears to have supported liquid water in lakes for extended periods of time.”

The researchers were surprised that there was so little weathering of rocks on Mars after more than 3 billion years, such that the ancient Mars rocks were comparable to Icelandic sediments in a river and lake today.

“On Earth, the sedimentary rock record does a fantastic job of maturing over time with the help of chemical weathering,” Thorpe noted. “However, on Mars we see very young minerals in the mudstones that are older than any sedimentary rocks on Earth, suggesting weathering was limited.”

The researchers directly studied sediments from Idaho and Iceland, and compiled studies of similar basaltic sediments from a range of climates around the world, from Antarctica to Hawaii, to bracket the climate conditions they thought were possible on Mars when water was flowing into Gale Crater.

“Earth provided an excellent laboratory for us in this study, where we could use a range of locations to see the effects of different climate variables on weathering, and average annual temperature had the strongest effect for the types of rocks in Gale Crater,” said Siebach, a member of the Curiosity team who will be a Perseverance operator after the new lander touches down in February. “The range of climates on Earth allowed us to calibrate our thermometer for measuring the temperature on ancient Mars.”

The makeup of sand and mud in Iceland were the closest match to Mars based on analysis via the standard chemical index of alteration (CIA), a basic geological tool used to infer past climate from chemical and physical weathering of a sample.

“As water flows through rocks to erode and weather them, it dissolves the most soluble chemical components of the minerals that form the rocks,” Siebach said. “On Mars, we saw that only a small fraction of the elements that dissolve the fastest had been lost from the mud relative to volcanic rocks, even though the mud has the smallest grain size and is usually the most weathered.

“This really limits the average annual temperature on Mars when the lake was present, because if it were warmer, then more of those elements would have been flushed away,” she said.

The results also indicated the climate shifted over time from Antarctic-like conditions to become more Icelandic while fluvial processes continued to deposit sediments in the crater. This shift shows the technique can be used to help track climate changes on ancient Mars.

While the study focused on the lowest, most ancient part of the lake sediments Curiosity has explored, other studies have also indicated the Martian climate probably fluctuated and became drier with time. “This study establishes one way to interpret that trend more quantitatively, by comparison to climates and environments we know well on Earth today,” Siebach said. “Similar techniques could be used by Perseverance to understand ancient climate around its landing site at Jezero Crater.”

In parallel, climate change, especially in Iceland, may shift the places on Earth best-suited for understanding the past on both planets, she said.