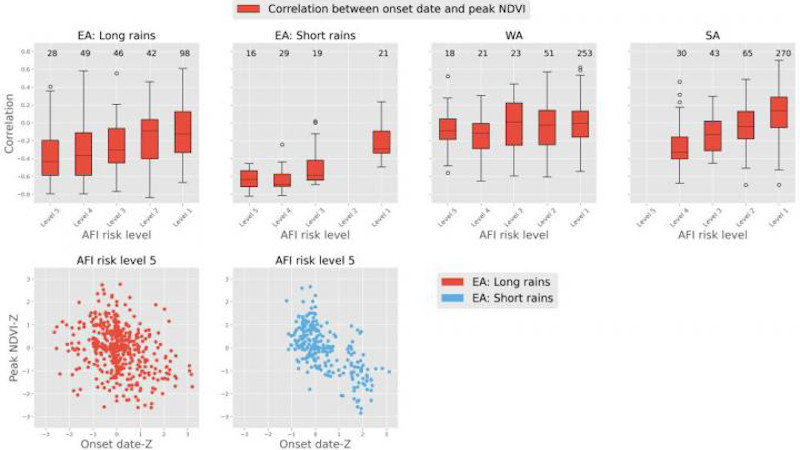 The onset date of the yearly rainy season reliably predicts if seasonal drought will occur in parts of Sub-Saharan Africa that are particularly vulnerable to food insecurity, and could help to mitigate its effects. Shraddhanand Shukla and colleagues at the University of California, Santa Barbara’s Climate Hazards Center, present these findings in the open-access journal PLOS ONE.

Climate-driven seasonal drought can impact crop yields and is among major contributors to food insecurity, which can threaten people’s lives and livelihoods. In the last five years, parts of Sub-Saharan Africa have experienced a significant rise in food insecurity, sometimes requiring emergency food assistance. Early warning systems that reliably predict conditions likely to lead to food insecurity could help drive timely actions to mitigate these effects.

Shukla and colleagues hypothesized that the onset date of the rainy season, as calculated from precipitation data, could serve as such a warning. To explore this possibility, they analyzed the relationship between the onset date, drought conditions observed via satellite images of vegetation cover, and the risks of food insecurity based on quarterly reports on food insecurity in across Sub-Saharan Africa from April 2011 through February 2020.

The analysis showed that a delay of about 10 days from the median date of onset of the rainy season was associated with a significantly higher likelihood of seasonal drought in regions with the highest risk of acutesevere food insecurity. A 20-day delay indicated a 50 percent chance of drought in those regions. Further analysis confirmed the predictive relationship between rainy season onset date and drought risk across Sub-Saharan Africa as a whole, and particularly in East Africa.

These findings suggest that the onset date of the rainy season could be an important component of an early warning system for droughts likely to lead to food insecurity in Sub-Saharan Africa. Further research could examine the relationship between onset date and other food insecurity indicators, such as high-resolution data on crop yields and prices or mid-season livestock prices.

The authors add: “Timing of rainfall onset can be tracked using remotely sensed observations and forecasted using climate models, and the results of this study show that it can be a reliable indicator of agricultural droughts, particularly in the most food insecure regions of Sub-Saharan Africa, which makes it a simple yet powerful tool to support effective early warning of food insecurity, thus saving lives and livelihood.”