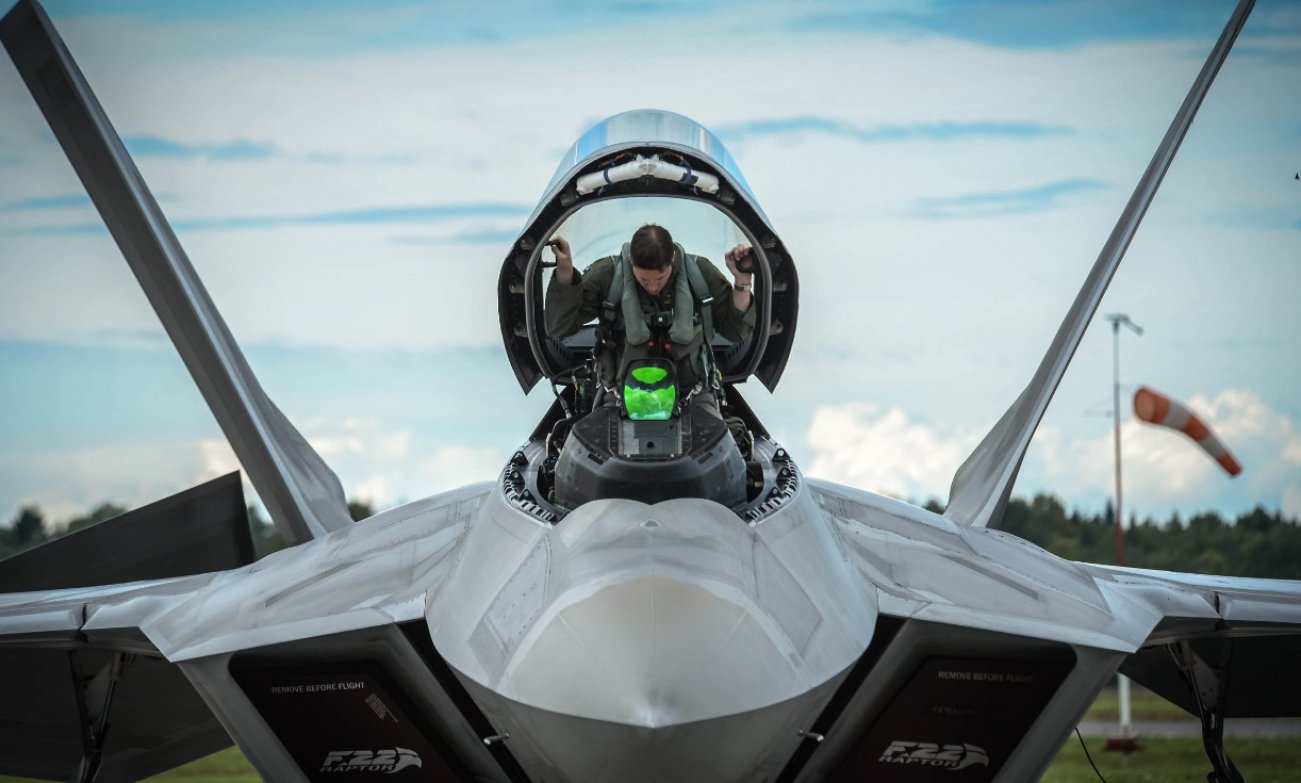 Here’s What You Need To Remember: Air Force Secretary Heather Wilson in mid-March 2019 told lawmakers that the flying branch’s five front-line Raptor squadrons likely would fall short of 80-percent readiness. This despite the flying branch withdrawing F-22s from the Middle East, ending five years of continuous Raptor operations in the region.

A U.S. Air Force wing in Alaska managed to launch 24 F-22 Raptor stealth fighters plus an E-3 radar plane and a C-17 transport, all in quick succession.

The dramatic “elephant walk” at Elmendorf Air Force Base was more than an impressive photo-op. It showed off much of the new, bigger F-22 force at the base, underscored the resident 3rd Wing’s apparently improving maintenance capabilities and underscored the Air Force’s evolving strategy for deploying F-22s and other planes in self-sustaining small groups.

The Elmendorf elephant walk took place on March 26, 2019 during the Polar Force war game. “This two-week exercise gives squadrons an opportunity to demonstrate their abilities to forward-deploy and deliver overwhelming combat air power,” the base stated.

The two dozen F-22s that participated in the mass take-off apparently account for around half of the Raptors that the 3rd Wing’s two fighter squadrons operate.

The 3rd Wing in late 2018 possessed just 42 Raptors. After a hurricane devastated Tyndall Air Force Base in Florida in October of that year, the Air Force began distributing that base’s 55 F-22s to other facilities. Elmendorf got at least six F-22s from Tyndall’s front-line 95th Fighter Squadron.

The 43rd Fighter Squadron, a training unit at Tyndall, temporarily set up shop with 28 F-22s at Eglin Air Force Base in Florida. The Air Force in late March 2019 announced that those jets permanently would relocate to Langley Air Force Base in Virginia, pending Congressional approval.

Langley, which was home to two front-line F-22 squadrons, also took in some of the ex-95th Fighter Squadron Raptors, as did the Air National Guard wing at Hickam Air Force Base in Hawaii.

The Air Force in all possesses no more than 183 F-22s. Concentrating the roughly 120 combat-coded jets — those with the latest software and weapons — into five front-line squadrons instead of six actually has helped the Air Force to better maintain the complex jets.

The Air Force never had enough Raptors to equip six squadrons each with at least 24 planes. Twenty-four is the magic number, by the Air Force’s reasoning. Since fighters often operate in four-plane formations, 24-plane units can launch more sorties than, say, an 18-plane squadron can do.

Moreover, a squadron typically can manage 24 planes as easily as it can manage 18 planes. Thus a unit with more jets makes more efficient use of its manpower. “Larger, traditional Air Force squadrons and deployable units provide a better balance of equipment and personnel,” the Government Accountability Office explained.

Maintaining five, bigger F-22 squadrons instead of six smaller ones could help the Air Force to boost the flagging readiness of the overall Raptor fleet. Since becoming operational in 2005, the F-22 fleet on average has achieved roughly a 50-percent readiness rate — one of the lowest rates of all U.S. fighter types.

That was never really possible for the F-22. Air Force Secretary Heather Wilson in mid-March 2019 told lawmakers that the flying branch’s five front-line Raptor squadrons likely would fall short of 80-percent readiness. This despite the flying branch withdrawing F-22s from the Middle East, ending five years of continuous Raptor operations in the region.

The Elmendorf elephant walk indicated that at least half of the base’s F-22s were flight-ready on March 26, 2019. The 3rd Wing also mans a regional air-defense alert mission, which requires it to launch pairs of F-22s on short notice in order to intercept aircraft — usually Russian — that fly near U.S. air space. The alert mission likely prevented at least four Raptors from participating in the elephant walk.

The presence in the elephant walk of one of Elmendorf’s C-17s is notable. The giant airlifter is a key component of the 3rd Wing’s plan for deploying Raptors during wartime.

Instead of always painstakingly deploying entire 24-plane squadrons or even the whole 48-jet wing, as custom dictated, in 2013 wing officers wrote new procedures for sending a quartet of F-22s plus a single supporting C-17 practically anywhere in the Pacific region possessing a suitable airfield, all within 24 hours of the word “go.”

The aim was for the 3rd Wing, during wartime, to quickly disperse its F-22s across many bases instead of concentrating them at just one facility where they might be vulnerable to, say, a Chinese ballistic-missile barrage.

The wing’s “Rapid Raptor” concept really caught on. The Air Force not only applied the deployment scheme to the other Raptor wings, it also included other plane types such as the F-15C fighter.

In simultaneously marching 24 F-22s and a C-17 — not to mention an E-3 radar plane — Elmendorf proved that, despite the Raptor fleet’s readiness woes and ongoing relocation, the Alaska wing is ready to fight.

David Axe serves as Defense Editor of the National Interest. He is the author of the graphic novels  War Fix, War Is Boring and Machete Squad. (This first appeared in June 2019.)