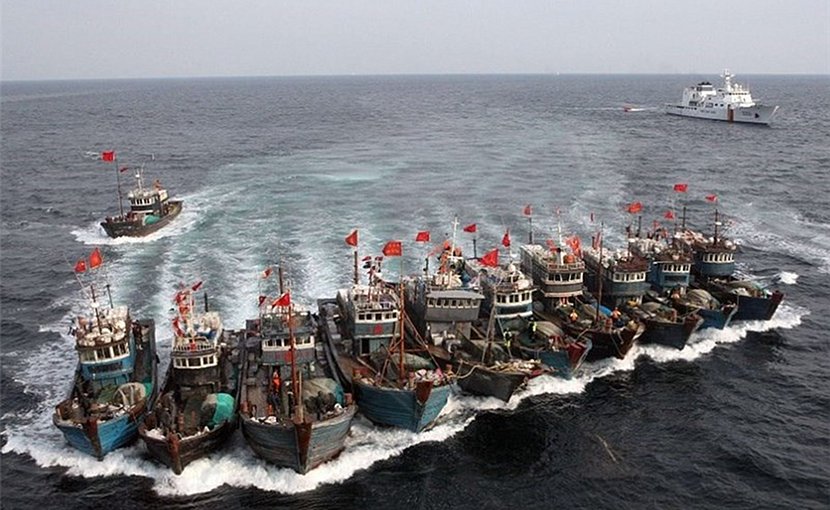 The United States Coast Guard has called out China’s massive distant-water fishing fleet for extractive practices in the waters of its Southeast Asian neighbors and off the coasts of Central America and West Africa.

The criticism came on Thursday as the Coast Guard unveiled an ambitious new strategy for tackling illegal, unreported, and unregulated fishing (IUU), and as Vietnam detained a Chinese fishing boat for intruding into waters off its coast in the Gulf of Tonkin.

Adm. Karl Schultz, commandant of the U.S. Coast Guard, said illegal fishing had overtaken counter-narcotics and anti-piracy as the most important priority for maritime security around the globe, noting that it “threatens a host nation’s ability to protect their stable resources.”

“It’s bigger than catching a few boats with illegal tuna,” Schultz said at the Center for Strategic and International Studies (CSIS), a Washington-based think tank.

“This is really about systemic violations of sovereign nation rights. It’s about threatening sovereignty, economic security, a weakening of the global rules-based order, and that’s why I think the coastguard has an opportunity at this time to put some lines of effort together here to really get after a threat.”

Combating IUU fishing was one issue where both the Obama and Trump administrations sought to take action, said Sally Yozell, director of the Environmental Security program at the Stimson Center, another U.S. think-tank.

“Illegal, unreported, unregulated fishing really hurts honest fishermen,” she said in an interview with Radio Free Asia (RFA), but noted that it was now also being viewed more explicitly as a security concern. BenarNews is affiliated with RFA.

Adm. Craig S. Faller, commander of the U.S. military’s Southern Command – whose area of responsibility covers the Caribbean, Central America and Latin America – said Thursday that the Coast Guard’s combatting of IUU fishing would be part of the U.S. “great power competition” with China.

China has the largest distant-water fishing fleet in the world and is also the number one source of IUU fishing, according to the IUU Fishing Index, which ranks countries on their enforcement practices.

“On the one hand, China is trying to do better on paper. There’s new fishing rules and regulations and all the rest. However, they don’t seem to be enforcing their fleets, which is a really big deal whether it’s in West Africa, the Pacific, or North Korea,” Yozell said.

China maintains it has “historic rights” to nearly the entirety of the South China Sea, including portions of its Southeast Asian neighbors’ exclusive economic zones. China has asserted its claim to the disputed waters with fishing fleets in the past, backed up by its powerful China Coast Guard (CCG).

On Thursday, Vietnam’s coastguard took action in the Gulf of Tonkin where an agreement between Vietnam and China on fishing cooperation expired at the end of June.

Vietnamese state media reported that the coastguard caught two Chinese fishing vessels intruding into Vietnamese waters off the northern city of Mong Cai. One vessel fled and the other was detained along with its nine crew. The vessel and crew were subsequently released.

Another fishing boat sailed within 50 nautical miles of Tuy Hoa, farher north along Vietnam’s coast, on Tuesday. Frequently, Chinese fishing vessels pass through or start to operate in the South China Sea, and turn off their Automatic Identification Signal (AIS) to avoid detection.

China has also been accused of exploiting the waters off the coast of West Africa in the past. The Ghana National Canoe Fishermen Council published an open letter in May accusing Chinese fishing trawlers of masquerading themselves as Ghanaian companies to circumvent local regulations against foreign fishing.

Hundreds of Chinese commercial fishing vessels hovered outside the exclusive economic zone of Ecuador from June through August, logging more than 73,000 hours while fishing for squid in the biodiverse waters off the Galapagos Islands, according to a recent report by the environmental non-profit Oceana.

China’s rapacious squid-hunting fleets have depleted the livelihood of North Korean coastal communities and driven North Korean fishermen to a deadly level of desperation, a landmark report by NBC News found in July.

“It’s pretty much a big issue wherever China fishes,” Yozell pointed out. “There’s just a lot of unreported [fishing]. I’d say that’s the biggest problem in the IUU. A small island state or a less developed state … where they have less capacity to enforce and monitor, may provide a legal license for a foreign vessel to fish for a certain amount. And then that vessel may take two or three or five times as much as they’re supposed to. And that’s the unreported. That’s just taking advantage of countries who are not able to enforce management and quota and licenses.”

The U.S. Coast Guard is apparently honing international partnerships and stepping up its presence in the Pacific to counter this.

The commandant promised a greater presence of its ships, more capacity-building, and more coastguard-to-coastguard cooperation among the Pacific Islands and Oceania, where the U.S. holds overseas territories like Guam and the Commonwealth of the Northern Marianas, and maintains Compacts of Free Association with the Marshall Islands, Federated States of Micronesia, and Palau.

However, Yozell expressed lingering questions over whether the U.S. Coast Guard was capable of carrying out everything promised in its new strategy.