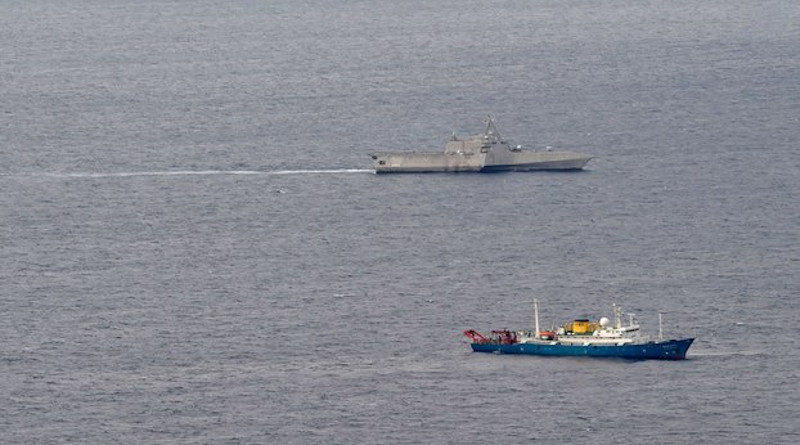 U.S. curbs against Chinese officials and companies suspected of helping Beijing extend its reach in a disputed, resource-rich Asian sea will do little to reduce China’s maritime influence and could indirectly increase it, analysts believe.

The government of outgoing U.S. President Donald Trump on Thursday announced a ban on travel to the United States by officials in the military, the ruling Communist Party and major state-owned enterprises. Washington believes they have used coercion on countries with claims to the 3.5 million-square-kilometer South China Sea.

These penalties, along with others that the Trump administration has used to stop Chinese maritime activities, will hardly dislodge Beijing from the disputed sea, scholars say. They say the targeted people and companies can keep drilling for oil, supplying the military and building infrastructure in the tropical waterway.

“Historically, CCP’s (Chinese Communist Party) policy toward sovereignty issues or territorial issues, they never step back from it, so they will definitely keep their focus on this region,” he said. “They won’t step back because of these economic sanctions.”

The U.S. orders will have no material effect on either the Chinese government or the targeted companies that work in the South China Sea, the analysts say.

“The South China Sea reclamation and building activities will fully engage some of these construction and engineering companies,” said Alan Chong, associate professor at the S. Rajaratnam School of International Studies in Singapore. “I think it’s a win.”

Beijing claims about 90% of the South China Sea and cites historic usage records to back its position. China has used its technological and military superiority over the other claimants to develop islets in the sea, which stretches from its southern coasts to the island of Borneo.

Officials from Beijing could be offering more aid and investment now to the other maritime claimants in case other countries side with the U.S. view that China has used coercion, some experts believe. Brunei, Malaysia, the Philippines, Taiwan and Vietnam contest Chinese claims to the sea that’s coveted for fuel and fisheries.

Chinese Foreign Minister Wang Yi said Sunday in Manila his government would donate COVID-19 vaccines to the Philippines and help it through post-pandemic economic recovery. China had pledged $24 billion in aid to the Philippines in 2016, but citizens of the Southeast Asian country have griped that the money is flowing in too slowly.

A Chinese-invested joint venture announced in late December it had agreed to develop and operate the largest fishing complex in Brunei.

“I think, at best for some countries, it will be seen as ways to generate leverage in their discussions with China, and it could complicate how they manage the relationship between them and China and then between them and the United States.” said Jay Batongbacal, international maritime affairs professor at University of the Philippines.

China might be keen now to offer “concessions” or “favors”, Batongbacal. He said the minister’s visit to the Philippines was aimed at finalizing incomplete deals.

The U.S. placed restrictions last month on Chinese entities and officials that help China “bully other nations” in the sea, the U.S. State Department said last month. Washington makes no claim but looks to Southeast Asia and Taiwan to help keep China in check.

Trump has targeted China over trade, technology sharing and consular issues as well as its maritime expansion.

U.S. President-elect Joe Biden is not expected immediately to overturn rules approved by Trump. He will eventually negotiate with China over the South China Sea rather than taking “unilateral” action, Wang forecast.