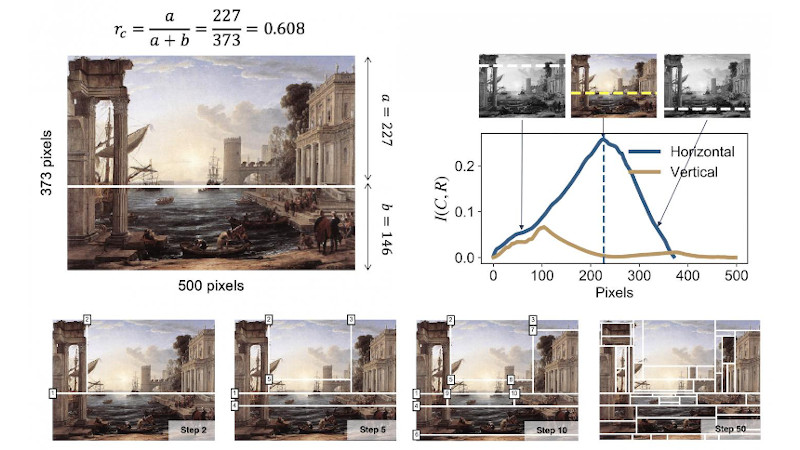 Algorithms have shown that the compositional structure of Western landscape paintings changed “suspiciously” smoothly between 1500 and 2000 AD, potentially indicating a selection bias by art curators or in art historical literature, physicists from the Korea Advanced Institute of Science and Technology (KAIST) and colleagues report in the Proceedings of the National Academy of Sciences (PNAS).

KAIST statistical physicist Hawoong Jeong worked with statisticians, digital analysts and art historians in Korea, Estonia and the US to clarify whether computer algorithms could help resolve long-standing questions about design principles used in landscape paintings, such as the placement of the horizon and other primary features.

“A foundational question among art historians is whether artwork contains organizing principles that transcend culture and time and, if yes, how these principles evolved over time,” explains Jeong. “We developed an information-theoretic approach that can capture compositional proportion in landscape paintings and found that the preferred compositional proportion systematically evolved over time.”

Digital versions of almost 15,000 canonical landscape paintings from the Western renaissance in the 1500s to the more recent contemporary art period were run through a computer algorithm. The algorithm progressively divides artwork into horizontal and vertical lines depending on the amount of information in each subsequent partition. It allows scientists to evaluate how artists and various art styles compose landscape artwork, in terms of placement of a piece’s most important components, in addition to how high or low the landscape’s horizon is placed.

Interestingly, the algorithm showed that these findings were similar across cultures and artistic periods, even through periods dominated by a diversity in art styles. This similarity may well be a function, then, of a bias in the dataset.

“In recent decades, art historians have prioritized the argument that there is great diversity in the evolution of artistic expression rather than offering a relatively smoother consensus story in Western art,” Jeong says. “This study serves as a reminder that the available large-scale datasets might be perpetuating severe biases.”

The scientists next aim to broaden their analyses to include more diverse artwork, as this particular dataset was ultimately Western and male biased. Future analyses should also consider diagonal compositions in paintings, they say.