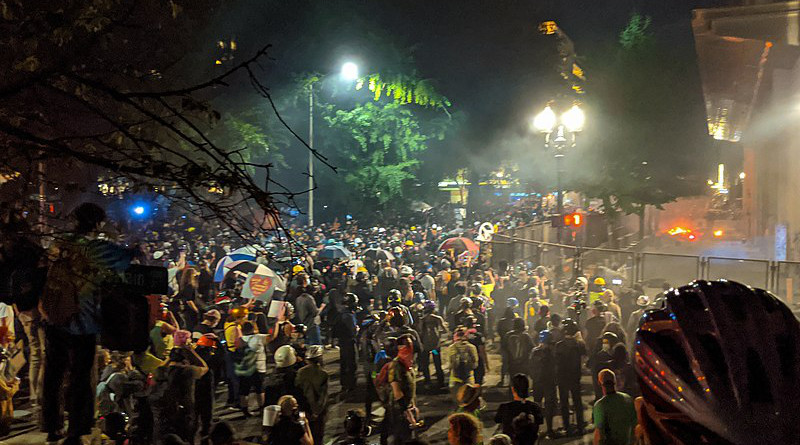 Far-right groups in America such as the anti-government Boogaloo Boys have long used a host of tactics and platforms to incite violence, including dehumanizing memes, online forums and organized militias.

Now, left-wing groups are employing many of the same tactics against police and other targets during the social justice protests since the death of George Floyd, according to a new report by researchers affiliated with Rutgers University.

“Many of the features of anarcho-socialist extremism seem to parallel the key tactical structures documented in libertarian-anarchist and Jihadi extremism,” says the 24-page report, entitled “Network Enabled Anarchy.”

The report underscores that far-left movements such as antifa, while decentralized and seen as less lethal than their counterparts on the far right, are just as capable of turning peaceful protests into violent confrontations with law enforcement.

It comes as President Donald Trump and Attorney General William Barr continue to blame much of the violence at the protests on antifa and anarchists. To date, though, the Justice Department has not charged any left-wing groups in connection with the civil unrest, and extremism experts say while the threat of violence from antifa is real,  organized groups on the far right pose a greater threat of violence.

The report was issued by the Contagion Network Research Institute,  an independent nonprofit that tracks hate on social media. The group lists the United Nations, the Anti-Defamation League and liberal billionaire George Soros’s Open Society Foundations as its affiliated partners.

In an earlier report on the Boogaloo Boys, an anti-government militia, researchers at the Contagion Network looked at more than 100 million social media posts, concluding that Boogaloo messaging, while a joke for some, “acts as a violent meme that circulates instructions for a violent, viral insurgency for others.”

Joel Finkelstein, founder of the Contagion Network and lead author of the report, did not respond to repeated requests for comment.

For the report on anarchist violence, the researchers examined more than 100 million posts on platforms such as Twitter and Reddit, finding a “rapidly growing” online ecosystem of what they call “anarcho-socialist extremism” with ties to rioters in a number of U.S. cities.

Social media memes and code words that dehumanize police such as ACAB, short for “all cops are bastards,” surged during the protests, with Twitter and Reddit seeing 1,000% and 300% increases in postings respectively, according to the report.

“Extreme anarcho-socialist fringe online forums on Reddit use memes calling for the death of police and memes for stockpiling munitions to promote violent revolution,” the report said.

Derogatory anti-police memes also appeared near the sites of demonstrations, with protesters painting them on government buildings, courthouses and fallen statues.

In a statement to VOA, a Twitter spokesperson said, “We welcome the chance to collaborate with external stakeholders on identifying and taking action on attempts to manipulate the conversation on Twitter.”

They noted that on July 25, anarchist networks, using the hashtag #J25, “prepared, executed and propagandized” simultaneous rallies in more than 20 cities, leading to riots in four — Portland and Eugene, Oregon; Richmond, Virginia, and Seattle, Washington.

Among the organizing networks was “Anonymous,” a digital hacker collective; the Youth Liberation Front, which describes itself as a “decentralized network of autonomous youth collectives dedicated to direct action toward total liberation;” and “It’s Going Down,” one of the largest online sources of anarchist news, according to the report.

In Seattle, local anarchist Twitter feeds called for the sacking of a local police precinct, leading rioters to throw explosives and rocks at officers and laying siege to the station.

“Courthouses and police precincts were targeted by agitators in each case,” the report said.

An author and a spokesman for the Anarchist Agency, who uses the name scott crow without capitals, said the report exaggerates the anarchist threat.

“In the report, they’re equating the murder of human beings by the Boogaloo and neo-Nazis with property destruction because people are sick of having boots on their neck,” crow said.

Josh Lipowsky, a senior research analyst with the Counter-Extremism Project, said the decentralized antifa movement poses a lesser threat than the better organized groups on the far right.

“On the far right, we do see more active networks calling for organized attacks on synagogues and other religious institutions, as well as individuals that are deemed the enemy of that ideology,” Lipowsky said.

Last December, the Department of Homeland Security issued a strategic framework on countering terrorism and targeted violence, singling out domestic terrorism as a growing threat.

The article Anarchist Groups Tied To Riots In Four US Cities appeared first on Eurasia Review.